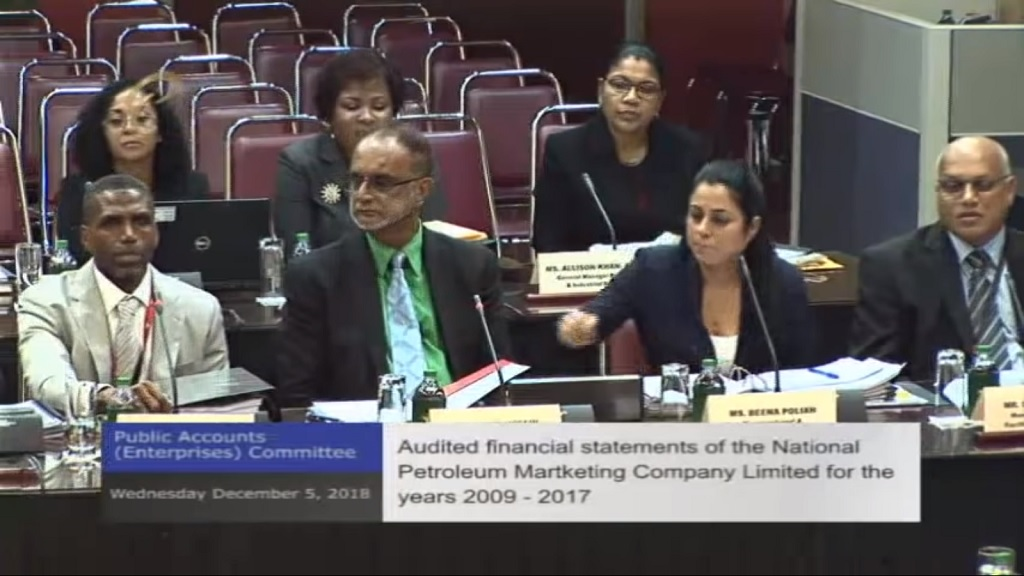 Ministry officials and the Board of NP were questioned over a payment of almost $200,000 for consultant services which the Ministry said it was unaware of.

Speaking during a meeting of the Public Accounts (Enterprises) Committee on NP’s Audited Financial Statements from 2009-2017 earlier this week, committee chairman Wade Mark asked how such a large payment went unnoticed.

Mark raised the issue after it was made known that there was a ‘deficiency’ of expertise within the Board which needed to be filled with the services of a consultant, who was paid a total of $192,000 for work on the Liquid Fuels Pipeline Project.

“Were you aware that NP expended $192K in a transaction that was described by NP as ‘complex and significant’ transaction…that had to do with the imminent transfer of assets from the Liquid Fuels Pipeline Project to the Liquid Fuel Company of Trinidad and Tobago.”

“This is the transaction that occurred and this is where NP did not have the requisite expertise on their board at the material point in time. We are being told in writing that NP had to now go out to acquire that expertise and it cost NP and taxpayers just under $200,000.”

Sheldon Butcher, Director of Downstream Petroleum Management at the Ministry of Energy and Energy Industries, said that the specific transaction was not brought to their attention.

Mark then asked if the Ministry was aware of the deficiency of the Board.

“Were you aware…that there was a deficiency in the composition of the board of NP…but from the perspective of NP not having the appropriate financial expertise in its ranks among its members..were you ever made aware of this deficiency?”

“You are telling this committee you were not aware of the particular consultant engaged by NP? What is your monitoring role as it relates to accountability?

“We’re talking about taxpayers’ money. NP is not a runaway horse where they can do whatever they want. They are under supervision of the Ministry,” Mark said.

However, Permanent Secretary in the Ministry of Energy and Energy Industries, Monty Beharry, said he was not serving in his present capacity at that time and added that no note of the transaction was made in the relevant Board minutes.

“I was not in this capacity at that point in time. With respect to the responses provided by this committee, minutes have been submitted to the Ministry on an average monthly basis. The last monthly board minutes received were from meetings on July 12, 2018 and September 6, 2018. With respect to the knowledge of the transaction, those were recorded or documented in those minutes. The incumbent may have been aware of it, but me, personally, no,” he said.

The Ministry replied however that the transaction may not have been noted as it was not ‘material’ or ‘strategic’ and therefore was not escalated upwards.

NP’s CEO, Bernard Mitchel, said however that adding the expertise was necessary due to the seven-year duration of the project and said a bid was submitted and a ‘reasonable sum’ was achieved given the magnitude of the work.

He said on completion of this exercise NP advised both the Energy Ministry and the Ministry of Finance in terms of the recommendations made by the consultant.