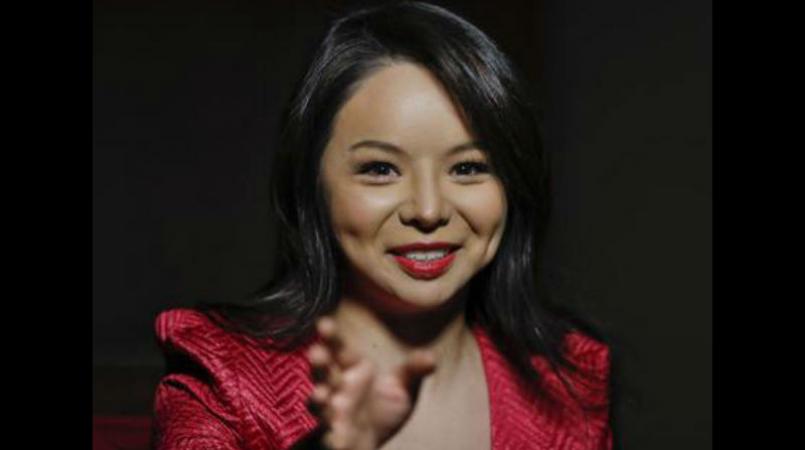 Miss Canada will be vying for more than the winner's tiara when she competes in the annual Miss World pageant in Washington this weekend. Anastasia Lin wants to tell a global TV audience about the evil of organ-harvesting.

Lin was due to compete at Miss World last year when it was hosted by China but was barred from entering the country due to her activism against persecution of Falun Gong, a meditation practice that she follows and that China's government has outlawed.

U.K.-based Miss World is allowing her to compete again this year in the U.S. Some U.S. media organizations say Miss World, which has Chinese corporate sponsorship, has prevented them from speaking to Lin. But she was allowed to speak to The Associated Press in an interview Wednesday in which she spoke forthrightly about her cause, although she sidestepped questions about whether she had faced restrictions.

"Everybody is tied economically with China. China's soft power is so huge that no one really dares to speak up," said Lin, 26, at a hotel just outside Washington at the National Harbor in Oxon Hill, Maryland.

Lin, who was born in China and moved to Canada with her mother at age 13, has riled China's government with her public advocacy. She has alleged that tens of thousands of Falun Gong practitioners have been killed so their organs could be harvested and sold for transplants. She has spoken out at a U.S. congressional hearing, and since her exclusion from last year's pageant in China, she has attracted world media attention and given testimony before the British and European parliaments. She says the Miss World pageant, in which contestants each present a cause or platform, is another opportunity to speak out.

"I'm talking about organs being taken from prisoners of conscience, meaning citizens who have not done anything wrong but to speak their mind and believe what they believe in. It's like innocent citizens being killed for their organs and their body parts sold for profits. It's happening and people need to pay attention to it," Lin said.

Chinese Embassy spokeswoman Fang Hong said the allegations of the Chinese government harvesting organs are "sheer fabrications of the Falun Gong cult." She claimed Falun Gong's "spiritual control" of its practitioners has led many to commit self-mutilation and suicide.

The Chinese government outlawed Falun Gong as an "evil cult" in 1999, saying the group had attracted 70 million followers and was a threat to social stability. As of 2015, the government claimed it was ending the long-standing practice of involuntarily harvesting the organs of executed prisoners for use in donor transplants, and had replaced it with a voluntary donor system, but international medical professionals and human rights advocates question whether that has happened.

Lin says Falun Gong was persecuted because it encouraged independent thought. She says she was inspired to compete for Miss World and use it as a platform for her cause by a previous Miss Canada, Nazanin Afshin-Jam, a human rights activist of Iranian origin who was runner-up in the 2003 contest.

Lin is also an actress. She played a Falun Gong prisoner and organ-harvesting victim in a Canadian-made movie, "The Bleeding Edge," which was being screened late Wednesday at a theater in Washington by the activist group, Victims of Communism Memorial Foundation.

In an apparent sign that the Miss World organization was easing constraints on her, Lin attended the screening. Last Friday, when she met at the State Department with the U.S. Ambassador-at-Large for International Religious Freedom, David Saperstein, a chaperone from the Miss World contest indicated to an AP reporter that Lin risked being excluded from the pageant if she spoke to media without permission.

Lin said she doesn't blame the pageant organizers, as even Western governments are leery of criticizing China.

"Governments are not really speaking out, even for their Chinese citizens outside of China," she said. "Last year when I was banned, the Canadian government did not really take a stand," she said.

Lin said that her father, who lives in China, has faced severe pressure, including multiple lawsuits hurting his business selling medical equipment and has been prevented from traveling from China to attend the pageant. Those allegations could not be independently confirmed by AP.

Beyond the promotional video on her social media feed, Lin said she'll only have a fleeting chance to speak out at the Miss World ceremonies, and that's only if she makes the top 10, but she's determined to stay the course.

"I'm going to stick here to the end because I know that this Miss World final is going to be watched by a billion people around the world, and it's going to be broadcast to China," she said. "I have traveled a long journey to (get) here and I want the people to see me on that show."