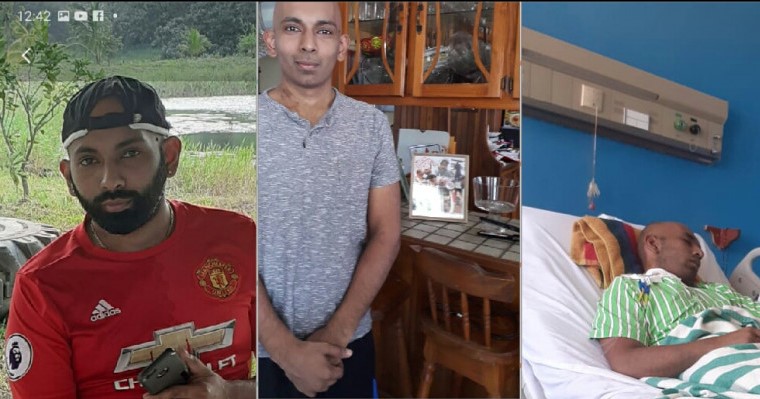 Stephan Persad, 29, who was in dire need of financial donations toward his cancer treatments.

Stephan Persad, despite fighting his Acute Myeloid Leukemia diagnosis for the last six months, has died.

A friend of Persad's posted the tragic message of his passing on Facebook today.

Funds raised for Persad so far, along with ongoing efforts, will still be used to pay off outstanding medical bills accrued during his sickness. The money will also go toward funding his funeral arrangements.

Stephan Persad, mere months ago, was a healthy, active young man. Part of a loving family already, Stephan was getting ready to marry his girlfriend. He played football and routinely exercised.

In January, Stephan’s life took a drastic turn. Starting with a toothache, the 29-year-old and his mother Denyse, went to a dentist. Despite treatments there, he would get no relief from the pain. Resorting to general practitioners, Stephan was sent for a blood exam, then a biopsy.

The results would conclude that Stephan Persad was suffering from Acute Myeloid Leukemia (AML).

In six short months, Stephen’s body has deteriorated to where he has only a few short weeks or months to live if he doesn’t get treatment soon.

Working with a slew of doctors, in both the private and public sector, Stephan’s mother was told his future was grim. AML was causing her son’s white blood cells to multiply much faster than his body could handle. Within days of his diagnosis, Stephan would undergo his first painful round of chemotherapy.

Now, Stephan is back home; but only because his family has run out of funding to accommodate his treatment. Doctors have informed his mother that the only possible treatment to save Stephan’s life is hundreds of miles away at the Johns Hopkins Hospital in Baltimore, Maryland as local infrastructure can't accommodate his condition.

This treatment is set to cost $2.4 million. His mother has since taken to social media to get financial help for her son’s survival.

Speaking to LoopTT today, a sorrowful Denyse Persad described her son’s condition and her decision to bring him home.

Stephan’s body reacted well to the first round of chemotherapy; his mother believes it’s the only reason he’s still alive today. But in order to give her son a second shot at life, she’s calling on the public to help wherever they can.

“People are donating since we put it on the website. People are definitely reaching out to us, they’re praying with us, all good things are coming to him in terms of that, but we’re a long way off from what we need to get to Johns Hopkins,” she said.

Denyse says that as soon as the money is raised, she’ll get her son to the relevant doctors, but she’s been forced to take things one day at a time. The Persad family is praying that the money accumulates before it’s too late.

In order to donate to Stephen’s treatment for AML, you can do a bank deposit through First Citizens Bank at account number #2532627 under the name Denyse Persad or you can click this link to donate through online platforms created by his family.