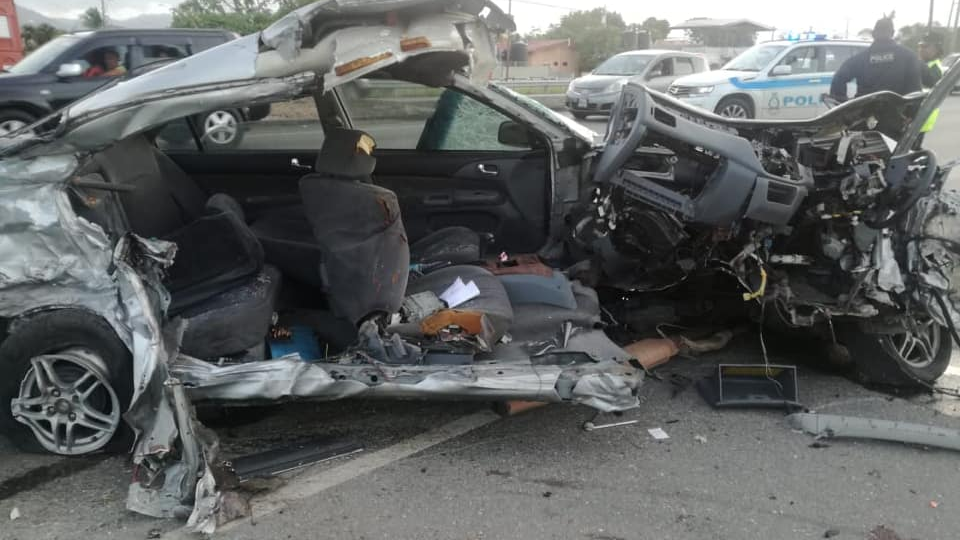 Photo: A vehicle in which 19-year-old Malick Alexander was killed after his vehicle collided with another vehicle on March 30, 2019. Photo via Facebook.

There has been an increase in the number of road fatalities for 2019.

Speaking to LoopTT on Monday, Road Safety Coordinator for the Trinidad and Tobago Police Service (TTPS), Brent Batson, revealed that the road death toll stands at 45 as of Monday (May 6, 2019).

This is an 18 percent increase when compared to 37 for the same period last year.

Batson said that as a result, the police service was working with all stakeholders to bring awareness, education, and enforcement of all traffic laws and regulations, to prevent further loss of life.

This, he said, was of particular importance as today was the launch of the 5th annual UN Global Road Safety Week.

“The focus this year is on pedestrians and pedestrian safety. So we want to highlight this to all involved. We want to ask drivers and pedestrians alike, to be more cautious. If we adhere to the laws of the road, it will be a safer place for all of us,” Batson said.

He noted that part of the initiative this week would include activities such as visiting schools and private sector companies throughout the country.

He also noted that the State had indicated that they would seek to repaint/upgrade several key pedestrian crossings throughout the country.

This year, several people have been killed in gruesome accidents, some involving public officials:

A horrific accident involving a PTSC bus resulted in the deaths of two people and injuries of several others after a truck reportedly lost control and collided with a truck carrying bottled water. The truck then collided with the bus, resulting in two deaths and numerous injuries.

On January 22, 2019, 82-year-old Genora Margaret Sandy was a passenger in a vehicle which was crossing the Priority Bus Route (PBR) when a Trinidad and Tobago Defence Force truck slammed into the vehicle. Sandy succumbed to her injuries.

Video footage showed the moment of impact; the public has called for an investigation into the incident.

In another incident, on March 22, a pedestrian was attempting to use a crosswalk along the PBR near Barataria when a marked police vehicle was seen colliding with him; video footage showed that 73-year-old Michael Barry's body was thrown some distance away due to the force of the impact.

Both officers involved in these incidents were reportedly banned from driving police vehicles during the investigations. The officer involved in this incident was later released after questioning.

In yet another incident involving the police, Shervon Madina was walking along the sidewalk in Diego Martin when a vehicle, driven by a Special Reserve Police (SRP) officer, plowed over her, killing her.

In another unrelated incident, 19-year-old teenager Malick Alexander was killed after his vehicle collided with another vehicle on March 30, 2019.

Investigations into these incidents are continuing.