More storms ahead: NOAA warns of 'above normal' hurricane season 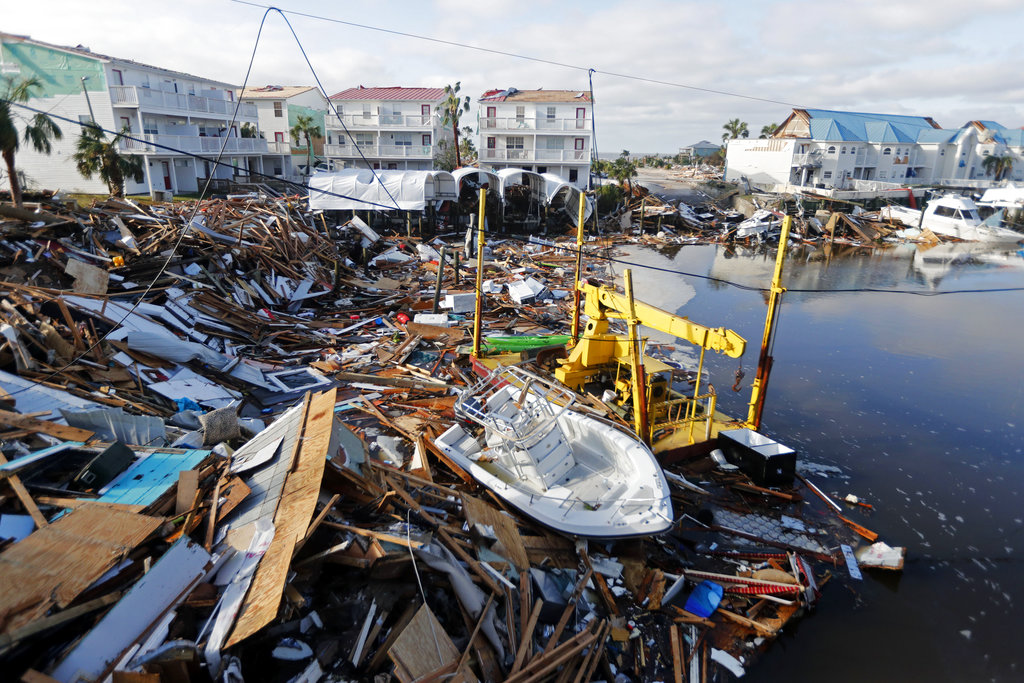 Photo: Hurricane Michael, a category 5 storm which occurred in October 2018, caused approximately US$25.1 billion in damages in the US, and more in the Caribbean and Central American regions.

The Caribbean is warned to be on the lookout for more storms during the 2019 Atlantic Hurricane season, according to a revised outlook from the US National Oceanic and Atmospheric Administration (NOAA).

In a statement issued August 8, 2019, the NOAA updated its Atlantic Hurricane outlook to above normal and expects between 10 and 17 storms, five to nine hurricanes and between two and four major hurricanes.

So far, two named storms have formed and the peak months of hurricane season – August to October – are now underway. 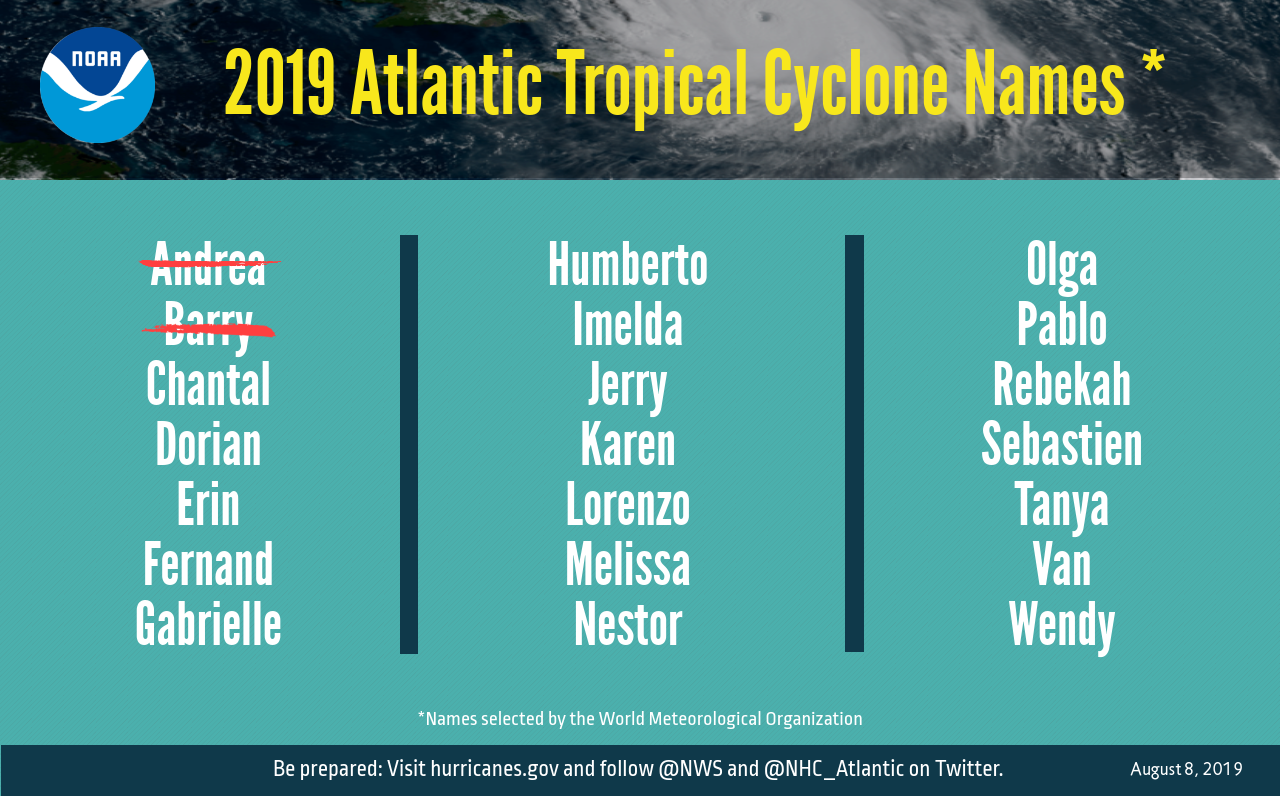 Seasonal forecasters with NOAA’s Climate Prediction Center have increased the likelihood of an above-normal Atlantic hurricane season to 45% (up from 30% from the outlook issued in May).

“NOAA will continue to deliver the information that the public depends on before, during and after any storms throughout the hurricane season,” said Neil Jacobs, Ph.D., acting NOAA administrator.

“Armed with our next-generation satellites, sophisticated weather models, hurricane hunter aircraft, and the expertise of our forecasters, we are prepared to keep communities informed to help save lives and livelihoods.” 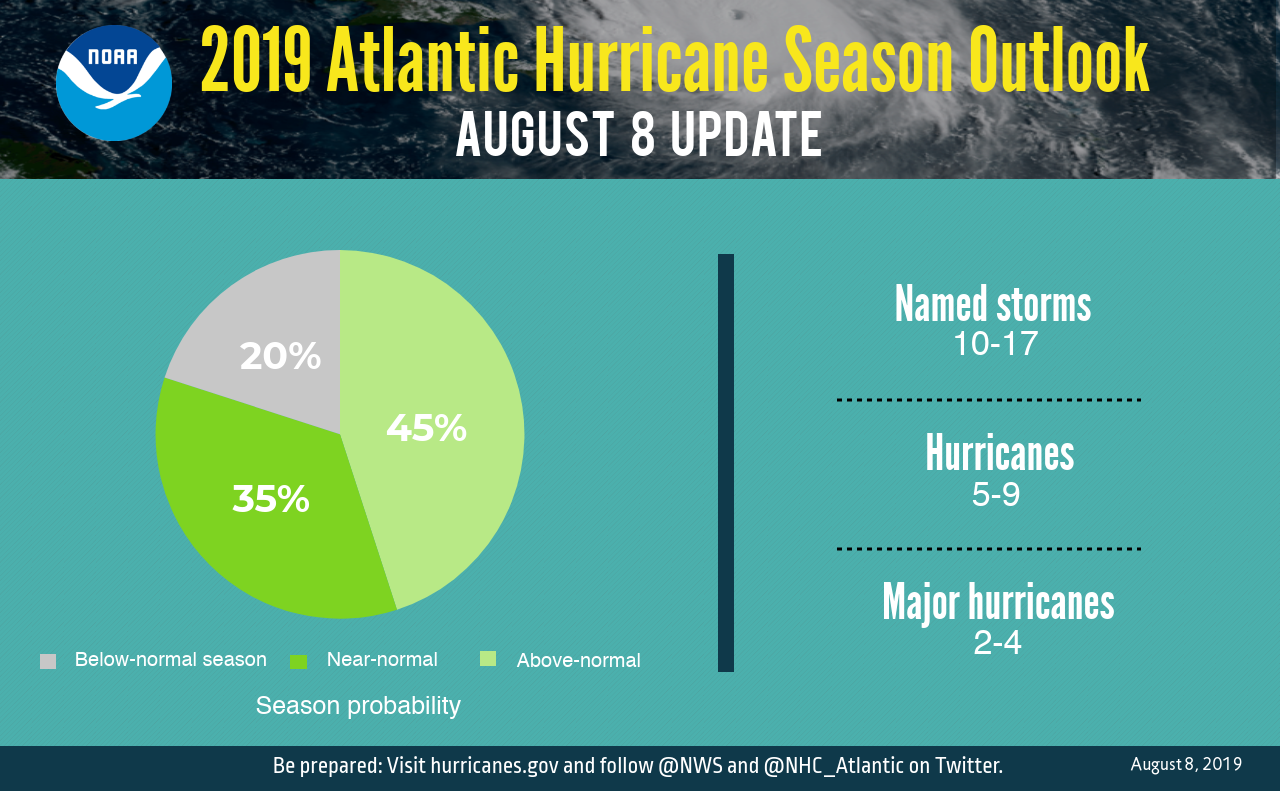 This updated outlook is for the entire six-month hurricane season, which ends November 30, 2019.

The NOAA added that the El Nino weather pattern in the Pacific Ocean has ended and neutral conditions have returned. “El Nino typically suppresses Atlantic hurricane activity but now that it’s gone, we could see a busier season ahead,” said Gerry Bell, Ph.D., lead seasonal hurricane forecaster at NOAA’s Climate Prediction Center. “This evolution, combined with the more conducive conditions associated with the ongoing high-activity era for Atlantic hurricanes that began in 1995, increases the likelihood of above-normal activity this year.”

NOAA’s hurricane season outlook is for overall seasonal activity and is not a landfall forecast. Landfalls are largely determined by short-term weather patterns, which are only predictable within about a week of a storm potentially reaching a coastline.

“Today’s updated outlook is a reminder to be prepared. We urge everyone to learn more about hurricane hazards and prepare now, ahead of time, so that if state and local authorities announce evacuations in advance of a storm, you and your family will have planned where to go and what to do to stay safe.”

This week, the FEMA Ready Campaign and its federal partners released videos that show the deadly threat from tropical weather, specifically hurricane storm surge and flooding, to help emphasize the importance of following the instructions of state and local authorities in advance of a storm.

The 15, 30 and 60-second video clips are available for broadcast or social media distribution and complement additional storm surge resources from NOAA.