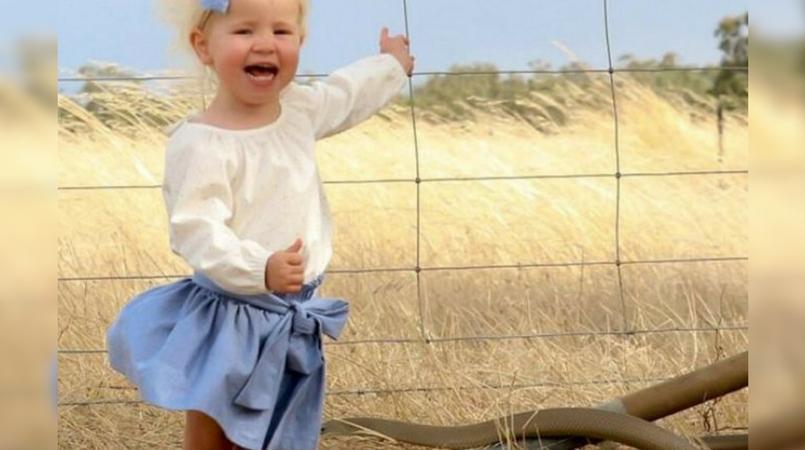 Bianca Dickinson and two of her children had been waiting at the bottom of the family's one-kilometre long driveway, in Kaniva near the Wimmera region in Western Victoria in Australia, for her eldest children to arrive on the school bus.

They were there for 15 minutes, playing and taking photos.

"I was looking through my camera lens and was looking at my daughter. I saw something move in the corner of my eye and actually thought it was bark coming off the tree — yesterday in Victoria it was quite windy — I then looked up to see where the bark had gone," Ms Dickinson told ABC.

She realised the "bark" was in fact a snake, and when she looked again the snake had moved past her daughter, but was still close by, close enough to put her toddler in danger.

Molly was completely unaware and just excited to see her older siblings get off the school bus, hence the big smile.

"All my instincts wanted to run and pick her up and scream and run away," Ms Dickinson said.

"I stayed still and luckily so did she and it just slithered off."

It was not until Ms Dickson and her children got into the car that her 13-year-old daughter Imogen asked her: "What happened? Did you see a snake mum?"

That was when Ms Dickson checked her phone and realised she had unwittingly captured a photo of her daughter standing dangerously close to a brown snake.

The mother said she had checked the spot, which they regularly waited at, for hazards and also assumed it was too cold for snakes to be around.

Ms Dickson said the experience had frightened her and her children, who did not "want to go outside at the moment".

"I couldn't believe it, I can't even look at it to be honest, it's still terrifying," she said.

Mr Dickson said she was not sure if the photobomber was an eastern brown or king brown snake.

Molly, the toddler, is still blissfully unaware of her close call with a venomous snake.

"She didn't realise the snake was there and still doesn't understand what happened, which is good, and maybe in years to come she'll have a look at it and see how lucky she was to escape."