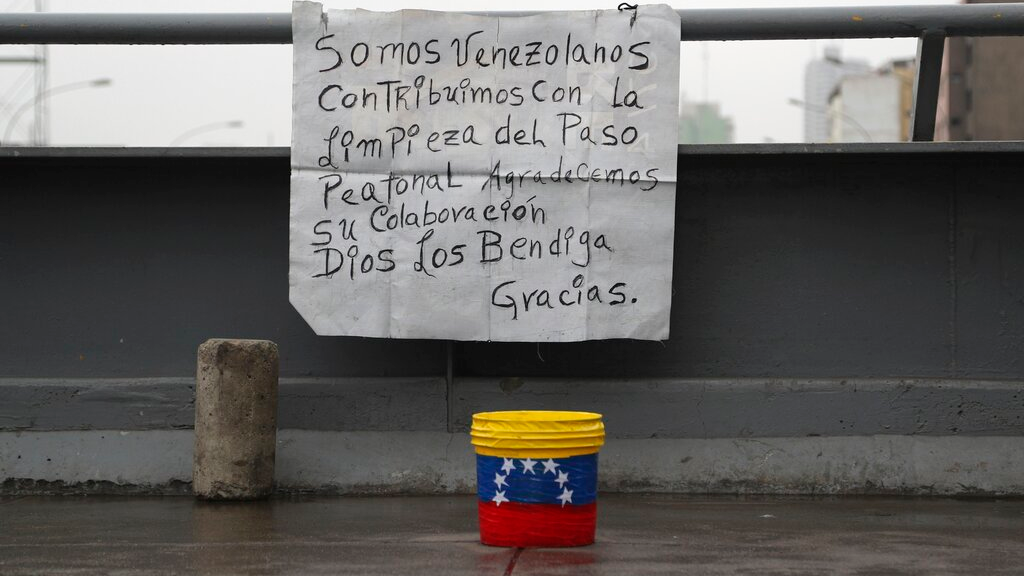 In this October 8, 2019 photo, a sign asking for money in exchange for keeping a bridge clean hangs in Lima, Peru. The sign reads in Spanish "We are Venezuelans. We contribute to the cleaning of this pedestrian pass. We appreciate your collaboration. May God bless you. Thank you." (AP Photo/Martin Mejia)

Freddy Brito had just finished belting out tunes on a bus in Peru's capital and was crossing a street on his one good leg when the driver of a blue taxi sped up and veered toward the singer.

"Veneco!" the man yelled, using a derogatory word for Venezuelans. "Get out of here!"

Brito narrowly dodged the car, but it still brushed his body and sent his prized blue cassette player filled with the songs that in a previous lifetime made him almost famous in Venezuela tumbling to the ground.

"If the angels hadn't watched over me, I would have been run over," he said.

In recent weeks, several videos on social media in Peru have shown migrants being assaulted, threatened or harassed, sparking concerns that xenophobic attacks on the newcomers are mounting.

United Nations data points to an uptick in the number of Venezuelan migrants and refugees who report experiencing discrimination in South America, where the majority have settled. Though difficult to quantify, Peru, in particular, has become a hot spot. A recently established hotline documented 500 incidents in a single two-week period.

"It has been rising in recent months," said Federico Agusti, the UN refugee agency's Peru representative. "The principal cause seems to be fear of the other and certain stigmas that are developing, which generate discrimination."

The incidents range from housing evictions and wage theft to violent threats and assaults.

In one video, a young Venezuelan woman is whipped by assailants on a dark street, leaving deep purple bruises across her thighs. In another, men dressed in military uniforms announce on a loudspeaker that they won't let "another miserable Venezuelan" into Peru. In a third, a young man pleads with a dozen officers surrounding him not to take away the small box of chocolates he is trying to sell to make a living.

"How am I going to eat now?" he says on the verge of tears.

Those and other incidents have struck a nerve throughout the region. Human rights workers warn that a number of the conditions typically associated with a rise in xenophobia are now at play. Several nations with large numbers of Venezuelan migrants are experiencing political upheaval and economic slowdowns while simultaneously announcing new policies aimed at restricting entry.

"It's not surprising that rising levels of people arriving to countries with economies that are not prepared to absorb that workforce lead to this situation," said Tamara Taraciuk Broner, acting Americas deputy director for Human Rights Watch. "It's one of the biggest concerns we have."

Brito and his wife fled Venezuela a year ago as it became increasingly difficult to feed their six children. Once part of a popular merengue house band, Brito said Venezuela's crushing economic crisis made it impossible to advance his music career. The family also worried about their security in a country where robberies and kidnappings are frequent. 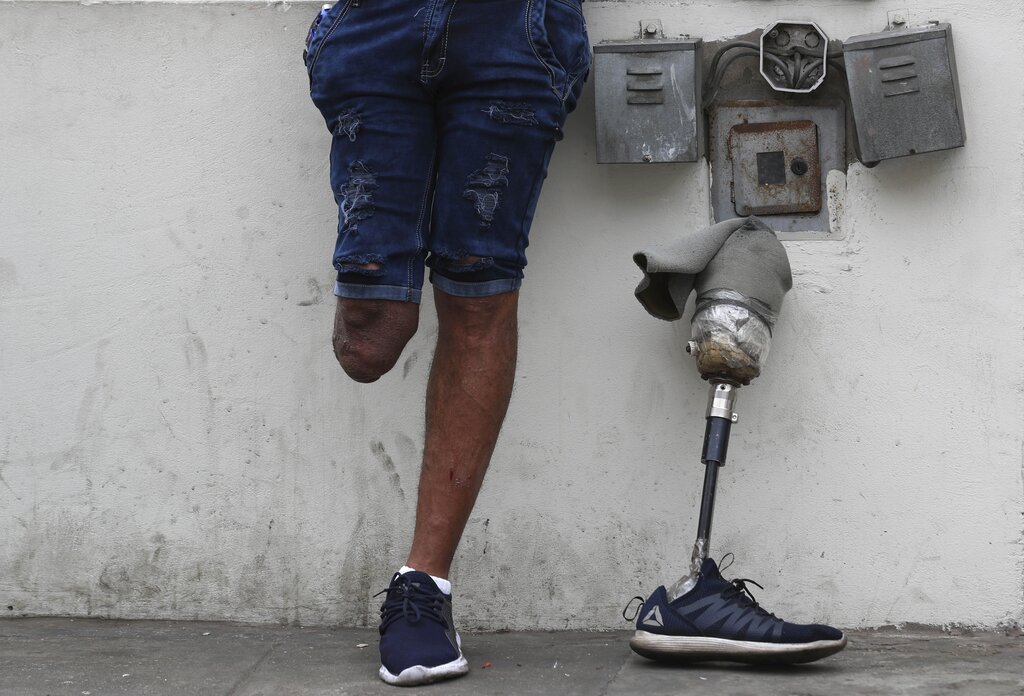 In this October 6, 2019 photo, Venezuelan migrant Freddy Brito, stands next to his prosthetic leg at the homeless shelter where he is living with his wife in Lima, Peru. (AP Photo/Martin Mejia)​​​​​​​

Having lost a leg from being shot while at a party in his 20s, Brito said thieves even once tried to make off with his prosthetic limb as he sat on a bench near his home.

"That leg must be worth something!" he recalls them commenting as they unsuccessfully tried to remove it after demanding his watch and wedding ring.

The prosthetic leg attaches to his right knee and requires a liner that should be replaced every six months but is now three years old. It cuts into his skin so painfully that he chooses not to wear it, hopping around Lima on one foot instead.

Ruth Guillen, his wife, took a job at a salon when they first arrived. She said some clients refused to let her touch their hair because she is Venezuelan. She said the family has been abruptly removed from two apartments on account of their nationality. They now live in a church shelter.

"You come here with dreams," she said. "And when you arrive you find something else."

An estimated 4.5 million Venezuelans have fled their nation's economic and humanitarian catastrophe in recent years, according to the UN. About half of those are now residing in just two countries: Colombia and Peru.

U.N. refugee agency interviews with Venezuelan migrants across Latin America show 46.9 percent have felt discrimination, up from 36.9 percent earlier this year. In Colombia, 51.7 percent reported discrimination, while in Peru about 65 percent said they had felt largely nationality-based rejection.

Though relatively small sample sizes, the numbers offer a lens into a complex phenomenon.

Around the globe, anti-refugee and migrant rhetoric has been growing. The influx of foreigners has stoked tensions in Europe, and in several nations, including the US, politicians have risen to power dismissing refugees as criminals.

"What we see more broadly are increasingly restrictionist government policies and increasingly emboldened groups that otherwise would have been less willing to carry out acts of this nature," said Sarah Deardorff Miller, a senior fellow at Refugees International.

The government of Peru is working with the Venezuelan ambassador appointed by that country's opposition to document and investigate cases, but high-ranking officials have rejected the notion that restricting entry in itself leads to xenophobic behaviour.

"There's no evidence that shows the government has fueled any act of xenophobia," Peruvian Prime Minister Vicente Zeballos said recently.

Carlos Scull, the envoy, said he is urging officials to regularise the status of tens of thousands of Venezuelan migrants who do not have permission to work as one step that could potentially help foster better relations with Peruvians.

"We don't think Peru is a xenophobic country," he said. "But obviously there are small focal points of discrimination."

Agusti, the UN representative, said advocates are also working to combat misleading media coverage that has created a widespread perception that Venezuelans are responsible for rising crime. He said statistics from Peru's prisons agency indicate that just five of every 10,000 Venezuelans living in the nation have been imprisoned and accused of a crime.

"The vast, vast majority are not connected to crime," he said.

Brito, for his part, tries not be affected by the disparaging remarks he sometimes hears.

On the day he was nearly run over, he walked home, cleaned himself up and went back out singing. It was his youngest son's birthday, and he was trying to collect enough money to buy him a bike.

Soon after, he penned a song in tribute to Peru.

"I think Peru is a paradise," the song begins. "If I'm born again, this is where I'll begin."