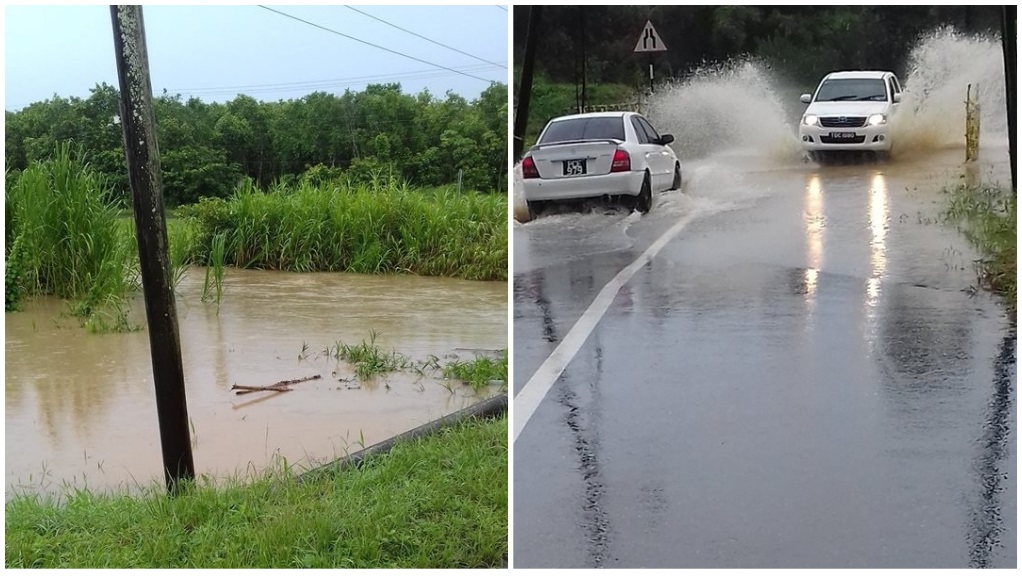 Photo: Images of the Caparo River which burst its banks after torrential rainfall on August 13, 2018. Caparo/Mamoral councillor John Lezama said no dredging was done since 2015, however Minister Rohan Sinanan said work is scheduled to be done soon.

Video footage showed riverine flooding and muddy water collecting along the roadways and in homes, including that of Councillor John Lezama.

Meanwhile, access in Gran Couva is threatened after part of the road collapsed on Monday, a situation Councillor Lezama said is urgent. 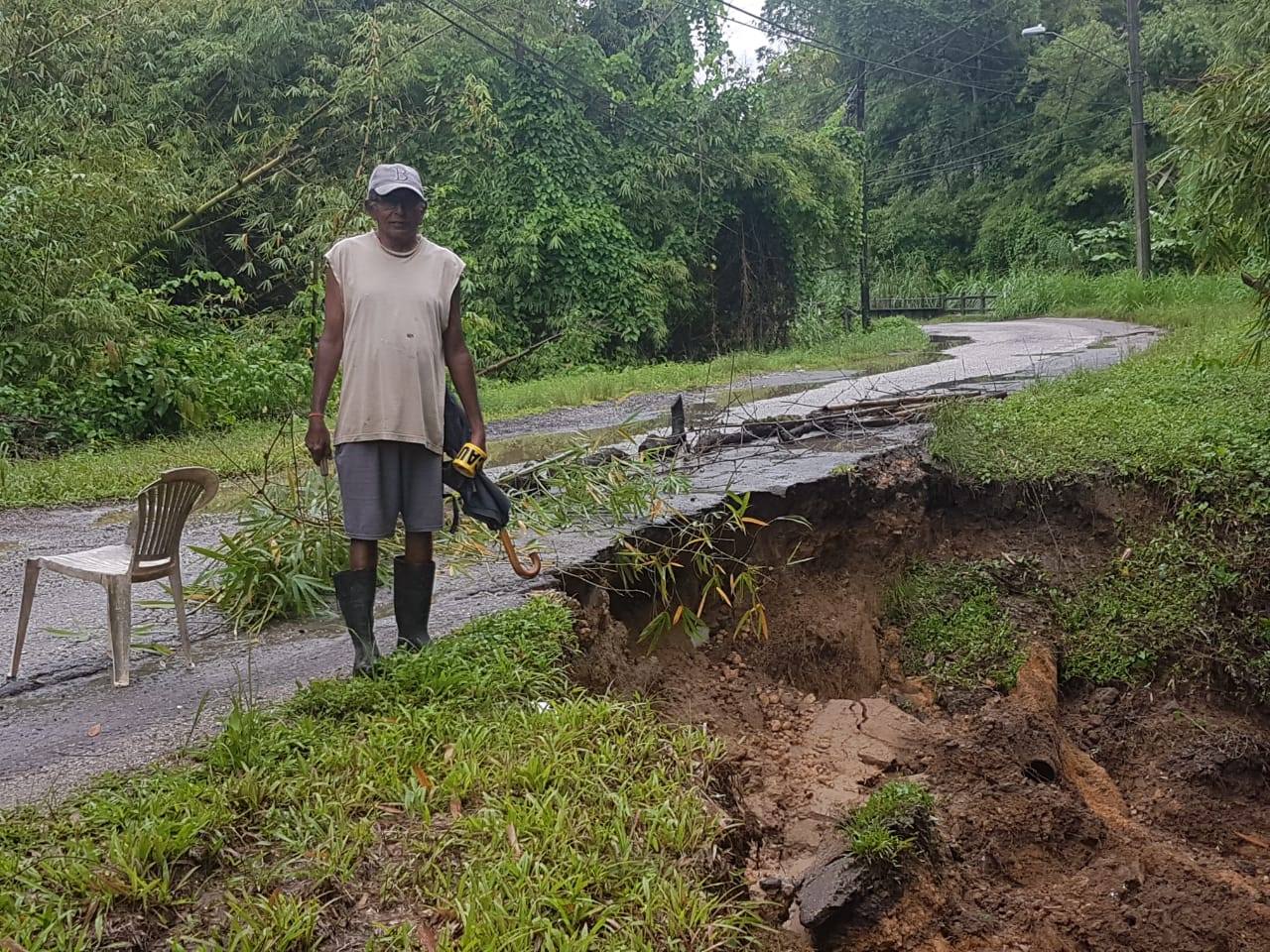 (Photo: Heavy rains caused the partial collapse of Gran Couva Main Road on August 13, 2018. Councillor John Lezama said this landslip is a 'disaster waiting to happen' and called for the Ministry of Works and Transport to address this immediately.)

Lezama said officers of the Disaster Management Units (DMUs) have responded and were on the ground on Tuesday assessing damages.

The shortage of water due to water treatment facilities affected by flooding also inhibited clean-up efforts, however, the Water and Sewerage Authority (WASA) said this would be resumed on Tuesday.

Minister of Works and Transport, Rohan Sinanan, said to Loop News on Tuesday that the Ministry has been carrying out a series of work along the country’s waterways and that the next phase of the work, which includes the Caparo River, is about to begin.

“We have a programme that is ongoing throughout Trinidad and Tobago and it is in three phases. I understand that the Caparo River, some work was done in the area but that work was in Phase Three, (the next phase of the) work is about to start.”

“We looked at the most critical areas in Phase One, and that has been completed. My information from the Director of Drainage is that area is being addressed,” he said.

Sinanan added that as the Caparo area is low-lying, this may also attribute to the high water levels.

“Remember the Caparo area is a low-lying area, it is known as the Caparo Basin, what happened is that with the volume of water yesterday, the river would have burst its banks and that is why that area had that amount of flooding.

“The volume of water in the rain that fell was a significant amount, also, the water from all the other areas also has to go down to the low-lying areas before entering the ocean. Most of the water would have subsided except for the low-lying areas, and those areas are also draining off this morning,” he said. 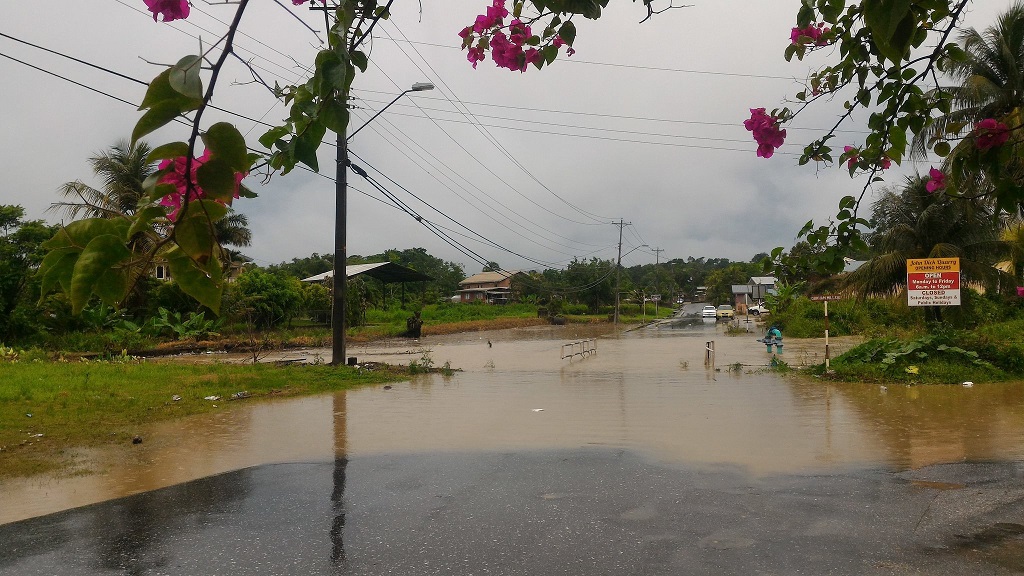 Caroni Central MP Bhoendradat Tewarie lashed out at Works and Transport Minister, Rohan Sinanan, saying he had been pleading for the Caparo River to be dredged before this happened, but his words were not heeded.

“The Caparo Main Road, Sharpe Road, Santa Phillipa, Todds Road Junction and Carr Road are all flooded making it impossible to get in and out of the Caparo area.”

“I am distressed that this is happening in Caparo again, especially because I have been speaking to the Minister about this matter for months-- the dredging of the Caparo River --as well as Ministry of Works officials in charge of drainage and dredging--' who have all not done what they have been promising to do.” 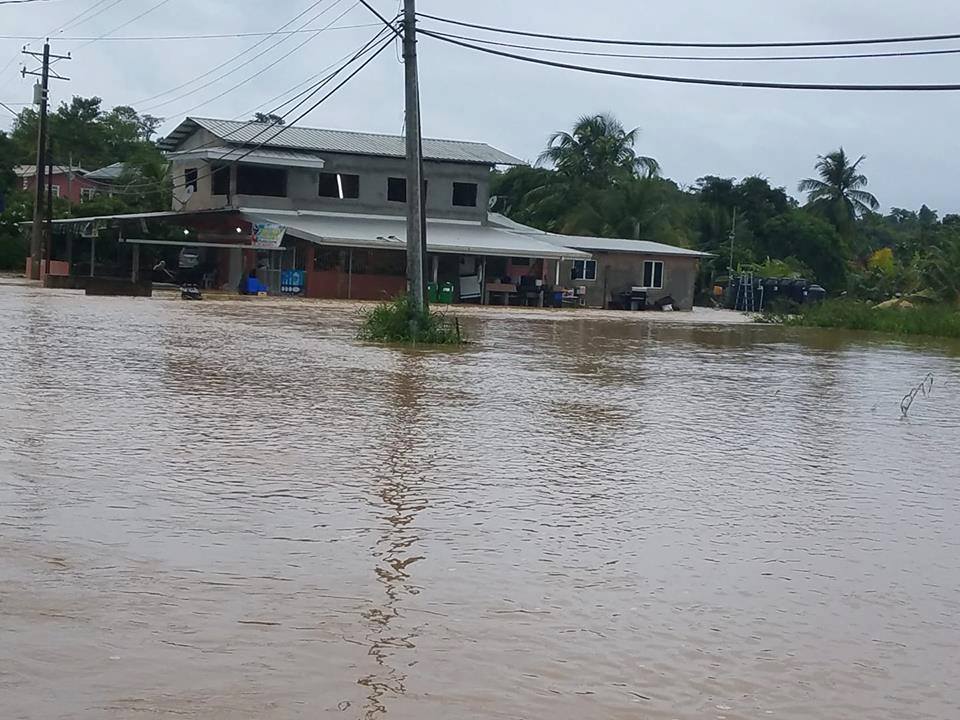 (Photo: Heavy flooding in 2017 led to much of Caparo being underwater for several days. Cars were washed away and power lines were destroyed after heavy rains in June 2017. Image courtesy Sheldon Salisha Mayday‎.)

Tewarie said he also wrote letters to the Ministry of Works and Transport specifically on this issue.

“I admit that there is a lot of rain but the Ministry has wasted precious time and sat on their hands waiting for the rain to come instead of dredging the Caparo River and the feeders to it.”

“I am fed up of visiting flood victims when the Ministry of Works can do something but for whatever reason will not do what is required. We should be working to address the flooding before it happens not just wait to respond to distress.”

“It is not to sit down and wait for disaster when you know in advance what is coming if you wait and do nothing. What is the point of doing nothing? For God’s sake, for the sake of the people, their lives matter,” Tewarie said.

He added that the river should be cleaned before the next series of heavy rains.

"I hope the rain is not intense and severe today and that the quantity of water in the watercourses subsides. Ministry of Works please do what you should be doing in the Caparo and Sharpe Rivers before the next set of rains come."

"The people of Caparo deserve better treatment and action BEFORE a crisis," he said.

Councillor: Caparo flooding could have been averted

Longdenville/Talparo councillor Ryan Rampersad said the situation could have been averted had the rivers been dredged properly.

“We have been calling for some time for the waterways to be cleared, but that was not done and this is the result.”

Rampersad said the roads are passable and flood waters have been able to subside as there were no additional heavy rains, however the clean-up process is limited as residents are mainly tackling this on their own.

“There are less boots on the ground this time as compared to the last serious flooding situation, which was back during Divali last year. We are not seeing as many people on site to assist, there are no CEPEP workers so it’s mainly the residents who are left to struggle on their own,” he said.

Rampersad added that the issue of dredging must be taken up by the Ministry as the regional corporations cannot afford to undertake projects of that magnitude.

“I want the public to know that if the Minister says that the dredging is a regional corporation matter, please be aware that the clearing of major rivers falls under the purview of the Ministry, and with regard to the minor rivers, we simply do not have the funding at this time for a project of that magnitude, we need the Minister to clear these waterways before the next heavy rains."

"We cannot go on simply giving residents a mattress and some supplies with the kind of damage they have experienced in their homes. We need to act to prevent that from happening now,” he said.

Persons affected by flooding during natural disasters such as flash and riverine flooding are urged to contact their local Disaster Management Unit hotlines as follows: