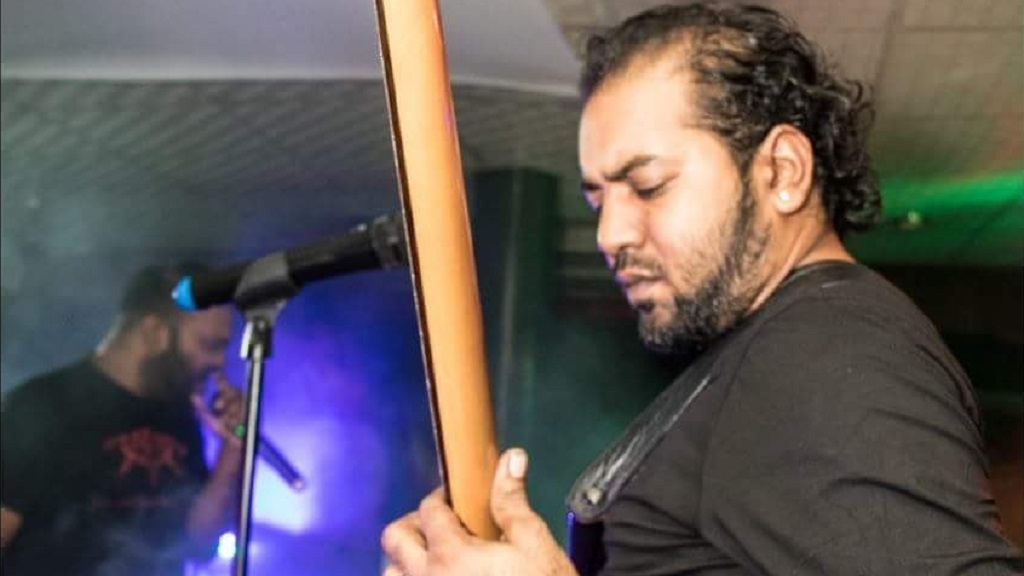 Photo: Shivie Ramdhanie was brutally shot and killed while liming in a bar in Penal on October 3, 2018.

Relatives, friends and the musical community are mourning the brutal killing of local musician Shivie Ramdhanie, who was gunned down by armed men at a Penal bar on Wednesday morning.

According to initial reports, Shivie Ramdhanie, who was a member of local rock band Bon Cane, was at Trooper’s Bar at Sanahee Trace, Mohess Road, Penal, just after midnight on Wednesday morning.

Three armed men then entered the bar and began shooting.

CCTV footage shows the friends liming at a table at the bar when an armed, masked man walked up to the table and started firing.

Video footage showed the armed attacker shooting Ramdhanie multiple times in the back of the head, killing him instantly.

The armed men then escaped in a white Nissan Tiida, which was later found abandoned in Tulsa Trace, Penal.

Another person who was shot in the leg was taken to hospital for treatment.

The bar said via a social media post that on September 24, five young men broke into their gambling machines and shared video footage of the alleged perpetrators.

(Video: CCTV footage shows a man firing on a group at the bar on October 3, 2018, shooting one man in the back of the head. Subsequent footage (after 15 seconds) was shared by the bar on Facebook showing persons who allegedly broke into the gambling machines on September 24, 2018. Video footage via Facebook.)

“We woke to terrible news that we are still trying to come to terms with. One of our brothers, bassist in local metal band Bon Cane, Shivie Ramdhanie, was senselessly killed early this morning.”

“Deepest condolences go out to the members of Bon Cane, to Shivie's friends and his family. May everyone Shivie's life touched find some sort of comfort in this tragic time. Rock in Peace Shivie,” the group said.

The band was due to tour Guyana and Suriname at the end of October.