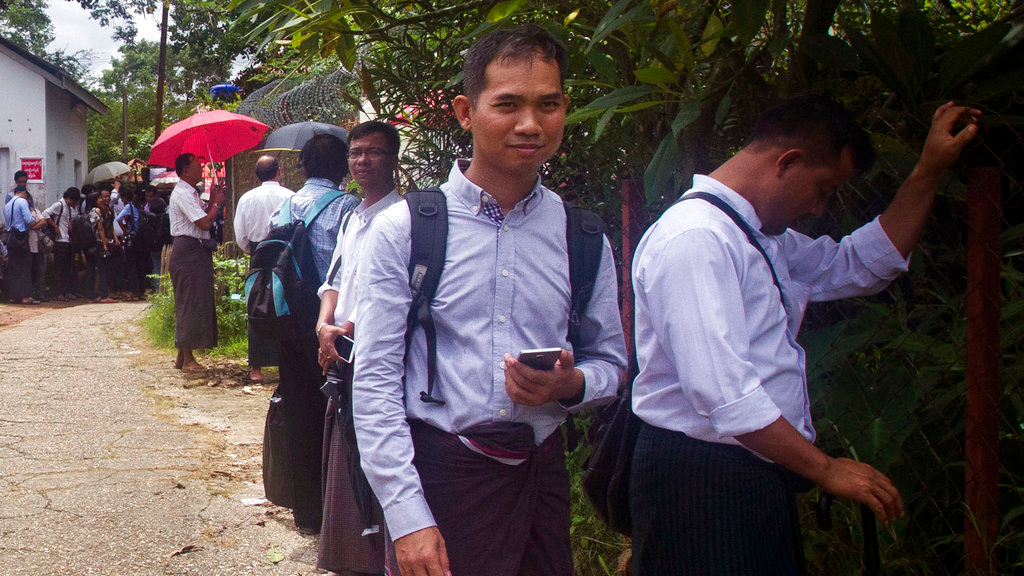 In this Friday, June 23, 2017, photo, Swe Win, second right, an editor of the nonprofit online news outlet Myanmar Now, waits with other journalists for trial of The Voice editor Kyaw Min Swe outside a township court in Yangon, Myanmar.

Police in Myanmar have detained a prominent journalist, accusing him of attempting to flee the country shortly before his trial on defamation charges brought by a follower of a Buddhist monk who has stirred up anti-Muslim hatred.

The detention of Swe Win, the editor of the nonprofit online news outlet Myanmar Now, is the latest in a recent series of actions against journalists in the country that rights advocates say violate freedom of expression.

"Swe Win is a principled journalist with a towering reputation for exposing injustice," Matthew Smith, head of the group Fortify Rights, said in an emailed statement. "This is yet another feeble attempt to criminalize journalism. Journalism is not a crime."

Swe Win was taken by police on Monday to the central city of Mandalay. His lawyer said he was detained Sunday as he prepared to board a flight to Thailand to make arrangements for the news service's operations while he is involved with his trial.

Kyaw Thu, a Mandalay police officer, said that Swe Win was released on bail and that the court will begin hearing his case on Aug. 7, several days after it had been scheduled earlier.

The complaint against him was made by a follower of Wirathu, a Mandalay-based Buddhist monk best known for his provocative speeches about Myanmar's Muslim minority. An organization led by Wirathu, Ma Ba Tha, has been accused of stirring up sentiment against Muslims, leading to deadly violence.

Swe Win criticized Wirathu on social media, accusing him of violating the Buddhist code of monastic discipline for his comments about the killing of a prominent Muslim lawyer who was a legal adviser to the ruling National League for Democracy.

Last week, a court began proceedings against three journalists who have been charged with violating a law that provides up to three years' imprisonment for people who assist groups that are deemed illegal.

The journalists, from the Democratic Voice of Burma and The Irrawaddy, both multi-format news services, were arrested June 26 after returning from a drug-burning ceremony organized by the Ta'ang National Liberation Army, an ethnic guerrilla group that is fighting the government.

Also in June, a case was launched against a newspaper's chief editor for allegedly defaming the military by publishing an article mocking its role in the country's efforts to reach a peace agreement with fractious minority groups.

Kyaw Min Swe, chief editor of The Voice Daily, was charged after a lawsuit filed by the military.

Swe Win, like Kyaw Min Swe, is being prosecuted under a broadly defined article of the Telecommunications Law that sets a prison term of up to three years for material judged defamatory that is transmitted over any telecommunications network, including online. The law has been used under both military and civilian governments to prosecute critics, journalists and political activists who have spoken out against the authorities.

Myanmar emerged from a half-century of brutal military rule in 2011, and after Nobel Peace laureate Aung San Suu Kyi's party won a landslide victory in 2015 elections, many local and international watch groups expected her rise to bring a new era of freedom of expression and improvements in human rights.

"The number of lawsuits under this controversial law is, I think, the highest in history and it's dramatically and dangerously increasing," said Maung Saungkha, a poet and activist and member of the Telecom-Research team who served six months in prison after being charged under the law.