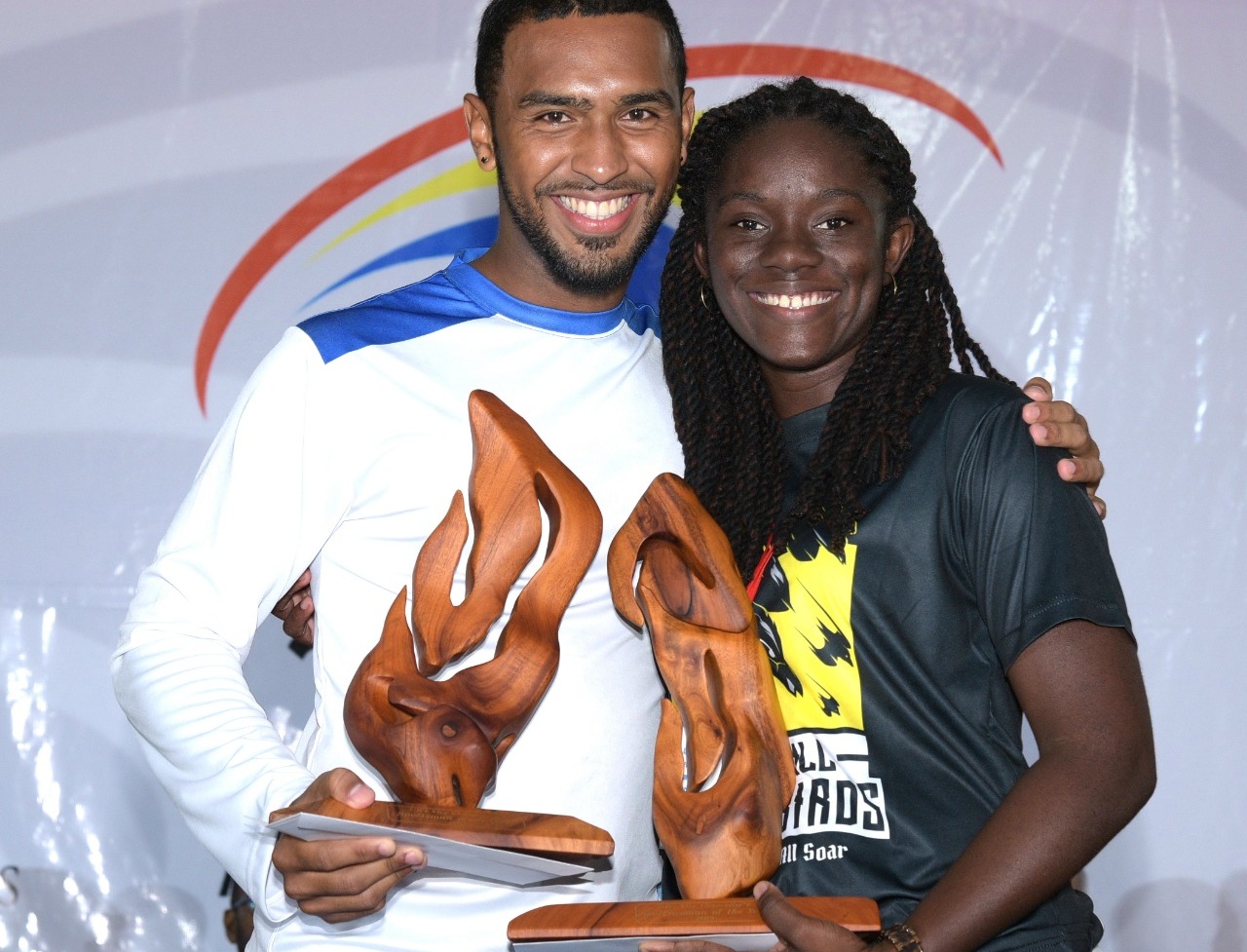 2019 UWI Vice-Chancellor’s Sportswoman and Sportsman of the Year, Vanessa Bobb and Jordan Reynos

Jordan Reynos, a national hockey player from The University of the West Indies St. Augustine has been named Sportsman of the Year. He received the prestigious award at the opening ceremony of the 2019 UWI Games.

He shared the proud moment with Club netball captain, Vanessa Bobb of the Cave Hill Campus who received the Sportswoman of the Year award. Over five hundred student-athletes from across The University of the West Indies gathered at the Mona Campus in Jamaica for the 2019 UWI Games; the ten-day biennial tradition of inter-campus competitive sports, camaraderie and fun kicked off on Thursday, May 23.

In his welcome remarks, Pro Vice-Chancellor and Principal of the Mona Campus, Professor Dale Webber noted, “This is the 31st staging of this, the largest multisport regional event. In fact, we should call it The UWI Olympics.” He added, “Over the last 70 years the University has produced many stalwarts; some of them in academia, some of them in sports. But we put them all together to create the well-rounded individuals you are. Co-curricular activities make it possible for you to achieve all that you need to.”

The UWI Games is one of the major sporting and integration events for the regional University – providing opportunities for students from all four campuses to get together. From May 23 to June 1, various teams will compete in 10 sporting disciplines: basketball, football, tennis, swimming, table tennis, track and field, volleyball, cricket, netball and 6-a-side hockey.

Over the past three years, the opening of the UWI Games and the Vice-Chancellor’s Sportswoman and Sportsman of the Year Awards have been combined into one celebration of The UWI’s sporting excellence. The Awards which were established in 2016, by Vice-Chancellor, Professor Sir Hilary Beckles, honour top student-athletes for their outstanding performance in academics, athletics, service and leadership.

Nominees are registered UWI students, recommended by their coaches and organisations for having excelled at the local and international levels while maintaining an acceptable grade point average. After initial screening by campus selection committees, prospects from each campus are sent forward for further evaluation at the university level, and final selection of the Sportswoman and Sportsman of the year.

The 2019 nominations for Sportswoman award included Vanessa Bobb (Netball) and Cadijah Mars (Football) of the Cave Hill Campus; Maya Roberts (Volleyball) of the St. Augustine Campus; and Staciann Lake (Netball) of the Open Campus. The finalists for the Sportsman award included Kavem Hodge (Cricket) and Brandon Field (Archery) of the Cave Hill Campus; Jean-Paul Drakes (Track) of the Open Campus; Akim Fraser (Cricket) of the Mona Campus; and Amir Jangoo (Cricket) and Jordan Reynos (Hockey) of the St. Augustine Campus.

In presenting the 2019 awardees, Director of Alumni Relations at UWI, Mrs. Celia Davidson-Francis emphasised that “the awards are not just about athletic performance, but the winners also have to be sound academically, demonstrate commitment and integrity, and pay forward and help others through volunteerism and service.”

Sportsman of the Year, Jordon Reynos, who is pursuing a BSc Management Studies degree at St. Augustine, is a regular on the Trinidad and Tobago Senior Hockey Team. He has represented the country in over 30 games. He was a member of an unbeaten team that went on to win gold at the Indoor Pan America Cup in 2017 after a final against Argentina in which Reynos scored three goals. He also contributed to creating history when the team made its first ever world cup win at the FIH Indoor Hockey World Cup in Berlin, Germany in February 2018, beating Kazakhstan and finishing tenth place on the world stage.

Reynos’ desire to help others can be seen through his volunteerism, at institutions such as the St. Mary’s Children Home where he teaches kids hockey. He also helps coach children with special needs at the Ministry of Sport and Youth Affairs Camp for children and adults. His leadership skills both on and off the field are considered major assets to his fellow students as well as the UWI Men's Hockey team and his teammates.  On receiving his award, he expressed his gratitude to the University for providing a forum for athletes to showcase their talents.

Sportswoman of the Year, Vanessa Bobb is a student in the BSc Sports Science degree programme at Cave Hill. She was Captain of the St. Barnabas Netball team which competed in the sport’s top Division in Barbados. As captain, she led her team to victory in the 2018 Barbados Netball Association’s League Competition. She was also selected for the Barbados Senior Netball Team for the 2018 Commonwealth Games. In 2013, 2015 and 2019 respectively, she played at all levels as the captain of the Queens College School Team. In 2010 she was called up to the Under 16 national trials, was named captain of the national team in 2012 – which won many trophies.

In 2014 she toured with the Senior National Netball Team, then went on to the World Cup in August 2014 in Alberta Canada. In 2016 she made the National Under-21 team which was selected for the first-ever Under 21 American Federation of Netball Associations qualifiers.  Bobb also made the team in 2017 which participated in the World Youth Qualifiers in Botswana. In 2018, she made her senior debut for the national team at the 2018 Commonwealth Games in Gold Coast, Australia.

She is currently training with the senior squad for the upcoming Vitality Netball World Cup. She maintains an excellent GPA and is involved in community work through volunteering at the Nightingales Children’s Home where she teaches netball. In her response after receiving her award, Bobb thanked her Sports Science degree classmates as well as her parents for their support.