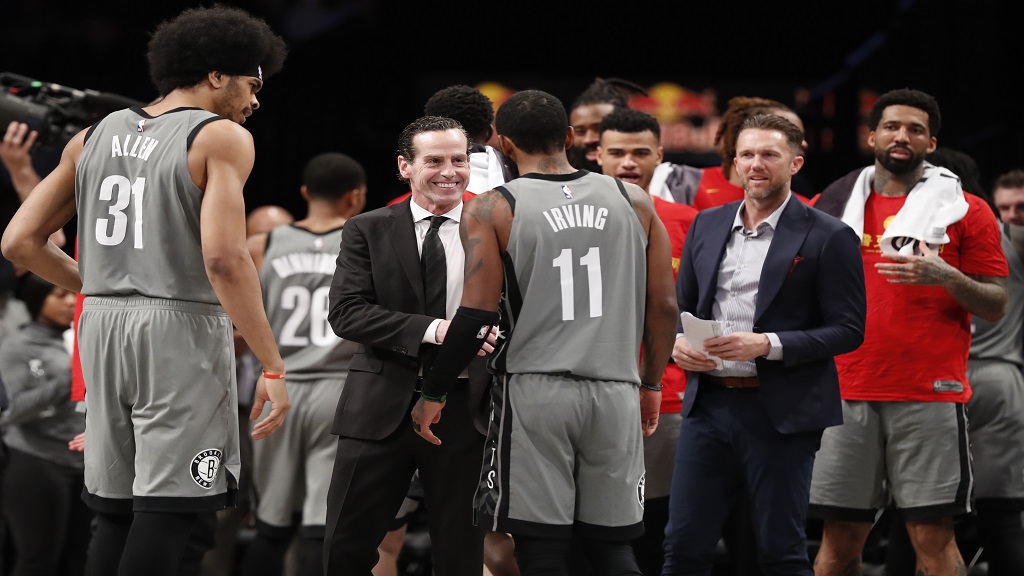 Brooklyn Nets head coach Kenny Atkinson smiles as he talks to Nets guard Kyrie Irving (11) during a timeout in the second half of an NBA basketball game against the Detroit Pistons, Wednesday, Jan. 29, 2020, in New York.

Kyrie Irving returned to the court and helped the Brooklyn Nets to victory on Wednesday, while Damian Lillard continued to press his NBA All-Star claims.

Irving, who skipped Brooklyn's last game, fought back tears as Barclays Center paid a pre-game tribute to Bryant, his 13-year-old daughter Gianna and the other seven victims of Sunday's helicopter crash.

Overlooked for an All-Star starting spot, Lillard boosted his hopes of being named among the reserves with a first career triple-double.

The 29-year-old tallied 36 points, 10 rebounds and 11 assists to take the Portland Trail Blazers to a 125-112 victory over the Houston Rockets, who were led by Russell Westbrook's 39 points and 10 rebounds.

Victor Oladipo put 12 months of injury rehabilitation behind him with a clutch three-pointer as the Indiana Pacers beat the Chicago Bulls 115-106 in overtime. Finally recovered from a ruptured quad tendon, the former number two overall draft pick completed 21 minutes off the bench and hit a long-range shot in the closing seconds to send the game into an extra period.

DeMar DeRozan dropped a season-high 38 points on 11-of-19 shooting to see the San Antonio Spurs to a slump-busting 127-120 win over the Utah Jazz. Utah suffered their second successive loss despite Rudy Gobert's double-double and 31 points from Donovan Mitchell.

Dillon Brooks had 27 points and Jonas Valanciunas a double-double as the Memphis Grizzlies extended their winning streak to four games, defeating the New York Knicks 127-106.

After hitting 50 points two days earlier, Eric Gordon came crashing back to reality in Portland. The 31-year-old guard went two-of-10 from the floor for eight points against the Trail Blazers, making just one of his eight three-point attempts.

The Jazz (32-15) are back on the road on Thursday with a big Western Conference clash against the Denver Nuggets (32-15), who will be looking to rebound from their recent loss to the Grizzlies.