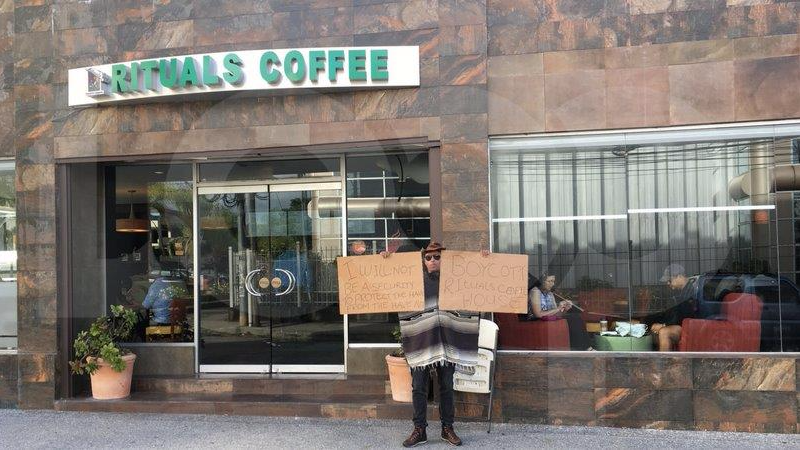 Ian Smart, director of Smart Energy demonstrated in front of a Rituals restaurant, protesting what he says is control by 'the one percent'.

Speaking to LoopTT, Smart says he believes that government is not doing its part to incorporate renewable energy into its policies, and blames large local corporations.

He is also protesting against statements made by Rituals CEO Mario Sabga-Aboud who claimed that the Syrian-Lebanese community is the 'most powerful'.

"My demonstration is about statements made by Mario Sabga on Anthony Bourdain's Parts Unknown, where he stated that the Syrian community is the most powerful community in Trinidad and Tobago, and that middle classes are there just to provide a security between the 'haves' and the 'have nots'."

"This is the thinking of the one percent, and this is the problem, we have high income inequality in Trinidad and Tobago which is driving crime and all sorts of economic and social ills."

"It's the one percent that is locking up people for marijuana joints while they're bringing in cocaine and doing massive money laundering, they call themselves businessmen...I'm here to start a rebellion," he said. 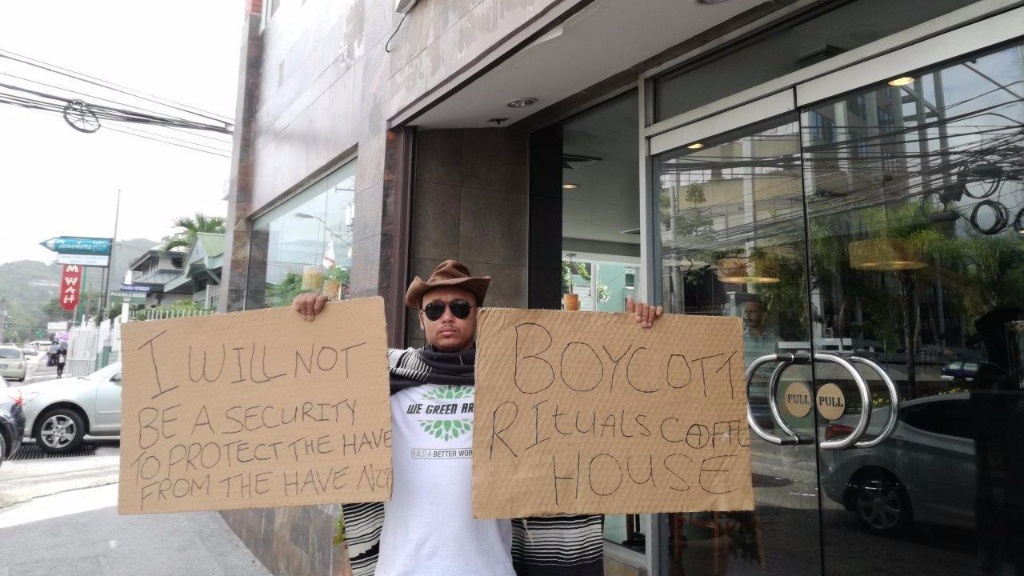 (Photo: Ian Smart holds up placards outside of Rituals, Port of Spain)

Smart says he has launched a green party called 'We Green Army' to help the country become a green economy.

He says his party will focus on renewables and diversification, including decriminalising medical marijuana.

He also thanked Bourdain for doing the segment and bringing light to these issues as well as Van Jones who started the Green for All campaign in the US.

Some Trinbagonians objected to comments made by Sabga-Aboud during chef Anthony Bourdain's visit to Trinidad and Tobago for CNN's Parts Unknown, in which he claimed that the Syrian-Lebanese community, although the smallest, is the most powerful.

Another family member said that the middle class, which provides a buffer between the "haves and have nots" is dwindling, and that people are getting angry.

“At one time we used to have a huge middle class which was a security in terms of any possible conflict between the “haves” and the “have nots”. But now that’s eroding and they’re getting poorer so they’re starting to get angry," he said.

In response to Bourdain’s question as to the biggest threat, the response was “civil commotion”.

“We have a crime problem related to gangs, gang warfare,” he said.

See the shortened, edited video below:

For more information go to: https://www.ttsmartenergy.com/we-green-army