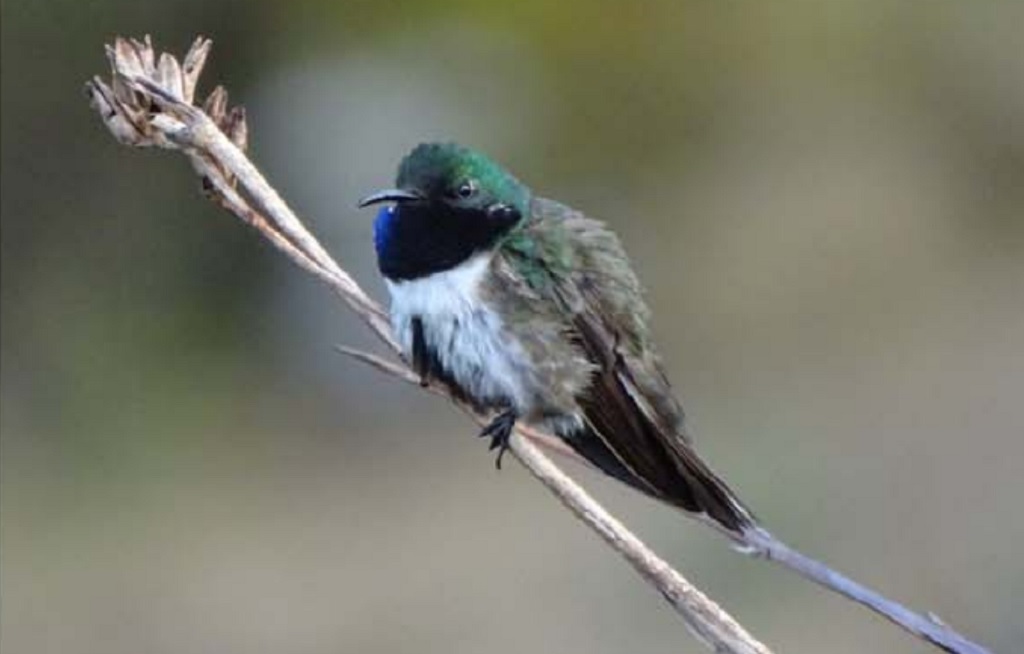 Photo: The Blue-throated Hillstar was discovered in 2017 and is listed as critically endangered. Photo courtesy the American Ornithological Society.

A newly discovered hummingbird species in Ecuador is already critically endangered, according to researchers.

According to a report by the American Ornithological Society, the newly discovered species is in danger of going extinct due to threats to its habitat.

Researchers conducting work in the Ecuadorian Andes in 2017 said the small, brilliantly blue-coloured hummingbirds, known as the Blue-throated Hillstar, is rare in that it lives at high elevations and has specially adapted to cold temperatures.

The researchers estimated that at the time of their study there were at most 750 birds and maybe less than 500, as the area was subject to bushfires, grazing and gold mining.

“The fate of O. cyanolaemus is likely critical, with no land protection and no conservation measures known to us. Even though population numbers are not known, we suggest a very small population (at best, 250–750 individuals, but possibly below 500 individuals) inferred from numbers of male birds and territorial females observed in the field, and limited suitable feeding and nesting habitat along a small range (Pearson 1953, Carpenter 1976).”

“Following IUCN (International Union for Conservation of Nature) criteria for conservation status assessments (UICN 2012), we evaluate O. cyanolaemus as Critically Endangered (CR) given that its actual extent of occurrence is likely below the 100 km2 threshold…”

“No conservation measures have been taken to date, but a nature tourism initiative is currently underway at Cerro de Arcos, managed by the local community of Sabadel, and a conservation action plan is currently being designed,” the study said.

There are over 300 species of hummingbird known to science, all of which exist within the Western Hemisphere, and most of which live in the tropical forests of Central and South America.

Hummingbirds are small birds known for being able to hover in mid-air by rapidly flapping their wings. They are the only birds that can actually fly backwards.

In Trinidad and Tobago, there have been sightings of approximately 19 different hummingbird species.

Hummingbirds have the greatest mass-specific metabolic rate of any homeothermic animal. To conserve energy when food is scarce, and nightly when not foraging, they can go into torpor, a state similar to hibernation, slowing metabolic rate to 1/15th of its normal rate.

Watch: State of emergency in Ecuador due to influx of Venezuelans