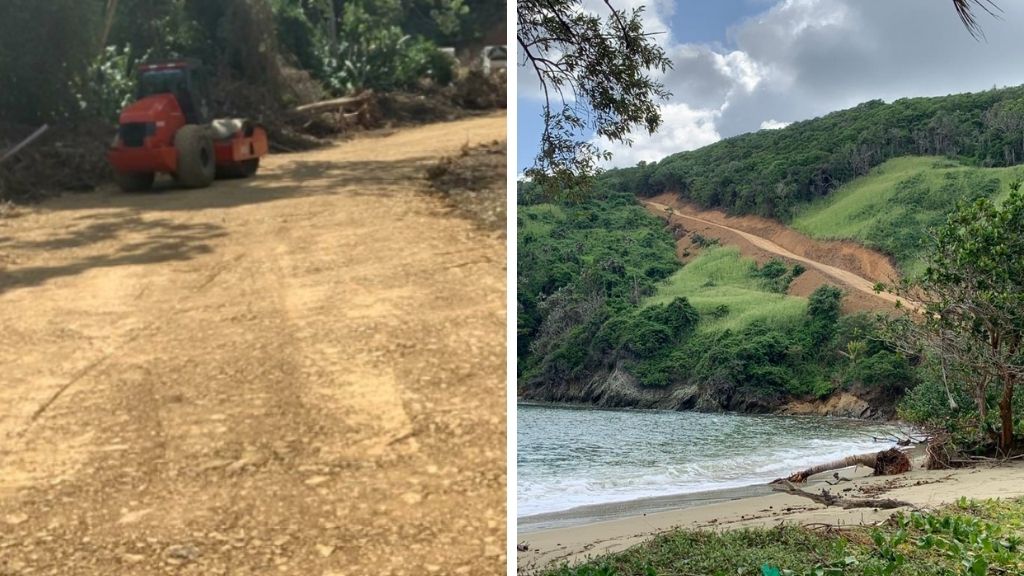 Photos: A clearing for a roadway was seen by people visiting the area in recent days. Environment Tobago has called for an investigation into the incident; the group said it was told no Certificate of Environmental Clearance was issued for a road in that area. Photos: Lystra Burkhart.

The Environmental Management Authority (EMA) said in a statement Wednesday that it had received reports of the clearing, which is being investigated:

'The Environmental Management Authority (EMA) can confirm the receipt of reports from concerned persons on the clearing of land in Starwood, Tobago.'

The EMA told Loop News it carried out a site visit to the area on September 25 as part of its investigation and has written to  the Division of Agriculture, Food Production and Fisheries, Tobago House of Assembly to  collate further information on the activity.

The EMA said its investigations are ongoing.

Conservation group Environment Tobago is asking for an investigation into a roadway which was cleared in a forested area in northeast Tobago.

The group shared photos of the clearing taken by people who visited the area in Starwood recently. The group said the clearing is not visible from the main road.

Vice president Patricia Turpin told Loop News that the clearing could have disastrous effects on the environment.

She said she spoke to a representative at the Environmental Management Authority (EMA) in Tobago, and was told that no Certificate of Environmental Clearance (CEC) had been given for the construction of a road in that area.

Loop News has reached out to the EMA for further information.

Turpin said the runoff from this clearing could damage Tobago’s coral reefs and the waters near Little Tobago.

‘This is urgent, heavy rain will cause runoff into the sea right near to the Little Tobago area where all the reefs are, near to Goat Island.’

‘During heavy rainfall the runoff from that clearing into pristine area is going to be terrible. That whole north area is about to be declared a protected area.’

Turpin said she was given unconfirmed information that the road was intended to be a farming road, however she has asked in light of this why would a double lane road be constructed. Additionally she said there was no farmland in the area.

She also referred to other reports of poaching and illegal development being done during the COVID-19 restrictions.

‘All sorts of poaching is going on; we put out a notice with other groups begging people to stop the illegal hunting. We’re aware that there are a limited number of wardens and during the lockdown we’re not sure if they are active.’

Under the EMA, the Environmental Police Unit (EPU), which comprises Special Reserve Police Officers has been assigned to assist with the prosecution of offences under the Environmental Management Act, Chapter 35:05 as well as its subsidiary legislation.

Turpin said the clearing appeared to have been done during the lockdown on purpose.

‘It seems like they didn’t want people seeing the equipment and work going on.’

A representative from the forestry division at the Tobago House of Assembly said that any roadway longer than a kilometre in Tobago requires a CEC.

The source said further, due to Starwood’s location and possible environmental impacts, an Environmental Impact Assessment (EIA) might also be required.

If those applications were required and not made, the development could be considered unlawful.

Starwood Bay is located near Speyside, one of the Caribbean’s top diving sites.

Government proposed that the waters of northeast Tobago be declared a Marine Protected Area (MPA). The area would be one of 136 Protected Areas across Trinidad and Tobago.

In separate incidents, reports have also been made of illegal developments during the lockdown in Trinidad.

EMA pleads with public to report poaching of protected species