Photo courtesy the Ministry of Rural Development and Local Government.

The Guanapo landfill has been re-opened after a fire which caused smoky conditions in the surrounding areas.

SWMCOL, which manages the site, said in a statement issued Monday that the site was re-opened to the public.

The company said although the landfill was re-opened there were still minimal effects of the fire and residents in surrounding areas are advised to exercise caution.

The company apologised for the inconvenience caused.

The Arima Borough Council warned citizens to be on the alert for health complications after a fire at the Guanapo Landfill lead to a profusion of smoke in the area.

Corporate Secretary for conservation group Fishermen and Friends of the Sea, Gary Aboud, said the smoke presents a health risk.

He shared video of the landfill on Wednesday via social media and called on the authorities to stop the spread of such toxic material.

"There's been a problem here because leaching from this dump has gotten into the water table. There are serious concerns...now we have airborne contaminants.

"It's breathing onto people. This is not healthy," he said.

The Ministry of Rural Development and Local Government said in a social media update on Thursday that Arima Borough Corporation's Disaster Management Unit liaised with SWMCOL and confirmed that the fire was contained.

However, the Ministry said smoke was still being generated up to Thursday afternoon.

The Ministry said residents reported decreased visibility in some areas as well as the distinct smell of smoke in areas where the smoke was not visible.

The Ministry said several people also indicated that the conditions resulted in irritation to eyes and throats. It added that some schools in affected areas, including Holy Cross College, had suspended classes for the day. 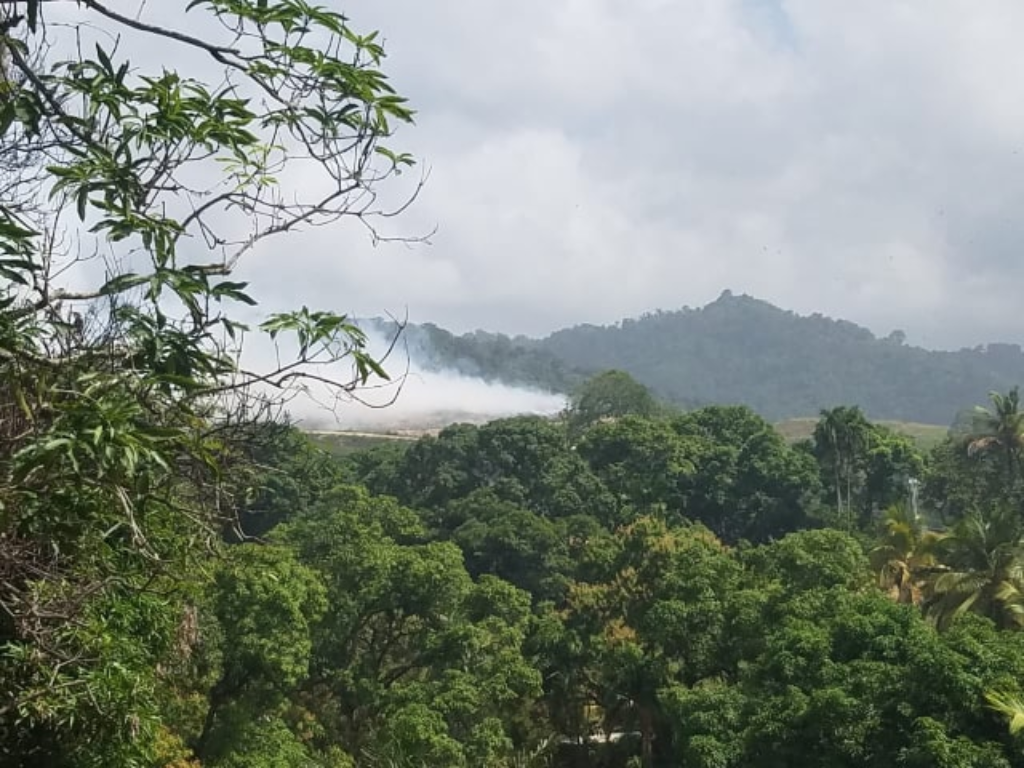 (Photo courtesy the Ministry of Rural Development and Local Government)

In a statement issued Thursday, Arima MP Anthony Garcia said that efforts were made to extinguish the fire as soon as possible and the site remains closed at the moment.

"Member of Parliament for Arima, Anthony Garcia is assuring constituents residing near the Guanapo Land Fill that everything is being done to extinguish the fire at the site as quickly as possible."

Garcia said his office had been liaising with SWMCOL and the fire service to deal with the fire since Wednesday.

He said the surface firre was extinguished on Wednesday, however, due to the accumulation of gasses, there is an underground fire which would be brought under control soon.

He said that health facilities in the area were on standby to treat any residents affected by the smoke.

He said the Guanapo Landfill Site remained closed to the public on Thursday and users were advised to use the Beetham or Forres Park Landfill sites temporarily.

Residents told to stay away from smoke

In a statement Thursday, the Arima Borough Council warned people to stay indoors away from the fumes and to contact the Emergency Department at the hospital if they became ill.

"It has come to our attention that there is smoke emanating from the Guanapo Landfill and due to the wind direction, much of our beloved Borough is covered by smoke."

"We wish to take this time to offer some safety tips.

"1. Please stay out of the smoke if possible. Do not attempt to go see what is taking place.

"2. If at home, remain indoors and close all doors and windows.

"3. Persons who are asthmatic or have other respiratory illnesses, please be very cautious and utilise your inhalers. If conditions worsen, do not hesitate to visit the Emergency Department."

"4. Remember that children, the elderly and persons with Respiratory Illnesses are more likely to be affected by the smoke," the statement said.

Citizens who experience health issues associated with the smoke are urged to contact the nearest health facility.

Teenager in critical condition after being set on fire in Tobago