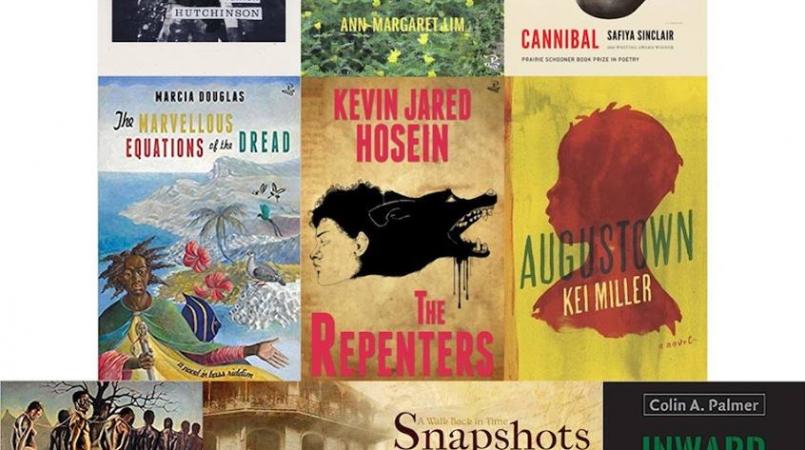 Now in its seventh year, the Prize recognises books in three genre categories — poetry, fiction, and literary non-fiction — published by Caribbean authors in 2016.

In the poetry category, the judges have named books by three younger Jamaican writers. Ishion Hutchinson’s House of Lords and Commons is a meditation on home and abroad, personal and communal history, with a rich verbal register and intense engagement with the past literary canon. Ann-Margaret Lim’s lyrical Kingston Buttercup has a deep grounding in the landscape of Jamaica, whether the penetrating poems address the persistent legacy of slavery, Lim’s relationship with her mother, or the complications of contemporary Kingston. And Safiya Sinclair’s debut Cannibal is haunted by the character of Caliban from The Tempest, as it explores Jamaican childhood and womanhood, and otherness in a strange place that may be the United States where the poet now lives, or language itself. “We were delighted to read a set of poetry collections remarkable for their range of focus and poetic method,” write the prize judges. “Each entry made its own claims on us in terms of originality, appeal, and ambition. Throughout our discussions, all the collections impressed upon us the vitality of today’s voices in contemporary Caribbean poetry.”

The fiction category includes novels by two Jamaicans and one Trinidadian. Marcia Douglas’s magical realist novel The Marvellous Equations of the Dread is set at one of the bleakest moments of Jamaica’s recent history, after the deaths of Bob Marley and Emperor Haile Selassie, and conveys a sense of both history’s dread and the hope born of human creativity. In his debut novel The Repenters, Kevin Jared Hosein tells a transgressive, almost gothic tale of violence and punishment, exploring the darkest side of Trinidadian society and family history. And in Augustown, Kei Miller offers a historical epic ranging over sixty years of Jamaican history, with its complexities of class, ethnicity, religion, and language. “Due to the excellence and range of so many of the works, selecting a shortlist was extremely difficult,” remark the fiction judges. “We were impressed by the high quality of the entries drawn from a range of new and established writers across the region and beyond. The immediacy of their respective concerns for their culture and their pride in the richness of its history are obvious. They’re digging deep.”

The final longlisted books, in the non-fiction category, are all historical studies. Barbadian Hilary McD. Beckles’s The First Black Slave Society: Britain’s “Barbarity Time” in Barbados, 1636–1876 is a compelling history of the first 140 years of the colonisation of Barbados, “with great resonances for contemporary debates about reparatory justice for the crimes of history,” say the judges. Angelo Bissessarsingh’s twin books Virtual Glimpses into the Past and A Walk Back in Time, considered by the judges as two volumes of a single work, collect vignettes from the history of Trinidad and Tobago, offering an effortless read for those for whom the past is a forgotten country. Bissessarsingh, a self-taught historian who passed away in early 2017, during the judging period, won a devoted following among Trinidadian readers for his enthusiastic style and passion for research. And in Inward Yearnings: Jamaica’s Journey to Nationhood, Colin Palmer tells the story of Jamaica’s struggle to define an identity that embraces both its African heritage and its Anglophone western past. “Palmer’s prose immediately immerses you in sympathy for the people, events, and organisations that make this history,” the judges note.

The winners in each genre category will be announced on March 27 and the Prize of US$10,000 will be presented to the overall winner on Saturday, April 29 during the seventh annual NGC Bocas Lit Fest in Port-of-Spain.

The overall chair of the 2017 cross-judging panel is the eminent Jamaican poet and scholar Edward Baugh.