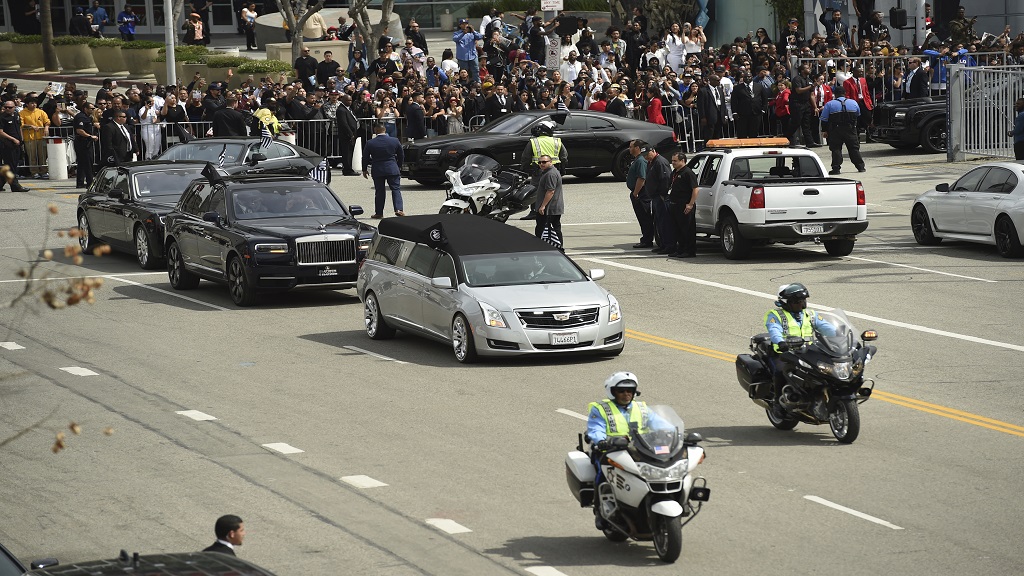 A silver hearse carrying the body of Nipsey Hussle, whose given name was Ermias Asghedom, leaves Staples Center in a procession following the Celebration of Life memorial service for the late rapper on Thursday, April 11, 2019, at the Staples Center in Los Angeles. (Photo by Chris Pizzello/Invision/AP)

Nipsey Hussle's legacy as a persistent rapper, community activist, uniter, a doting father, a protective sibling and a loving son were underscored at his public memorial service on Thursday, with deeply personal testimonies from those closest to the rapper, including his actress-fiancee Lauren London, collaborator and dear friend Snoop Dogg and his mother, who said she was at peace with the death of her "superhero" son.

Beyonce and Jay-Z were among the big-name celebrities who attended the three-hour event in Los Angeles at the Staples Center, where the last celebrity funeral held at the concert arena was Michael Jackson's in 2009.

The arena was packed with more than 21,000 fans and drove home the important impact Hussle — just 33 when he died — had on his city and the rest of the world.

"I'm very proud of my son. My son Ermias Joseph Asghedom was a great man," said Angelique Smith, dressed in all white. Standing onstage with Hussle's father, Dawit Asghedom, she declared: "Ermias was a legacy." 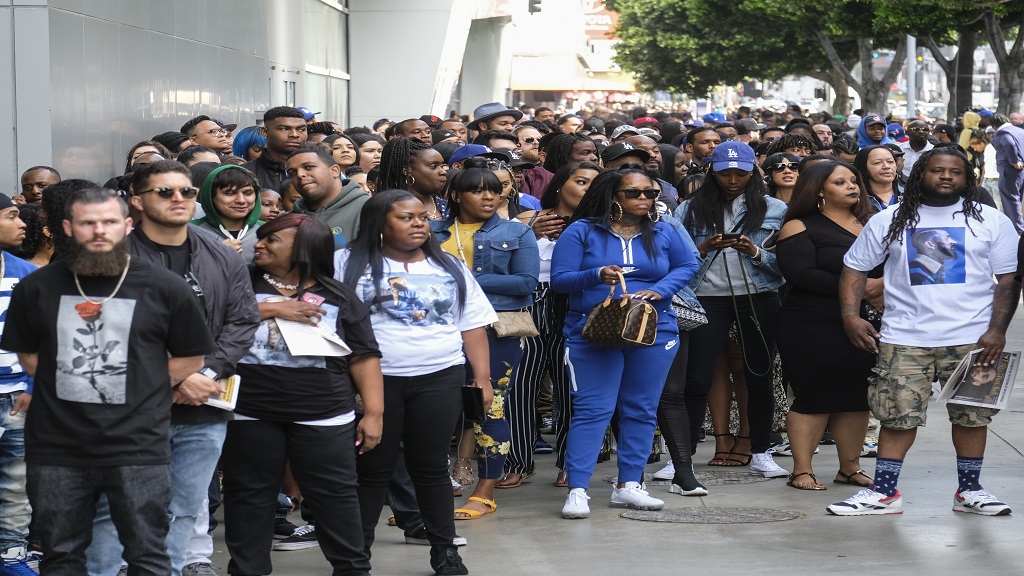 London, who was in dark sunglasses, was emotional but stood strong onstage as she told the audience: "I've never felt this type of pain before."

London called Hussle "majestic" and "brilliant" and said she had learned so much from his presence. She added though she was hurting, she was really sad for their son Kross, whom she feared wouldn't remember his dad: "My pain is for my two-year-old."

Snoop Dogg's words to immortalize his friend were both serious and silly, as he told old stories about Hussle and their brotherhood.

"This a tough one right here," he said, visibly shaken but keeping his composure.

Snoop thanked Hussle's parents multiple times and told his father that "you picked up another son in me." 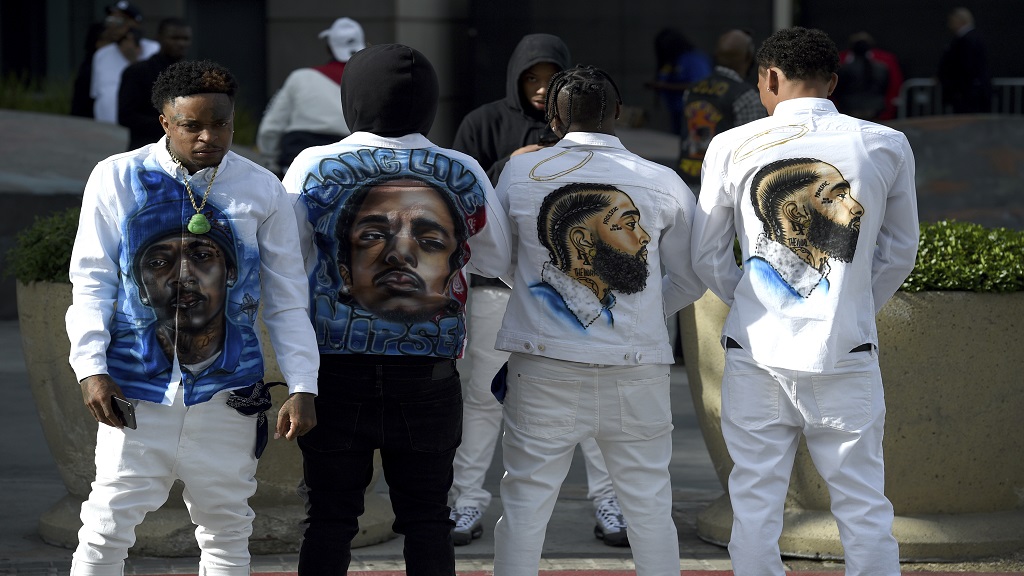 Hussle's father said he knew his son was strong because when he was born, the umbilical cord was wrapped around his neck but he prevailed.

Earlier in the ceremony, Hussle's children also appeared onstage to pay tribute. London's son with rapper Lil Wayne, Cameron Carter, said days after Hussle died, he had a dream he saw the rapper.

"I realized Ermias told me what heaven was like. He told me it was paradise," Cameron said.

Cameron then told the audience that Hussle would look at him through the window at times and say "respect." Cameron then asked the crowd to say "respect" in unison, and they complied.

Hussle was slain last month in front of a store that he tried to use to empower his South Central neighborhood. The public memorial service kicked off by paying respect to Hussle the rapper, as songs from his latest Grammy-nominated album, "Victory Lap," filled the arena. 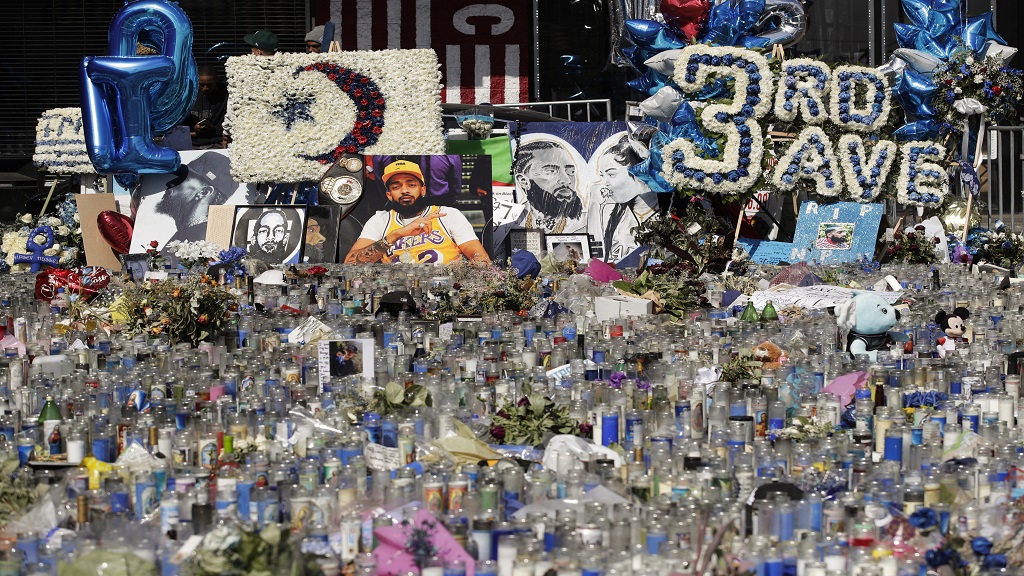 "Everybody put your hands in the air," the DJ said as one of Hussle's songs played. "It's a celebration."

Indeed, his mother danced in the aisle as R&B singer Marsha Ambrosius sang the Mariah Carey song "Fly Like a Bird" while fighting back tears. "This is for Nipsey y'all," Ambrosius said before she started as she tried to gain her composure, sighing heavily.

But soon the focus was squarely on the person behind the persona. A montage of photos featuring the rapper from infancy, childhood and adulthood, with fellow rappers, his family and London, were shown to the crowd, set to Frank Sinatra's "My Way."

Stevie Wonder was the last performer to pay tribute to Hussle, who he said he had the chance to meet, saying: "We had a good conversation." Before he sang his song "Rocket Song," one of Hussle's favorites, Wonder denounced gun violence and told the audience "there's enough people being killed by guns and violence."

Anthony Hamilton invoked the spirit of a church service when he performed in Hussle's honor. Nation of Islam leader Louis Farrakhan hailed Hussle's ability to bring different factions together. And blogger and media figure Karen Civil read a letter sent by former US President Barack Obama.

"I've never met Nipsey, but I've heard his music through my daughters, and after his passing I had the chance to learn more about his transformation and his community work. While most folks look at the Crenshaw neighborhood where he grew up and only see gangs, bullets and despair, Nipsey saw potential. He saw hope. He saw a community that even through its flaws taught him to always keep going. He choice to invest in that community rather than to ignore it," the Obama letter read. "He set an example for young people to follow and is a legacy worth of celebration. I hope his memory inspires more good work in Crenshaw and communities like it. Michelle and I send our sympathies to Lauren, Emani, Kross and his while family and to all those who love Nipsey."

Father Thomas Uwal read a scripture in Tigrinya — the native language in Eritrea, the African country where Hussle's father was from. Father Uwal spoke of Hussle being a "proud to be an Eritrean-American," later saying to the late rapper's family: "On behalf of all Eritreans ... we say our condolences to you."

Books with an image of Hussle on the cover were handed out to service attendees. The book of nearly 100 pages contained numerous photos of Hussle with London, his children, and friends like Russell Westbrook and Snoop Dogg. It also had heartfelt messages from Rick Ross, The Game and LeBron James.

"I've never cried myself to sleep over any public figure before, but Nipsey's presence meant so much for our community," actress Issa Rae said in her message inside the book.

The hearse carrying Hussle's coffin was scheduled to after the funeral to go on a 25-mile lap through the city, including past the property where Hussle had planned to turn an aging strip mall into new businesses and affordable homes. Finally, it will arrive at a funeral home in the city's hard-scrabble Crenshaw district, where the rapper was born on Aug. 15, 1985.

Hussle was shot to death March 31 while standing outside The Marathon, his South Los Angeles clothing store, not far from where the rapper grew up.

Eric R. Holder Jr., who has been charged with killing Hussle, has pleaded not guilty. Police have said Holder and Hussle had several interactions the day of the shooting and have described it as being the result of a personal dispute.

For a decade, Hussle released much sought-after mixtapes that he sold out of the trunk of his car, helping him create a buzz and gain respect from rap purists and his peers. His said his stage name, a play on the 1960s and '70s rhyming standup comic Nipsey Russell, was given to him as a teen by an older friend because he was such a go-getter — always hustling.

Last year he hit new heights with "Victory Lap," his critically acclaimed major-label debut album on Atlantic Records that made several critics' best-of lists. The album debuted at No. 4 on Billboard's 200 albums charts and earned him a Grammy nomination.

But the rapper was also a beloved figure for his philanthropic work that went well beyond the usual celebrity "giving back" ethos. Following his death, political and community leaders were as quick and effusive in their praise as his fellow hip-hop artists.

Hussle recently purchased the strip mall where The Marathon is located and planned to redevelop it, part of Hussle's broader ambitions to remake the neighborhood where he grew up and attempt to break the cycle of gang life that lured him in when he was younger.

His family and friends vowed to continue his work, and London told the crowd: "The marathon continues!"