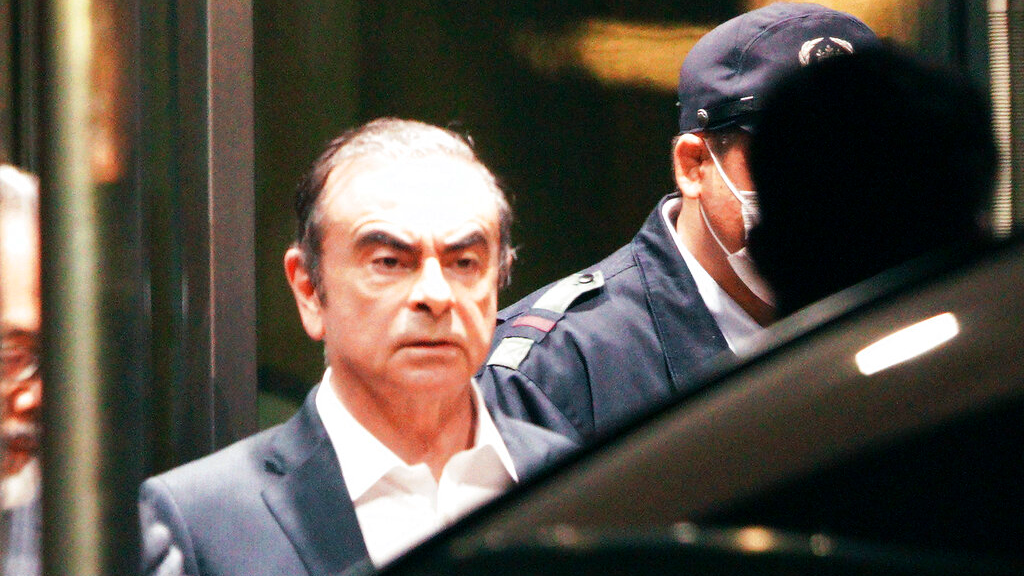 Former Nissan Chairman Carlos Ghosn leaves the Tokyo Detention Center, in Tokyo Thursday, April 25, 2019. Ghosn walked out of detention Thursday evening, his head held high, after a Japanese court rejected an appeal from prosecutors and his 500 million yen ($4.5 million) in bail was paid earlier in the day. (AP Photo/Eugene Hoshiko)

Former Nissan Chairman Carlos Ghosn walked out of a Japanese detention center Thursday evening, his head held high, after paying 500 million yen ($4.5 million) in bail and winning a court rejection of an appeal from prosecutors.

Ghosn walked solemnly out of the Tokyo Detention House with one of his lawyers by his side. They got into a dark van without speaking and drove off, watched by dozens of journalists who had been waiting for his release for hours.

Prosecutors had fought to keep him in custody, contending he could tamper with evidence or influence witnesses. But the Tokyo District Court decided in the evening he should be released.

In a new twist, the court also decided to restrict Ghosn's contact with his wife, Carole Ghosn, targeting her as someone related to the latest allegations, according to his legal team.

In a statement issued shortly after his release, Ghosn said the new bail conditions were "cruel and unnecessary."

Ghosn was arrested in November, released on bail in early March, but re-arrested and detained again April 4 on new allegations.

The latest bail comes on top of the 1 billion yen ($9 million) Ghosn posted for his earlier release.

He has been charged with under-reporting his post-retirement compensation and breach of trust in diverting Nissan money and allegedly having it shoulder his personal investment losses.

Ghosn's lawyer, Junichiro Hironaka, said the bail conditions require advance notice of contacts between Ghosn and Carole Ghosn. They will not be able to live together and a lawyer must be present when they meet.

Carole Ghosn is not a suspect, and she had been looking forward to being with her husband. She is mentioned in the latest allegations that center around payments by an Oman business to operations allegedly run by Ghosn, which reportedly have some links to his wife's business. She was called in for questioning earlier this month.

"We love each other very much, she answered all of the prosecutors' questions in court, and she has done nothing wrong," Carlos Ghosn said in the statement.

Carole Ghosn, who has said both her husband and she are innocent, has been a vocal proponent, appealing to public opinion and human rights groups about Ghosn's treatment.

Hironaka said he had expected the restrictions because bail conditions generally prohibit contact with people linked to the case. He said the legal team will work to moderate the restrictions.

Ghosn, 65, a Brazilian-born Frenchman of Lebanese ancestry, contends the compensation he allegedly underreported was never decided on or paid and the payments were for legitimate services.

"I maintain my innocence and am committed to vigorously defending myself against these meritless and unsubstantiated accusations. I hope to be given a fair trial where the truth will come to light and I will be fully vindicated," he said in the statement.

For his earlier release, his defense team offered special conditions such as installing a surveillance camera at the entrance to a specified residence for the former star executive and promising to use a cellphone and the internet only under certain conditions. The latest release requires similar restrictions, including not leaving the country, according to the court.

The lawyer who was with Ghosn when he was released, Takashi Takano, has denied Japanese media reports that Carole Ghosn had contacted people related to the allegations and stressed Ghosn's entire family has been abiding by the terms of his bail agreement.

"If they had done such a thing, the release on bail would end, and they would lose bail money," he said in a recent blog post.

Japanese social media and mainstream media had been buzzing with speculation over how Ghosn would appear when he left detention.

When he was released on March 4 after more than 100 days in detention, he wore a cap, mask and what appeared to be a construction worker's outfit. Ghosn was still easily recognizable, and the "disguise" provoked widespread amusement and commentary.

Ghosn's case has reignited criticism, both internally and internationally, against lengthy detentions without a trial or conviction in Japan, which critics call "hostage justice." Although prolonged detentions are routine in Japan, rearresting a person who has cleared bail is unusual.

But legal experts say Ghosn's release is unusual in coming so soon after being charged. Some have expressed hopes that Ghosn's case will help to gradually change the system.

Ghosn led Nissan Motor Co. for two decades and was credited with steering the success of the global alliance with Renault SA of France and smaller Japanese automaker Mitsubishi Motors Corp.

His departure has raised concern over a potential leadership vacuum at Nissan, which he dominated until his arrest, and about the future of its alliance with Renault and Mitsubishi.

In a video statement released April 9, Ghosn said a few Nissan executives had plotted against him in "a conspiracy."

A date for Ghosn's trial has not been set. In Japan, trial preparations tend to take months. Both sides have said that the case is complex. The allegations against him involve payments to a Saudi dealership, as well as the funds paid to an Oman business.

Nissan ex-chair Ghosn steps out in Tokyo, trailed by media