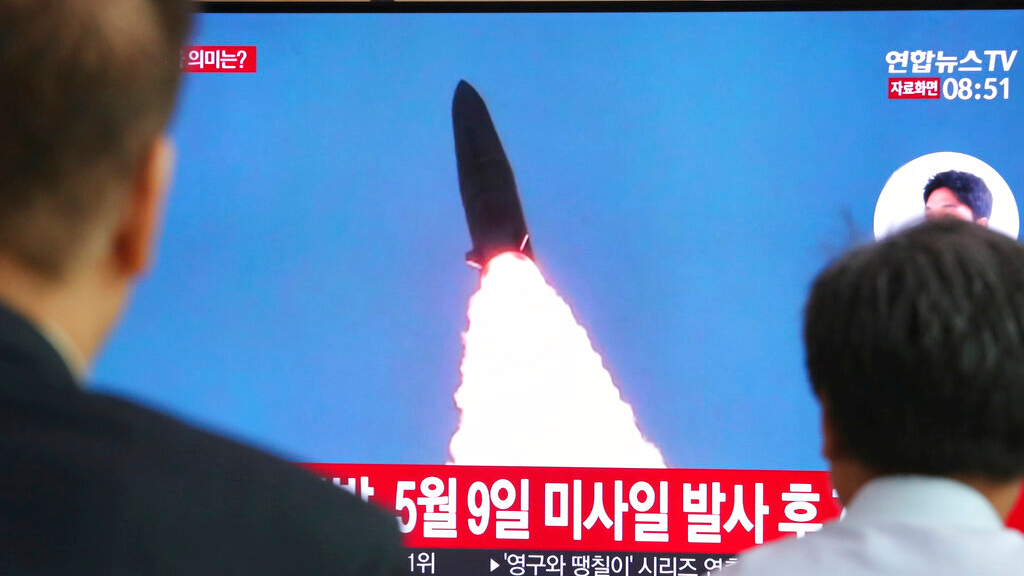 North Korea fired a new type of short-range ballistic missile in two launches into the sea Thursday, South Korean officials said, in its first weapons launches in more than two months and an apparent effort to pressure Washington as Pyongyang and Washington struggle to restart nuclear negotiations.

The South's Joint Chiefs of Staff said the missiles were fired from near the eastern coastal town of Wonsan and flew about 430 kilometers (270 miles) and 690 kilometers (430 miles) respectively before landing off the country's east coast.

The Joint Chiefs of Staff described both missiles as short-range but didn't elaborate. But after a national security council meeting later Thursday, South Korea's presidential Blue House said the weapons North Korea launched were assessed as "a new kind of short-range ballistic missiles."

North Korea is banned by U.N. Security Council resolutions from engaging in any launch using ballistic technology. So North Korea could face international condemnation over the latest launches. But it's still unlikely for the North, already under 11 rounds of U.N. sanctions, to be hit with fresh punitive measures because the U.N. council has typically imposed new sanctions only when the North conducted long-range ballistic launches, not short-range ballistic launches.

A South Korean defense official, requesting anonymity because of department rules, said that an initial analysis showed both missiles were fired from mobile launchers and flew at a maximum altitude of 50 kilometers (30 miles).

The North is unhappy over planned U.S.-South Korean military drills that it says are preparation for an invasion. The missile tests may be meant as a warning to Washington.

They came as many in the United States were focused on testimony before Congress by Robert Mueller, the former special counsel, about his two-year probe into Russian election interference. A day earlier, U.S. national security adviser John Bolton left Seoul after agreeing with South Korean officials to work closely to achieve North Korea's denuclearization.

"North Korea appears to be thinking its diplomacy with the U.S. isn't proceeding in a way that they want. So they've fired missiles to get the table to turn in their favor," said analyst Kim Dae-young at the Korea Research Institute for National Strategy.

But North Korea doesn't appear to be pulling away from U.S.-led diplomacy aimed at curbing its nuclear program, analysts say. The relatively short distance travelled by the missiles suggests the launches were not intended as a major provocation, unlike a test of a long-range missile capable of reaching the U.S. mainland.

North Korea has been urging the U.S. and South Korea to scrap their summertime military drills. Last week, the North said it may lift its 20-month suspension of nuclear and long-range missile tests in response to the drills. Seoul said Wednesday North Korea was refusing to accept its offer to send 50,000 tons of rice through an international agency to protest the drills.

Some experts say North Korea is trying to get an upper hand ahead of a possible resumption of talks. Pyongyang wants widespread sanctions relief so it can revive its dilapidated economy. U.S. officials demand North Korea first take significant steps toward disarmament before they will relinquish the leverage provided by the sanctions.

A senior U.S. official said the Trump administration was aware of the reported launches. The official, who spoke on condition of anonymity to provide a response, said the administration had no further comment.

South Korean Defense Ministry spokeswoman Choi Hyunsoo urged Pyongyang to stop acts that are "not helpful to efforts to ease military tensions on the Korean Peninsula."

"If they were ballistic missiles, they violate the U.N. resolutions, and I find it extremely regrettable," Japan's Defense Minister Takeshi Iwaya told reporters in Tokyo.

China, the North's last major ally and biggest aid provider, said both Washington and Pyongyang should restart their nuclear diplomacy as soon as possible.

"All parties concerned should cherish the hard-won opportunity for dialogue and the easing of tensions, express goodwill, meet each other halfway and jointly make positive efforts to promote denuclearization," said Chinese Foreign Ministry spokeswoman Hua Chunying.

It was the first missile launch since Seoul said North Korea fired three short-range missiles off its east coast in early May. At the time, many experts said those missiles strongly resembled the Russian-designed Iskander, a short-range, nuclear-capable ballistic missile that has been in the Russian arsenal for more than a decade.

Analyst Kim Dong-yub at Seoul's Institute for Far Eastern Studies said the latest missiles could be Scud-C ballistic missiles or KN-23 surface-to-surface missiles, a North Korean version of the Iskander.

During a third summit at the Korean border late last month, President Donald Trump and North Korean leader Kim Jong Un agreed to resume nuclear negotiations that had been deadlocked since their second summit in Vietnam in February. It ended in disagreement over U.S.-led sanctions.

After analyzing North Korea-dispatched photos of the submarine, experts said it likely has three or more launch tubes for missiles. South Korean government documents say North Korea has about 70 submarines. Most have only torpedo, not missile launch tubes, except for a test platform with a single launch tube the North has used when it fired ballistic missiles in recent years, according to Kim Dae-young, the analyst.

The new submarine suggests North Korea has been increasing its military capability despite nuclear diplomacy that it began with the United States early last year.

The latest launches came amid a flaring of tensions in North Asia after South Korean fighter jets on Tuesday fired warning shots to drive away a Russian reconnaissance plane that Seoul says violated its airspace. Before that alleged intrusion, South Korean military jets scrambled after Russian and Chinese warplanes including the reconnaissance aircraft made an extremely unusual joint entrance into South Korea's air defense identification zone.

Putin: NKorea ready to denuclearize - if it gets guarantees

US, South Korea end spring military drills to back diplomacy