No hiccups in SEA exam 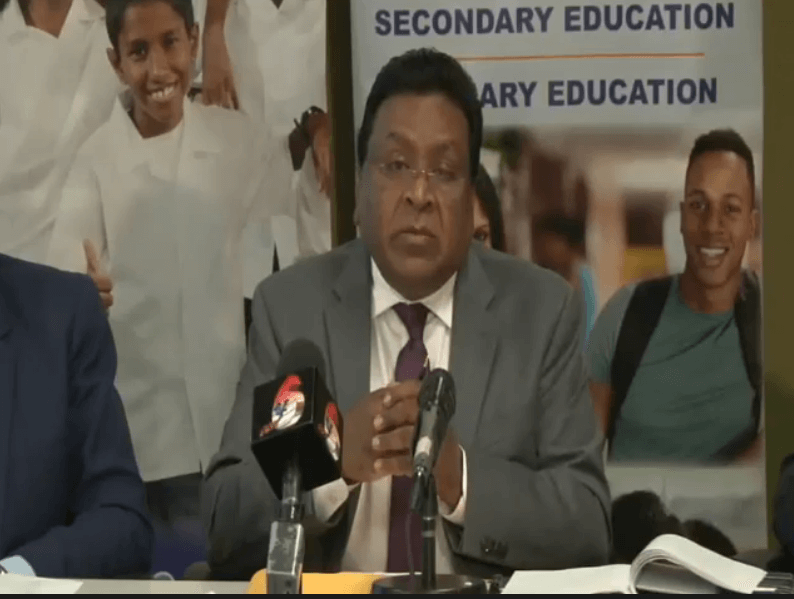 The Education Ministry has rubbished claims that students at a school in Morvant were made to share Secondary Entrance Assessment (SEA) exam scripts due to insufficient numbers provided to the school.

Speaking at a media conference at the Ministry’s St Vincent Street, Port-of-Spain headquarters, Mervyn Sambucharan, Acting Director at the Research and Evaluation Division said there is no way such a situation could have occurred.

He explained that exam packages are prepared for each individual student, which means that exact numbers are delivered to schools for distribution.

“When it is time for marking… it is uniquely done per child.”

He said based on this unique process in the preparation of the exam packages it was a “virtually impossibility” that students could have shared scripts.

Sambucharan further explained that the exam is set up where it is one package per student and all answers are contained in the scripts.

“Just dispel any notion that that could take place. There is no opportunity for that at all.”

In spite of the rumour, the Ministry reported that there were absolutely no hiccups in the administration of the exam.

The SEA exam began at 8.30 am and ran for three hours and 20 minutes. Students were given a half hour break after the first two components of the exam.

Asked for an update on the decision regarding the publication of students’ results in the daily newspapers, Education Minister Anthony Garcia said meetings with stakeholders are still taking place so decision has yet been made.

He assured that whatever agreement is arrived at, it will be communicated to all relevant parties long before results are released.

And, Chief Education Officer Harrilal Seecharan sought to set the record straight on what he said is misinformation in the media regarding the concessions granted to students writing the 2019 exam.

A total of 298 concessions were granted. Of those concessions, 62 applications were withdrawn.

Seecharan said 71 applications were denied due to a range of factors including insufficient or no supporting documentation and outdated medical or pyschoeducational reports.

He said the actual granting of concessions is done on a case by case basis.

In the event that a concession is not granted, Seecharan said parents can appeal the decision.

He urged parents of students seeking concessions for the 2020 to ensure that applications are sent in. The deadline for the submission of these applications has been extended to June 2019.

It is recommended that these applications be sent in two years prior to ensure that arrangements are made to accommodate students requiring concessions, Seecharan said.

He said while provisions are made in emergency situations, requests should not be made at the eleventh hour, noting that up to late last night the Ministry was working to address last minute applications.

The Chief Education Officer said 254 concessions have already been received by the Ministry.

All systems go for SEA exam on April 4