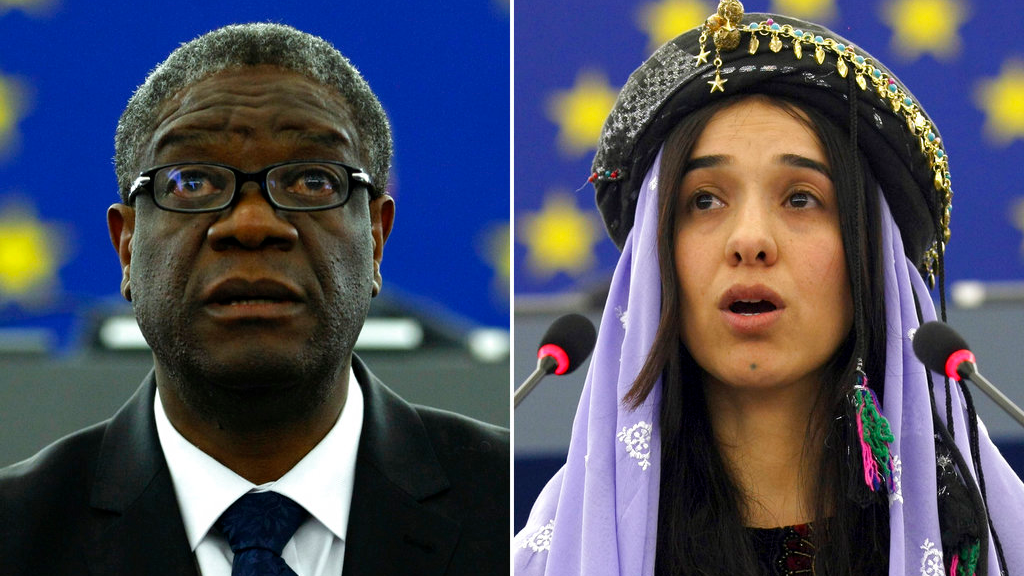 Doctor Denis Mukwege, from the Democratic Republic of Congo, left, on Nov. 26, 2014 and Yazidi woman from Iraq, Nadia Murad on Dec. 13, 2016 as they both address the European parliament in Strasbourg, France. (AP Photos/Christian Lutz, file)

The Nobel Peace Prize on Friday was awarded to a Congolese doctor and an Iraqi woman who once was a captive of the Islamic State group for their work to highlight and eliminate the use of sexual violence as a weapon of war.

Dr. Denis Mukwege and Nadia Murad "have made a crucial contribution to focusing attention on, and combating, such as war crimes," the Norwegian Nobel Committee said in its announcement.

"Denis Mukwege is the helper who has devoted his life to defending these victims. Nadia Murad is the witness who tells of the abuses perpetrated against herself and others."

Mukwege, 63, founded a hospital in eastern Congo's Bukavu and has treated thousands of women, many of whom were victims of gang rape. Armed men tried to kill him in 2012, forcing him to temporarily leave the country.

Eastern Congo has seen more than two decades of conflict among armed groups that either sought to unseat presidents or simply grab control of a piece of the country's vast mineral wealth.

Murad is one of an estimated 3,000 Yazidi girls and women who were victims of rape and other abuses by the IS army. She managed to escape after three months and chose to speak about her experiences. At the age of 23, she was named the U.N.'s first Goodwill Ambassador for the Dignity of Survivors of Human Trafficking.

The Yazidis are an ancient religious minority, falsely branded as devil-worshippers by Sunni Muslim extremists. IS, adopting a radical interpretation of ancient Islamic texts, declared that Yazidi women and even young girls could be taken as slaves.

"We want to send a message that women who constitute half the population in those communities actually are used as weapons and that they need protection, and that the perpetrators have to be prosecuted and held responsible," said Berit Reiss-Andersen, chairwoman of the Norwegian committee.

The award comes amid heightened attention to sexual abuse of women in the workplace and socially, broadly referred to as the "#metoo" movement.

"Metoo and war crimes is not quite the same thing, but they do however have in common that it is important to see the suffering of women," said Reiss-Andersen.

The 2018 prize is worth 9 million Swedish kronor ($1.01 million). Last year's winner was the International Campaign to Abolish Nuclear Weapons.

In other Nobel prizes this year, the medicine prize went Monday to James Allison of the University of Texas M.D. Anderson Cancer Center and Tasuku Honjo of Kyoto University, whose discoveries helped cancer doctors fight many advanced-stage tumors and save an "untold" numbers of lives.

Scientists from the United States, Canada and France shared the physics prize Tuesday for revolutionizing the use of lasers in research.

On Wednesday, three researchers who "harnessed the power of evolution" to produce enzymes and antibodies that have led to a new best-selling drug won the Nobel Prize in chemistry.

The winner of the Nobel Memorial Prize in Economic Sciences, honoring Alfred Nobel, the founder of the five Nobel Prizes, will be revealed on Monday.

No Nobel literature prize will be awarded this year due to a sex abuse scandal at the Swedish Academy, which chooses the winner. The academy plans to announce both the 2018 and the 2019 winner next year — although the head of the Nobel Foundation has said the body must fix its tarnished reputation first.

The man at the center of the Swedish Academy scandal, Jean-Claude Arnault, a major cultural figure in Sweden, was sentenced Monday to two years in prison for rape.

The Latest: Ashkin is oldest Nobel laureate ever