North Korea 2nd ICBM test puts much of US in range: experts 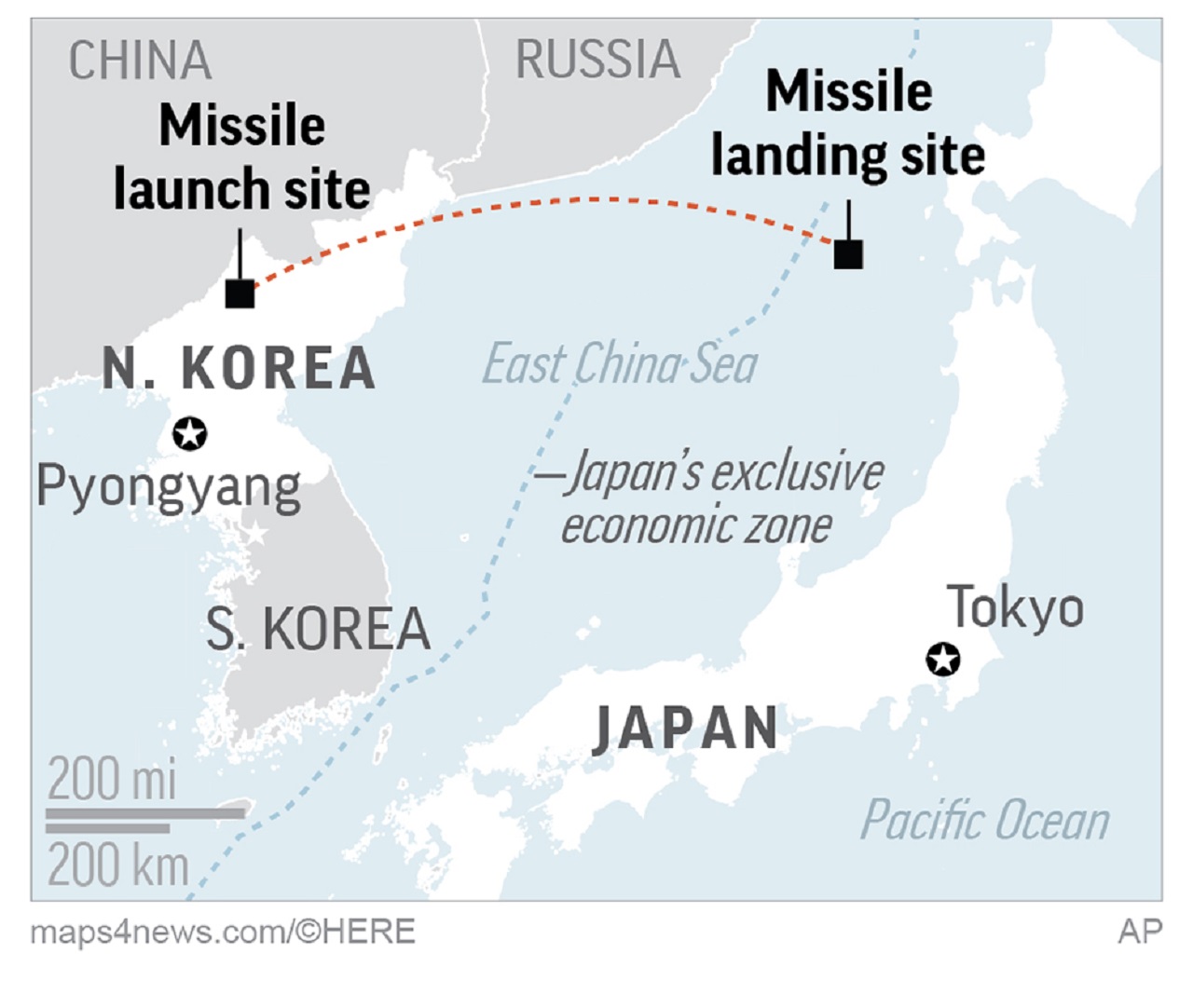 North Korea on Friday test-fired its second intercontinental ballistic missile (ICBM), which flew longer and higher than the first according to its wary neighbours, leading analysts to conclude that a wide swath of the U.S., including Los Angeles and Chicago, is now within range of Pyongyang's weapons.

Japanese government spokesman Yoshihide Suga said the missile, launched late Friday night, flew for about 45 minutes — about five minutes longer than the ICBM North Korea test-fired on July 4. The missile was launched on very high trajectory, which limited the distance it traveled, and landed west of Japan's island of Hokkaido.

"We assess that this missile was an intercontinental ballistic missile, as had been expected," Pentagon spokesman Navy Capt. Jeff Davis said in Washington.

Analysts had estimated that the North's first ICBM could have reached Alaska, and said Friday that the latest missile appeared to extend that range significantly.

David Wright, a physicist and co-director of the global security program at the Union of Concerned Scientists, said in Washington that if reports of the missile's maximum altitude and flight time are correct, it would have a theoretical range of at least 10,400 kilometers (about 6,500 miles). That means it could have reached Los Angeles, Denver and Chicago, depending on variables such as the size and weight of the warhead that would be carried atop such a missile in an actual attack.

Bruce Klingner, a Korean and Japanese affairs specialist at the Heritage Foundation think tank in Washington, said, "It now appears that a significant portion of the continental United States is within range" of North Korean missiles. Klingner recently met with North Korean officials to discuss denuclearization, the think tank said.

Washington and its allies have watched with growing concern as Pyongyang has made significant progress toward its goal of having all of the U.S. within range of its missiles to counter what it labels as U.S. aggression. There are other hurdles, including building nuclear warheads to fit on those missiles and ensuring reliability. But many analysts have been surprised by how quickly leader Kim Jong Un has developed North Korea's nuclear and missile programs despite several rounds of U.N. Security Council sanctions that have squeezed the impoverished country's economy.

President Donald Trump has said he will not allow North Korea to obtain an ICBM that can deliver a nuclear warhead. But this week, the Defense Intelligence Agency reportedly concluded that the North will have a reliable ICBM capable of carrying a nuclear weapon as early as next year, in an assessment that trimmed two years from the agency's earlier estimate.

A spokesman for Gen. Joseph Dunford, chairman of the Joint Chiefs of Staff, said Friday that Dunford met at the Pentagon with the commander of U.S. forces in the Pacific, Adm. Harry Harris, to discuss U.S. military options in light of North Korea's missile test.

Prime Minister Abe said Japan would cooperate closely with the U.S., South Korea and other nations to step up pressure on North Korea to halt its missile programs.

South Korea's Joint Chiefs of Staff said the missile reached an estimated height of 3,700 kilometers (2,300 miles) before landing at sea about 1,000 kilometers (625 miles) away. It appeared to be more advanced than the ICBM North Korea previously launched, it said.

The "Hwasong 14" ICBM test-fired earlier this month was also launched at a very steep angle, a technique called lofting, and reached a height of more than 2,500 kilometers (1,550 miles) before splashing down in the ocean 930 kilometers (580 miles) away. Analysts said that missile could be capable of reaching most of Alaska or possibly Hawaii if fired in an attacking trajectory.

There was no immediate confirmation of the launch by North Korea. The day's broadcast on state-run television had already ended when the news broke at around midnight Pyongyang time.

July 27 is a major national holiday in North Korea called Victory in the Fatherland Liberation War Day, marking the day when the armistice was signed ending the 1950-53 Korean War. That armistice is yet to be replaced with a peace treaty, leaving the Korean Peninsula technically in a state of war.

North Korea generally waits hours or sometimes a day or more before announcing launches, often with a raft of photos in the ruling party newspaper or on the television news. Kim Jong Un is usually shown at the site to observe and supervise major launches.

Late night launches are rare. North Korea usually conducts its missile and underground nuclear tests in the morning. It's likely the North launched the missile at night and from the remote province of Jagang to demonstrate its operational versatility. To have a real deterrent, it's important for North Korea to prove it can launch whenever and wherever it chooses, making it harder for foreign military observers trying to detect their activities ahead of time.

Trump, in fresh warning: North Korea 'will be taken care of'