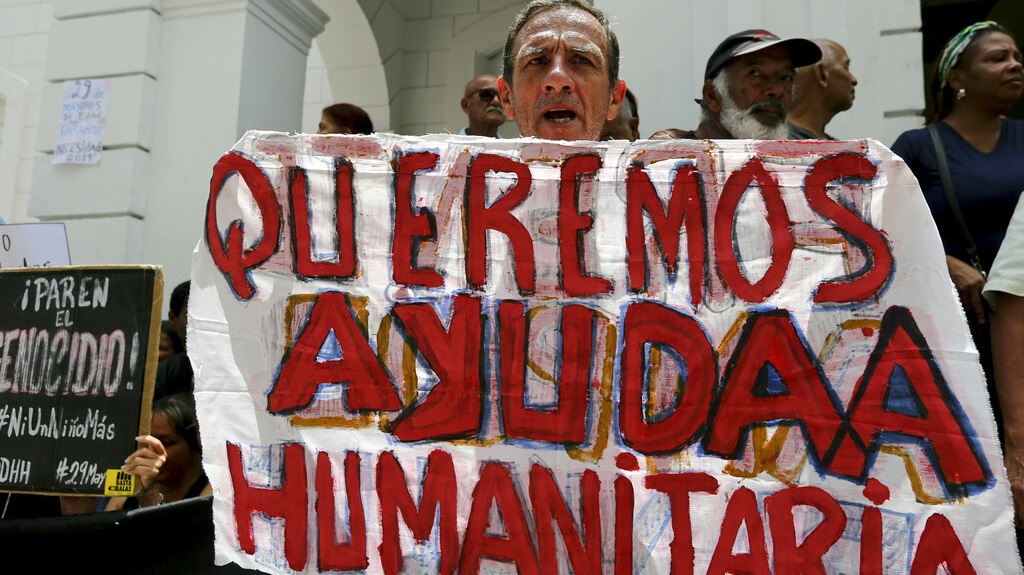 A protester holds up the Spanish message "We want Humanitarian Aid" outside the Venezuelan Red Cross headquarters where demonstrators shouted slogans against Venezuelan President Nicolas Maduro in Caracas, Venezuela, Wednesday, May 29, 2019. Demonstrators protested the deaths of several children with leukemia who were awaiting bone marrow transplants, which has ignited a bitter dispute between the government and opponents over who is to blame. (AP Photo/Fernando Llano)

Norway's government on Wednesday praised progress made in talks between representatives of Venezuelan President Nicolás Maduro and the political opponents trying to oust him, even as tensions mounted back home.

The second round of meetings in Norway that ended Wednesday were part of international efforts to resolve a conflict between Maduro and the U.S.-backed opposition leader Juan Guaidó over who should run the country.

"The parties have demonstrated their willingness to move forward in the search for an agreed-upon and constitutional solution for the country, which includes political, economic and electoral matters," she said in a statement.

Norway also urged both sides to exercise "utmost caution" in their public statements about the talks in order to maintain the integrity of the process and achieve results.

Speaking on Venezuelan state television Wednesday night, Maduro said both parties had been negotiating in secret for two to three months. He added that he wants a peaceful resolution for Venezuela in "prudent" talks.

"I am proud of the delegation we have in Norway," Maduro said. "And I am proud that we are in a constructive dialogue with the Venezuelan opposition."

In a statement, the opposition said the meeting ended without an agreement but that it was prepared to continue working with Norway to find a solution to Venezuela's crisis. It also said it remained committed to its goals of an end to Maduro's rule, followed by a transitional government and free elections.

The mediation will be useful as long as there are "elements" that can lead to a "real solution," the opposition said.

Guaidó declared he was assuming presidential powers in January as head of the opposition-led congress, arguing that Maduro's re-election had been illegal. Dozens of countries, led by the U.S., have recognized him, but Maduro remains firmly in control of the institutions of state.

The opposition leader launched a failed military uprising on April 30 that triggered a government crackdown against the opposition.

Even as negotiations played out in Norway, the pro-Maduro Supreme Tribunal of Justice stripped the immunity from prosecution of opposition lawmaker, Rafael Guzman, bringing to 15 the number of anti-government politicians accused of treason and instigating rebellion, according to a court statement released Wednesday.

The congressional vice president, Edgar Zambrano, was arrested May 8 on similar allegations, while several other accused National Assembly members have sought refuge inside foreign embassies in Caracas.

"We will continue advancing in the defense of our constitution toward achieving peace and democracy," tweeted Miranda state Gov. Héctor Rodríguez, who is part of Maduro's negotiating team.

Maduro accuses the Trump administration of mounting a coup against him to install a puppet government led by Guaidó. Maduro maintains backing from Russia, China and Cuba and many other nations.

The socialist leader also holds onto control of the military, despite deepening shortages of basic goods that have helped drive 3.7 million to flee the country in Latin America's biggest migration crisis.

Drivers wait in long lines to fill up with gasoline across much of the nation, the result of Venezuela's failing oil industry and punishing U.S. sanctions aimed at pressuring Maduro from power.

Shortages of life-saving medicine that have led to the deaths of children battling cancer have also ignited a dispute between the government and opponents over who is to blame.

The opposition had previously ruled out talks, accusing Maduro of using past negotiations in a play for time.

Norway has a long, successful history of foreign mediation. It hosted peace talks between Israelis and Palestinians in September 1993 and Maoist rebels and the government in the Philippines in 2011.

The government also brokered a 2002 cease-fire between Sri Lankan government and Tamil Tiger rebel negotiators. Seven years ago, mediators from the Colombian government and left-wing rebels held their first direct talks in a decade in Norway.