Now for the hard part: EU-UK trade talks to be complicated 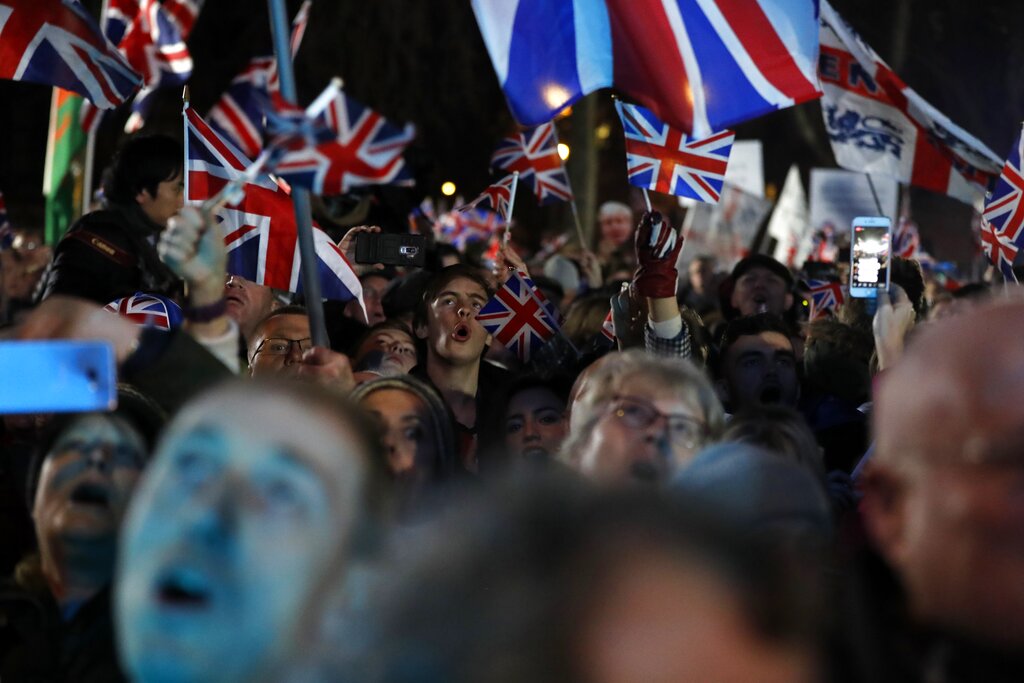 Brexit supporters celebrate during a rally in London, Friday, Jan 31, 2020. Britain leaves the European Union after 47 years, leaping into an unknown future in historic blow to the bloc. (AP Photo/Frank Augstein)

If you thought the drawn-out battle over the UK's departure from the European Union was painful, wait until you see what comes next.

While Britain formally left the EU at 11pm local time Friday, the hard work of building a new economic relationship between the bloc and its ex-member has just begun.

There are difficult negotiations ahead as the UK goes its own way while trying to preserve links with its biggest trading partner, covering everything from tariffs and product standards to British industry's ability to recruit foreign workers and the EU's access to UK fishing grounds.

"There's a massive agenda to be agreed: trade in goods, trade in services, data protection, security cooperation, aviation, road haulage, fishing, you know the list is endless,'' said Jill Rutter, a senior research fellow at UK in a Changing Europe, a think tank that studies Britain's relations with the now 27-nation bloc. "It is unprecedented.''

For now, little has changed.

The two sides agreed on a transition period that keeps current rules and regulations in effect until Dec 31.

But that gives the UK government just 11 months to negotiate a comprehensive trade deal that could decide the prospects of British businesses for decades to come.

The EU accounted for 54% of Britain's imports and 43% of its exports in 2016, according to the Office for National Statistics.

"Never has France or the French people – or, I think it is fair to say, any European people – been driven by a desire for revenge or punishment," he said.

British Industry groups are already lining up to protect their interests.

Hotel and restaurant owners say they need to maintain the existing supply of workers from the continent to ensure rooms are cleaned and dinners are prepared.

Banks and insurance companies are lobbying to maintain access to the lucrative European market.

And fishermen want to regain control of fishing grounds they believe have been plundered by European rivals for the past four decades.

If that wasn't enough for Prime Minister Boris Johnson and his ministers, the British government also is keen to negotiate separate trade deals with individual countries now that the country has broken away from the EU.

Johnson's top trade prize outside the EU is the United States, the world's biggest economy and the destination for 18% of British exports.

But the Americans have already made difficult demands.

Secretary of State Mike Pompeo was in London last week warning of security concerns linked to Chinese telecoms giant Huawei and pressuring British officials to overturn their decision to let the company take part in upgrading the country's wireless network.

US Ambassador Woody Johnson has been lobbying for British officials to open their doors to American goods such as chlorine-washed chicken that have been banned in the UKbecause of production standards the EU disagrees with.

And US medical companies are pushing for access to Britain's National Health Service.

Reconciling all these demands will be difficult because any attempt to meet US demands by lowering British standards will push Britain further away from European rules.

The EU has already made clear that the price of access to its markets is continued adherence to the bloc's regulations.

Trade negotiations, which are always complex, will be even more complicated because simultaneous negotiations will be taking place with both the EU and the US, think tank researcher Rutter said.
"It's like playing 3-D chess,'' she said.

Even the most difficult issue settled during the first round of negotiations between the EU and the British government — the knotty question of Northern Ireland — remains problematic.

In an effort to protect the peace process in Northern Ireland and finally win approval for his EU withdrawal deal, Johnson agreed that Northern Ireland would keep the same rules as the bloc's single market for goods after Brexit.

As a result, customs checks won't be needed on the border between Northern Ireland, which is part of the UK, and the Republic of Ireland.

Instead, some checks will have to be conducted on goods that enter Northern Ireland from the rest of the UK that are destined for the EU.

This essentially means that Johnson agreed to place a trade border in the Irish Sea — upsetting many of his own allies because it treats Northern Ireland differently to other parts of the United Kingdom.

Unionists who want to remain part of the UK fear the deal will push Northern Ireland closer to the Irish Republic over time.

As complicated as this sounds, the details of exactly how the arrangement will work haven't been finalized.

"The Withdrawal Agreement provided a high-level blueprint without setting out the exact details of how trade across the Irish border and between Great Britain and Northern Ireland will work,'' a House of Commons report on the agreement said.

"The detail will be worked out in discussions between the EU and the UK once the UK has left and the transition period starts.''

Johnson has also promised Northern Ireland's farmers — the region's biggest industry — that the new trade deal with the EU will ensure they retain unfettered access to the rest of the UK market, which accounts for 50% of their sales.

Ivor Ferguson, president of the Ulster Farmers' Union, wants an urgent acceleration of talks on a trade deal.

Farming, he points out, is a capital-intensive business, with farmers working on low margins and taking out big loans.

They need time to plan.

"The heavy lifting is only beginning when we leave the EU,'' he said.

Workers from the EU have started to vote with their feet.

London Mayor Sadiq Khan said last week that fewer EU citizens are coming to work in the city these days, and too many are leaving, causing employment shortages in industries like construction, hospitality and social care.

At a small gathering of reporters, he repeatedly stressed his dismay at the turn of events and insisted that London was a global city that welcomed EU citizens.

"And it's really important that the message 'London is open' is heard loud and clear,'' he said.

"And it's really important that we continue to be seen as pluralistic, open-minded and has values that are conducive to talented EU citizens continuing to come to London.''