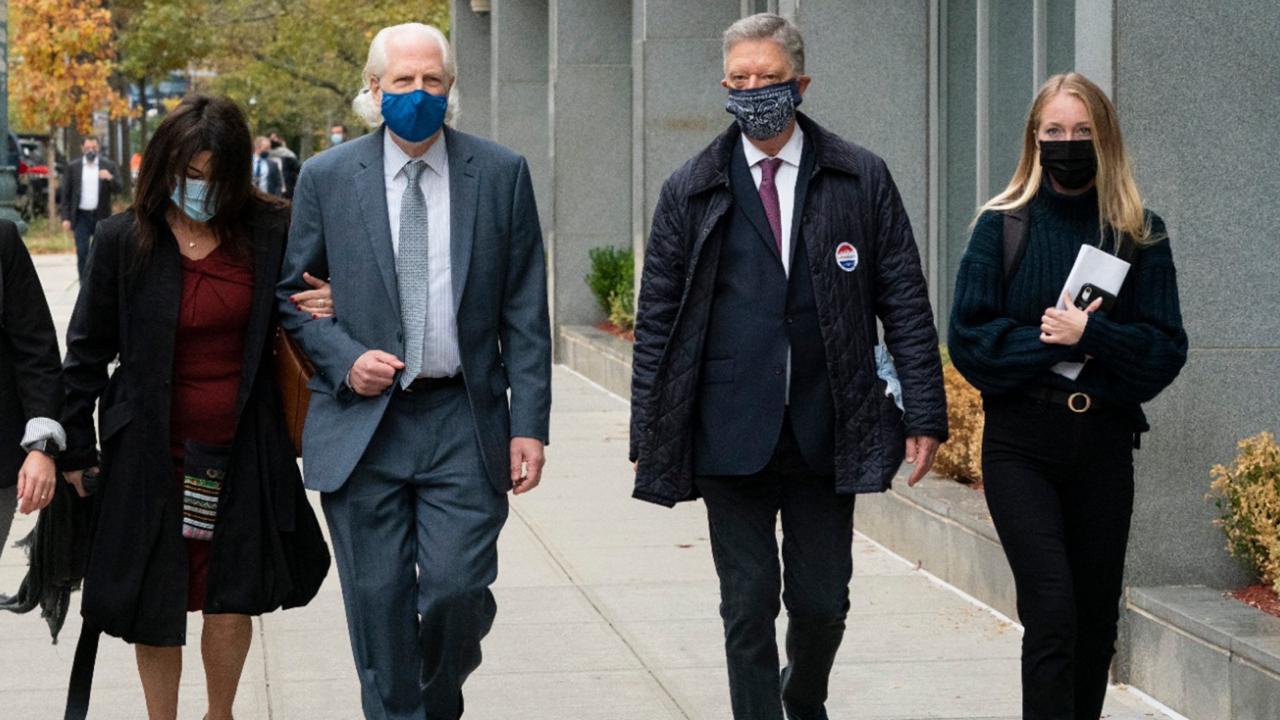 Toni Natalie, left, and India Oxenberg, right, arrive with their attorneys at Brooklyn federal court for a sentencing hearing for self-improvement guru Keith Raniere, Tuesday, October 27, 2020 in New York. Raniere, whose organization NXIVM attracted millionaires and actresses among its adherents, is expected to be sentenced Tuesday on convictions that he turned some female followers into sex slaves branded with his initials. (AP Photo/Mark Lennihan)

Disgraced self-improvement guru Keith Raniere, whose NXIVM followers included millionaires and Hollywood actors, was sentenced to 120 years on Tuesday for turning some adherents into sex slaves branded with his initials and sexually abusing a 15-year-old.

US District Judge Nicholas Garaufis called Raniere “ruthless and unyielding” in crimes that were “particularly egregious” because he targeted girls and young women in the sex-trafficking conspiracy that resulted in Raniere's conviction last year.

He handed down the unusually stiff sentence in Brooklyn federal court after hearing 15 victims call for a long prison term to reflect the nightmares and anguish they'll confront the rest of their lives.

As he announced the sentence, Garaufis noted that Raniere labelled some of the victims' claims lies. The judge told a woman who Raniere ordered to be kept in a room for two years when she was 18: “What happened to you is not your fault." He said that went for the other victims too.

Raniere, who looked at victims as they spoke in the courtroom, maintained his defiant tone, although he said he was “truly sorry” that his organization led to a place where “there is so much anger and so much pain."

“I do believe I am innocent of the charges. ... It is true I am not remorseful of the crimes I do not believe I committed at all," Raniere said.

Prosecutors had sought life in prison, while a defence lawyer told the judge Raniere should face 20 years behind bars.

The sentencing was the culmination of several years of revelations about Raniere’s program, NXIVM, which charged thousands of dollars for invitation-only self-improvement courses at its headquarters near Albany, New York, along with branches in Mexico and Canada. Adherents endured humiliation and pledged obedience to Raniere as part of his teachings.

NXIVM has been the subject of two TV documentary series this year, HBO’s “The Vow,” and the Starz series “Seduced: Inside the NXIVM Cult.”

Prosecutors said Raniere, 60, led what amounted to a criminal enterprise, inducing shame and guilt to influence and control co-conspirators who helped recruit and groom sexual partners for him. Raniere was convicted on charges including racketeering, alien smuggling, sex trafficking, extortion and obstruction of justice.

After victims spoke for 2 1/2 hours, the judge grew impatient and a bit angry when defence lawyer Marc Agnifilo sought to portray his client's organization as “doing good” for women before things turned bad for some.

The judge said Raniere groomed a 13-year-old girl so that “two years later he's having sex with a 15-year-old girl."

At another point, he cut Agnifilo off as the lawyer tried to argue victims were not always factually correct.

“You're starting to tire me out here," the judge said. “It's pretty clear he took advantage of people sexually."

Earlier, India Oxenberg, the daughter of “Dynasty” actor Catherine Oxenberg, called Raniere an “entitled little princess” and a sexual predator and lamented that she “may have to spend the rest of my life with Keith Raneire’s initials seared into me.”

Another victim said she had the initials removed from her body by a plastic surgeon.

Other victims labelled him a liar, a parasite, a terrorist, a sociopath, a racist, a sadist and “a toddler with too much power and zero accountability."

And the woman who was sexually abused beginning at age 15 said Raniere groomed her by telling her she was mature for her age.

She said that when Raniere saw blood running down her arm after a botched suicide attempt, he revealed his self-obsessed attitude, asking her: “Do you know how bad that could have been for me if you killed yourself?”

The likelihood of leniency had seemed to dissipate with the recent sentencing of Clare Bronfman, 41,  an heir to the Seagram’s liquor fortune, for her role in NXIVM, which has been described by some ex-members as a cult. Bronfman was sentenced to nearly seven years in prison.

Prosecutors had only sought five years.

Ex-followers told the judge that Bronfman for years had used her wealth to try to silence NXIVM defectors.

Reniere’s followers called him “Vanguard.” To honour him, the group formed a secret sorority comprised of female “slaves” who were branded with his initials and ordered to have sex with him, the prosecutors said. Women were also pressured into giving up embarrassing information about themselves that could be used against them if they left the group.

Along with Bronfman, Raniere’s teachings won him the devotion of Hollywood actors, including Allison Mack of TV’s “Smallville.” Mack also has pleaded guilty to charges in the case and is awaiting sentencing.

Assistant U.S. Attorney Tanya Hajjar told the judge only a life sentence would protect the public because Raniere otherwise “would be committing crimes today, tomorrow and in the future."

Outside court afterwards, Barbara Boucher, who described herself as the first whistleblower of Raniere's scam when she left the group 11 years ago, said the sentencing left her “enormously relieved."

“I loved Keith for many years. I really thought he was my soulmate," said Boucher, who recalled her role in helping to build the organization when she first viewed it as a kind of Camelot where people could be empowered to be more loving and compassionate and live better lives.

“A lot of people today in this room will carry their wounds with them for life. You don't recover fully from something like this. It's deep," she said. Still, the once-successful financial planner sees a future.

“This is a 20-year book and this is the last chapter of the book and when I leave here today, that book is closing," Boucher said.