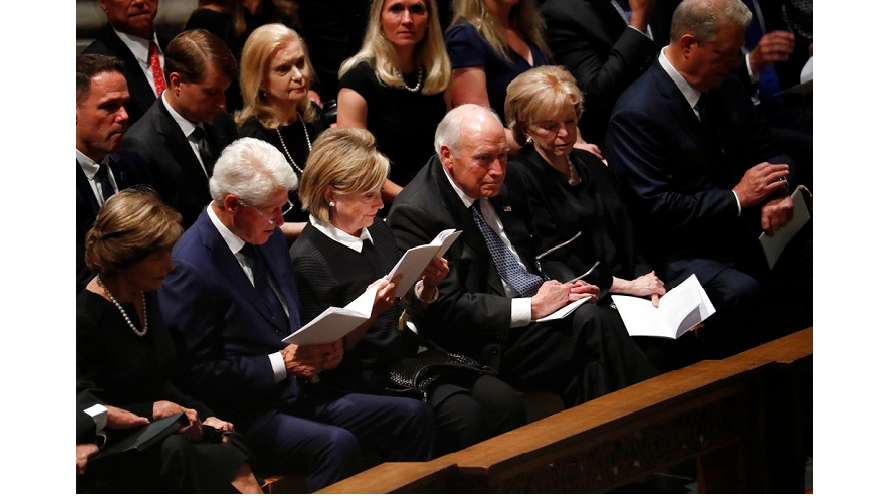 The memorial service for John McCain is underway at the Washington National Cathedral, where the late Republican senator is getting a presidential farewell, but not from the actual sitting president.

Three former presidents, scores of members of Congress, current and former world leaders and family and friends have gathered Saturday morning to eulogize McCain as an American hero.

His flag-draped casket was escorted by military body bearers up the cathedral steps under gray skies.

Among those in the front row at the cathedral are Barack and Michelle Obama, George and Laura Bush, Bill and Hillary Clinton, as well as Dick Cheney and Al Gore.

McCain's motorcade arrived from the Capitol, where he laid in state overnight, and the procession made a stop at the Vietnam Veterans Memorial, where McCain's wife, Cindy, placed a wreath.

At McCain's request, Obama, a Democrat, and Bush, a Republican, are among those speaking about the six-term senator during Saturday's service.

It is the last public event in Washington, where McCain lived and worked over four decades, and part of McCain's five-day, cross-country funeral procession. He died Aug. 25 at age 81.

Trump was told to stay away but isn't far.

The president planned to remain in Washington this weekend. Two of his top aides, White House chief of staff John Kelly and Defense Secretary James Mattis, flanked Cindy McCain as she approached the memorial and joined the service. Trump's daughter Ivanka Trump and son-in-law Jared Kushner are also in attendance.

McCain was a decorated veteran who was held for more than five years as a prisoner of war in Vietnam. He refused early release.

After church service, McCain to depart Arizona for last time