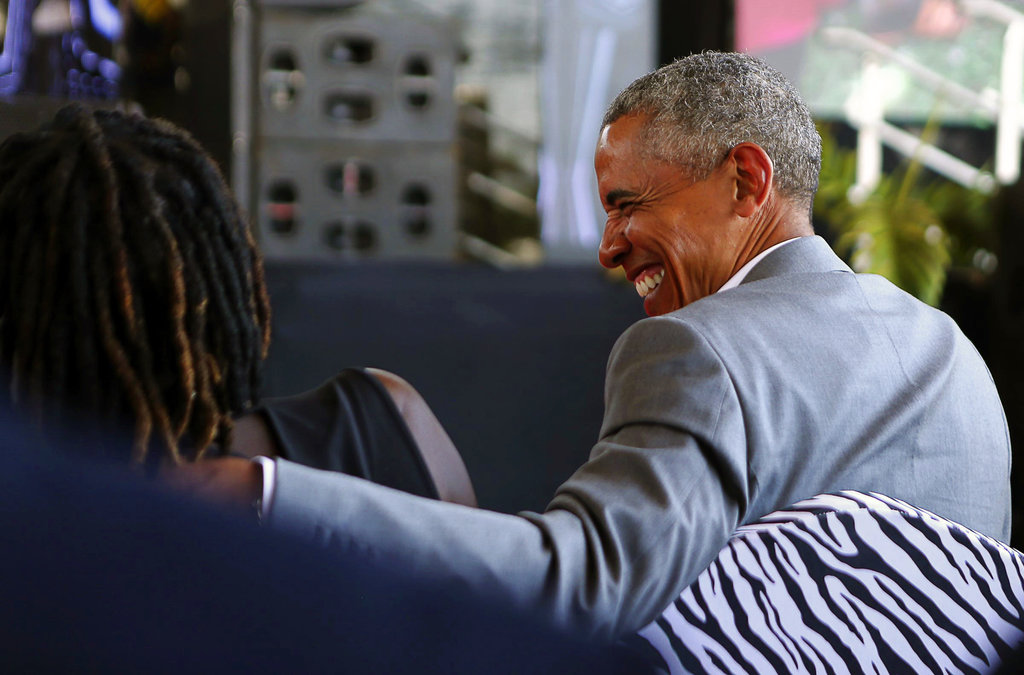 Former U.S. President Barack Obama is set to make his highest-profile speech since leaving office, urging people around the world to respect human rights and other values under threat in an address marking the 100th anniversary of anti-apartheid leader Nelson Mandela's birth.

While not directly mentioning his successor, President Donald Trump, Obama's speech on Tuesday in South Africa is expected to counter many of Trump's policies, rallying people to keep alive the ideas that Mandela worked for including democracy, diversity and good education for all.

An estimated 14,000 people were gathering at a cricket stadium in Johannesburg for the speech, which will be streamed online. South African President Cyril Ramaphosa and Mandela's widow Graca Machel will introduce Obama for the annual Nelson Mandela Lecture.

"Just by standing on the stage honoring Nelson Mandela, Obama is delivering an eloquent rebuke to Trump," said John Stremlau, professor of international relations at Witwatersrand University in Johannesburg, who called the timing auspicious as the commitments that defined Mandela's life are "under assault" in the U.S. and elsewhere.

"Yesterday we had Trump and Putin standing together, now we are seeing the opposing team: Obama and Mandela."

This is Obama's first visit to Africa since leaving office in early 2017. He stopped earlier this week in Kenya, where he visited the rural birthplace of his late father.

Obama's speech is expected to highlight how the Nobel Peace Prize winner, who was imprisoned for 27 years, kept up his campaign against what appeared to be insurmountable odds to end apartheid, South Africa's harsh system of white minority rule.

Mandela, who was released from prison in 1990 and became South Africa's first black president four years later, died in 2013, leaving a powerful legacy of reconciliation and diversity along with a resistance to inequality, economic and otherwise.

Obama has shied away from public comment on Trump, whose administration has reversed or attacked notable achievements of his predecessor. The U.S. under Trump has withdrawn from the 2015 Paris climate agreement and the Iran nuclear deal while trying to undercut the Affordable Care Act or "Obamacare."

Instead of commenting on politics, Obama's speech was drawing on broader themes and his admiration for Mandela, whom America's first black president saw as a mentor.

When Obama was a U.S. senator he had his picture taken with the newly freed Mandela. After Obama became president he sent a copy of the photo to Mandela, who kept it in his office. Obama also made a point of visiting Mandela's prison cell and gave a moving eulogy at Mandela's memorial service in 2013, saying the South African leader's life had inspired him.

Many South Africans view Obama as a successor to Mandela because of his groundbreaking role and his support for racial equality in the U.S. and around the world.

Moses Moyo, a 32-year-old Uber driver, was among the thousands lining up for Obama's speech. "I think he'll speak about how Mandela changed the system here in South Africa, how he ended apartheid and gave hope for the poor and encouraged education," he said. Many people in South Africa are discouraged by corruption, he added, as the ruling African National Congress struggles to maintain the legacy that Mandela and others established.

Netflix says it has signed Barack and Michelle Obama