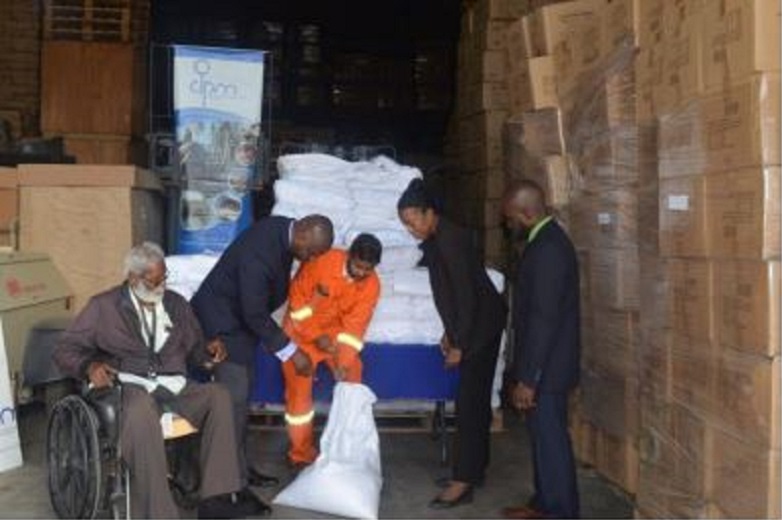 CEO of the ODPM Major General (Ret’d) Rodney Smart and PS of the Ministry of Rural Development and Local Government, Ms Desdra Bascombe, inspect one of the sandbags during the official handover ceremony at the ODPM’s warehouse.

The Office of Disaster Preparedness and Management (ODPM) has distributed 10,000 sandbags to the Ministry of Rural Development and Local Government (MoRDLG) as part of its continued drive to support first responder agencies’ efforts at reducing discomfort, property damage and loss after heavy rainfall.

The handover ceremony took place at the ODPM’s Warehouse in Arima on Friday. The sandbags are for the Disaster Management Units (DMUs) to distribute within their Corporations and were handed over by the Chief Executive Officer (CEO) of the ODPM, retired Major General Rodney Smart to the Permanent Secretary of the MoRDLG, Desdra Bascombe.

In his delivery message, retired Major General Smart reminded the audience of the recent observance of the International Day of Disaster Risk Reduction (IDRR) on October 13, 2019. He indicated that the distribution was linked to the (IDRR) Day and that the ODPM remains fully committed to boosting the capacity and capabilities of all first responder agencies. In particular, he singled out the DMUs of the MoRDLG, which he said are usually the ‘first out the door’ when it comes to adverse weather events. The General also said that this delivery brought the total sandbags distributed this year to almost 20,000 adding that he hopes fewer homes and businesses would experience the devastating effects of flooding.

In her response, Bascombe thanked Smart for the ODPM’s timely intervention and said she looks forward to continued engagement with the organisation. She said the sandbags would be distributed immediately to the various corporations as this would greatly help build resistance and resilience within vulnerable communities.