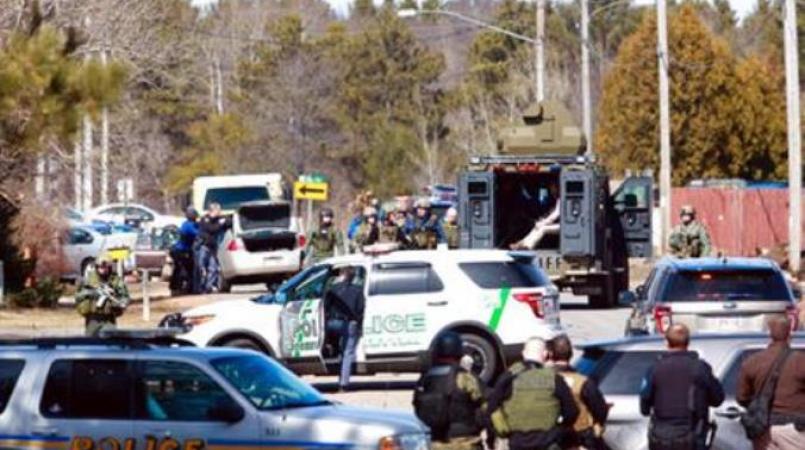 Everest Metro Det. Jason Weiland was shot as he approached an apartment complex in Weston, a small town about 90 miles west of Green Bay, according to a person with knowledge of the investigation who requested anonymity because he was not authorized to comment.

Weiland was among officers who responded to the building following attacks at a bank and a law firm on Wednesday afternoon, according to the source. The suspect was taken into custody after a standoff at the apartment complex that ended in gunfire.

Weiland was a field training officer and member of a task force for internet crimes against children, according to the Everest Police Department's website. His LinkedIn page says he had worked as a narcotics detective for the Marathon County Sheriff's Department, and as a police officer and corrections officer for Marathon City and Marathon County.

Calls to the Everest department were referred to the state Department of Justice, where a spokesman didn't immediately reply to texts or phone messages left Thursday.

Police characterized the initial shooting at the Marathon Savings Bank in Rothschild on Wednesday afternoon as a "domestic situation," but have provided no details about the suspect or victims or even said whether anyone was wounded and survived. They scheduled a 4 p.m. Thursday briefing.

The bank shooting was reported around midday. Officers arrived at the bank to find two people were shot and the suspect had fled. It wasn't clear if those two victims were among the dead.

A second call came about 10 minutes later from Tlusty, Kennedy and Dirks, a law firm in nearby Schofield. Authorities did not say if one of the victims was killed there. The action then moved to an apartment complex in Weston.

Dozens of police vehicles were parked Thursday in front of the apartment complex, which was ringed by yellow crime-scene tape. Officers could be seen walking around with clipboards.

Jason Smith, a deputy administrator for the state Department of Justice's Division of Criminal Investigation, said more than 100 officers were investigating and that more information would be released Thursday.

Kelly Hanson, a 21-year-old woman who lives in the complex, told The Associated Press that she looked out of her apartment window at around 1:15 p.m. Wednesday to see a squad car approach, and a few seconds later heard a gunshot and saw an officer fall. She said other officers put the wounded policeman in an armored SWAT vehicle and took him away. She couldn't tell if he was alive or dead and police have not said if this was the officer who died.

Janet Schoenfeldt, who owns a hair salon behind the bank, said she was at the front desk around 1 p.m. Wednesday when squad cars poured into the parking log, followed by ambulances. An officer then told her to close her shop and get out of the area.

"It's a sad reality. Someone taking innocent lives over something he's upset about," Schoenfeldt. "We're a small-knit community. You just don't think it will happen here. Everybody says that, but you know what? It does happen here."

FEATURED IMAGE CAPTION: Numerous law enforcement vehicles and SWAT teams respond to a shooting Wednesday, March 22, 2017, at an apartment complex in Rothschild, Wis. The shootings happened at a bank, a law firm and an apartment complex, where officers, including a SWAT team, were in a standoff with the suspect late in the afternoon, Wausau police Capt. Todd Beaten said at a news conference. The area is about 90 miles west of Green Bay.