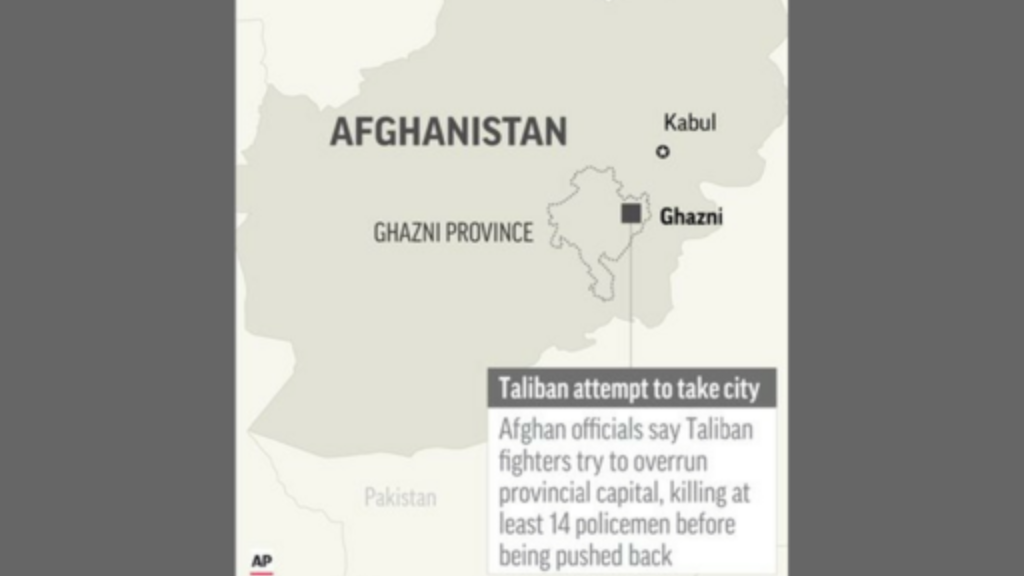 The Taliban tried to overrun a provincial capital in Afghanistan early on Friday, hiding inside homes before slipping into city streets in the night to attack security forces and killing at least 14 policemen before being pushed back, officials said.

The overnight attack in the southeastern city of Ghazni, the capital of a province with the same name, also wounded at least 20 members of the security forces, said Baz Mohammad Hemat, the administrator of the Ghazni city hospital.

The city was in lockdown and fighting continued throughout the day Friday, with sporadic bursts of gunfire from Taliban fighters who had hunkered down in elevated positions inside Ghazni from which they were shooting, some residents said, speaking on condition of anonymity for fear for their safety.

An Afghan military helicopter crash landed in the city during the daytime fighting, and four Afghan soldiers on board were injured, one critically, said Mohammad Radmanish, spokesman for the Ministry of Defense.

The Taliban claimed they had downed the "enemy" helicopter in Ghazni but Radmanish said it was not immediately clear if the helicopter had been hit or crash landed due to other reasons.

The brazen assaults by the Taliban, who have been gaining more ground in their annual spring offensive and who have shrugged off the government's latest offers of a cease-fire and negotiations, underscore the difficulties Afghan forces face in battling the relentless insurgency on their own in efforts to end the nearly 17-year war.

After repulsing the first assault, police conducted house-to-house searches for remaining Taliban fighters. Also, an investigation was underway to determine how the insurgents managed to infiltrate so deep into the city, barely 120 kilometers (75 miles) south of the Afghan capital of Kabul.

Hemat, the hospital administrator, said two wounded civilians were brought to the hospital. He was worried more wounded could be out there as the city was shut down and ambulances were not being sent out.

Mashal said there were more than 100 other casualties but he could not give a breakdown of the dead and wounded. Most of the casualties were Taliban, he said.

Lt. Col. Martin O'Donnell, a spokesman for U.S. forces in Afghanistan, said American forces and U.S. attack helicopters had assisted Afghan troops in pushing back the Taliban during the night's multiple attacks in Ghazni.

By midday Friday, O'Donnell said fighting continued inside Ghazni, prompting the U.S. forces to return American attack helicopters and fighter jets to the area after they were initially pulled back.

Taliban spokesman Zabihullah Mujahid claimed that parts of Ghazni had been seized and that Taliban fighters had killed scores of people. He also told the AP over the phone that Taliban anti-aircraft fire downed the Afghan army helicopter.

Mujahid did not comment on the Herat attack that killed six policemen at a district checkpoint.

After dawn Friday, Ghazni's residents were staying indoors and all shops in the city remained closed. The road from Kabul to Afghanistan's southern provinces was also closed because it runs through Ghazni.

The insurgents have stepped up attacks across the country since NATO and the United States formally ended their combat mission in 2014, and have seized control of several districts. U.S. and NATO forces remain in Afghanistan mainly in a supporting and training role.

Separately from the Taliban, an Islamic State affiliate has also carried out dozens of deadly attacks in recent years, mainly targeting security forces and minority Shiites.