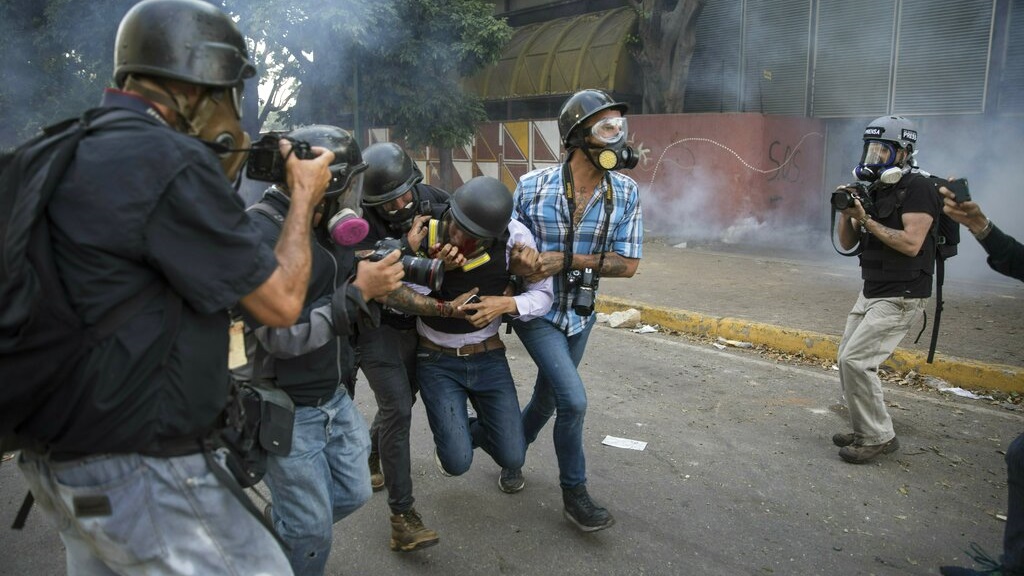 Journalists help reporter Gregory Jaimes, holding a VPITV microphone, who was injured while covering clashes between security forces and anti-government protesters in the Altamira neighborhood of Caracas, Venezuela, Wednesday, May 1, 2019. (AP Photo/Ariana Cubillos)

The UN Human Rights office voiced its concern in Geneva for protesters and journalists who have been injured or killed in Anti-government protests in Venezuela.

As thousands of Venezuelans took to the streets for May Day protests against the government of Nicolas Maduro, reports of casualties among the demonstrators were mounting, a spokesperson said Friday.

Ravina Shamdasani, speaking on behalf of UN Human Rights (OHCHR), told journalists that “in the past two days of demonstrations, five demonstrators have been killed by firearms.” Of these five, a 16-year-old and 23-year-old man who were killed on the 30th of April were killed by “pro-government armed individuals.”

OHCHR noted that there have also been “reports of attacks on journalists covering the demonstration.”

“We understand that at least ten journalists were injured on the 1st of May, including five who were wounded by buckshot,” Shamdasani told the press that the authorities of Venezuela had the “overarching duty to ensure the protection of the people of Venezuela, that no excessive force should be used.”

(Video: Journalist Gregory Jaimes is hit by pieces of mortar during clashes between Anti-Maduro protests and the military. Video recorded on May 1 around 5 pm in Avenida Juan Pablo Pernalete in Altamira, Caracas.)

Meanwhile, United Nations Secretary-General António Guterres said he was 'deeply troubled' by attacks on free press throughout the world.

In an address commemorating World Press Freedom Day on May 3, Guterres said facts, not falsehoods, should guide people during election time.

"A free press is essential for peace, justice, sustainable development and human rights. No democracy is complete without access to transparent and reliable information. It is the cornerstone for building fair and impartial institutions, holding leaders accountable and speaking truth to power."

"This is especially true during election seasons -- the focus of this year’s World Press Freedom Day."

"Facts, not falsehoods, should guide people as they choose their representatives."

"Yet while technology has transformed the ways in which we receive and share information, sometimes it is used to mislead public opinion or to fuel violence and hatred."

"Civic space has been shrinking worldwide at an alarming rate. And with anti-media rhetoric on the rise, so too are violence and harassment against journalists, including women.

"I am deeply troubled by the growing number of attacks and the culture of impunity. According to UNESCO, almost 100 journalists were killed in 2018. Hundreds are imprisoned. When media workers are targeted, societies as a whole pay a price."

"On World Press Freedom Day, I call on all to defend the rights of journalists, whose efforts help us to build a better world for all," he said.