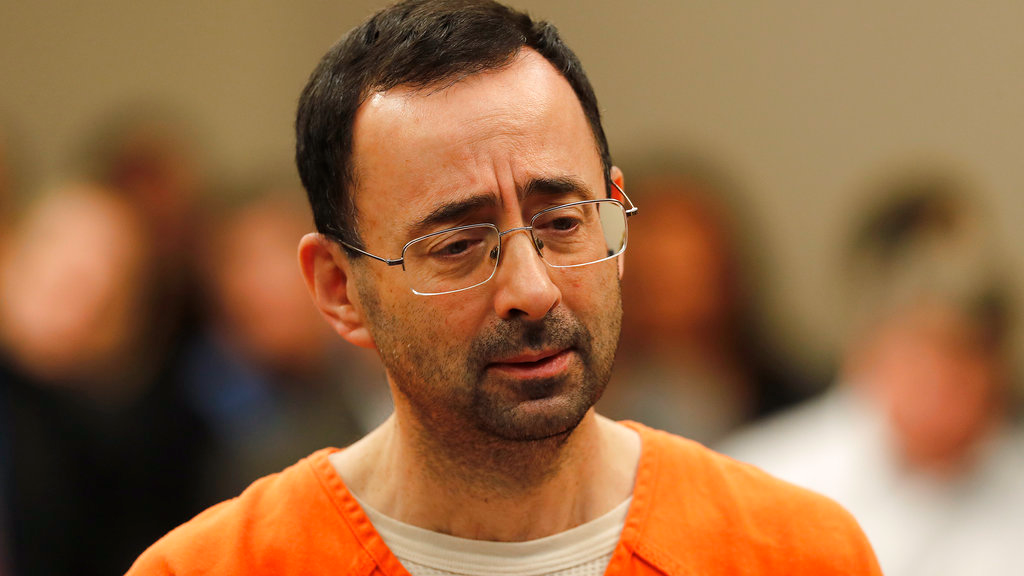 A former sports doctor accused of molesting at least 125 girls and young women while he worked for USA Gymnastics and Michigan State University pleaded guilty Wednesday to multiple charges of sexual assault and will face at least 25 years in prison.

Larry Nassar, 54, admitted to digitally penetrating seven girls, mostly under the guise of treatment at his Lansing-area home and a campus clinic, between 1998 and 2015.

"For all those involved ... I'm so horribly sorry that this was like a match that turned into a forest fire out of control," he said in a courtroom packed with tearful accusers and others. "I pray the rosary every day for forgiveness. I want them to heal. I want the community to heal."

Nassar, who lost his physician's license in April, admitted his conduct had no legitimate medical purpose and that he did not have the girls' consent. The 125 girls and young women who have filed reports of abuse with campus police will be able to speak at his Jan. 12 sentencing.

The plea deal in Ingham County calls for a minimum prison sentence of 25 years, but the judge could set the minimum sentence as high as 40 years. Nassar is expected to also plead guilty Nov. 29 in neighboring Eaton County — the location of an elite gymnastics club — resolving state prosecutors' charges against him. Separately, he is scheduled to be sentenced next month in federal court for possessing child pornography.

Olympic gymnasts Aly Raisman, McKayla Maroney and Gabby Douglas are among the women who have publicly said they were among Nassar's victims.

"You used your position of trust ... in the most vile way to abuse children," Judge Rosemarie Aquilina told Nassar after his plea. "I agree that now is a time of healing, but it may take them a lifetime of healing while you spend your lifetime behind bars thinking about what you did in taking away their childhood."

She called the victims "superheroes for all of America, because this is an epidemic."

They had testified that Nassar molested them with his hands, sometimes when a parent was present in the room, while they sought help for gymnastics injuries. Several accusers were angry with his apology.

"The fact that he just thinks, 'Oh, I pleaded guilty and now you guys can start healing' is ridiculous to me. I don't think he truly understands how many people are hurting and how bad people are hurting over this," said Lindsey Lemke, a Michigan State gymnast.

The criminal cases against Nassar followed reports last year in The Indianapolis Star about how USA Gymnastics, which trains Olympians, mishandled complaints about sexual misconduct involving the doctor and coaches. Women and girls said the stories inspired them to step forward with detailed allegations of abuse.

Many of the accusers have sued Michigan State, USA Gymnastics and the U.S. Olympic Committee.

"We are more than a year from my police report. Our abuser has pled guilty, but MSU, USAG and the USOC, you have yet to take responsibility for what happened on your watch," said victim Rachael Denhollander. She said officials kept Nassar in power for decades after ignoring repeated reports of sexual assaults and brushing off the victims as being unable to tell the difference between a medical exam and a sexual violation.

John Manly, an attorney for 105 accusers, said the three institutions "miserably failed children," and he likened what happened with Nassar to the child sex abuse scandal at Penn State University. He criticized an internal review at Michigan State and called for an investigation of university officials by Michigan Attorney General Bill Schuette, whose office is prosecuting Nassar.

Women's gymnastics coach Kathie Klages resigned earlier this year, but others remain on the job.

"We've never been given the documents either in litigation or anywhere else to show who knew what when," said Manly, who added that Michigan State President Lou Anna Simon should resign if she does not release an internal report about the scandal.

USA Gymnastics said in a statement that it was "very sorry that any athlete was harmed by Larry Nassar" and that it fired Nassar and reported him to the FBI after first learning of concerns in 2015. Manly said the organization never informed Michigan State, however, which had investigated a complaint in 2014 only to clear Nassar.

Michigan State spokesman Jason Cody said the university "unequivocally denies" accusations that it covered up misconduct by school administrators. He disclosed for the first time that university police and the FBI conducted a joint investigation earlier this year to determine if any school employees besides Nassar committed crimes.

The results were sent to the U.S. attorney for western Michigan, and "we have no reason to believe that any criminal conduct was found," Cody said in a statement.

"Michigan State University continues to be shocked and appalled by Larry Nassar's now-admitted criminal conduct," he said. "Any suggestion that the university covered up this conduct is simply false."

In a statement, U.S. Olympic Committee spokesperson Mark Jones said the organization is "disgusted that these acts occurred, heartbroken for the victims" and "proud of their courage for confronting this tragedy."