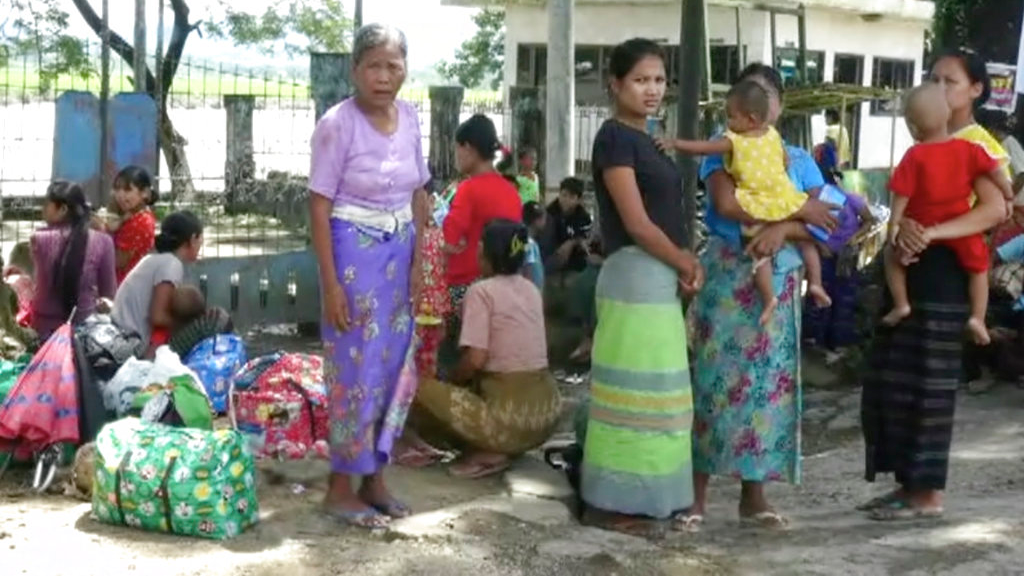 The announcement was the first by the government to list civilians among the dead — six people identified as Hindu said to have been killed by the insurgents.

Myanmar is overwhelmingly Buddhist, but about 1 million Rohingya live in the northern part of Rakhine, the western state where the violence is taking place.

Advocates for the Rohingya suggest many more civilians have died in army attacks on villages, but they have not given a total. They also say the attacks have caused villagers to flee to the mountains for shelter or to try to cross the border into Bangladesh.

Witnesses and refugees on the Bangladesh border said Sunday that the situation there was tense, with thousands of Rohingya trying to flee Myanmar but still unable to leave. Witnesses said they heard the sound of gunshots. Bangladeshi villagers said they could see military helicopters hovering in the Myanmar sky.

Several hundred Rohingya got stuck in a "no man's land" at one border point in Bangladesh's Bandarban district, barred from moving farther by Bangladeshi border guards. Lt. Col. Manzurul Hasan Khan of Border Guards Bangladesh said they cordoned off about 1,000 Rohingya after they attempted to enter Bangladesh.

A Rohingya insurgent group, the Arakan Rohingya Salvation Army, or ARSA, took responsibility for Thursday night's attacks on more than 25 locations, saying they were in defense of Rohingya communities that had been brutalized by government forces.

Clashes were continuing on Sunday, with witnesses contacted by phone in the northern Rakhine town of Maungdaw saying they could hear gunshots.

Independent confirmation of the situation is difficult because the government bars journalists from the area.

Suu Kyi's office issued an official warning to media on Sunday, saying "some media" have been referring to the group as "insurgents" instead of "terrorists." On Friday, the government declared ARSA a terrorist organization, which means most contacts with it are illegal. Sunday's announcement specifically said "we warn the media to avoid writing in support of the group."

The government refuses to recognize Rohingya as a legitimate native ethnic minority, calling them Bengalis to reflect the position that they are mostly illegal immigrants from neighboring Bangladesh. Most Rohingya are denied citizenship and its rights.

The Rohingya have long faced severe discrimination and were the targets of violence in 2012 that killed hundreds and drove about 140,000 people — predominantly Rohingya — from their homes to camps for the internally displaced, where most remain.

Suu Kyi has called Thursday's attacks "a calculated attempt to undermine the efforts of those seeking to build peace and harmony in Rakhine state." The attacks were also generally condemned by Western nations and rights groups, who also warned the government against violent retaliation.

The clashes were deadlier than an attack by the militants on three border posts last October that killed nine policemen and set off months of brutal counterinsurgency operations by Myanmar security forces against Rohingya communities in Rakhine state.

Human rights groups accused the army of carrying out massive human rights abuses, including killing, rape and burning down more than 1,000 homes and other buildings.

The army's abuses fueled further resentment toward the government among the Muslim Rohingya. ARSA took advantage of the resentment by stepping up recruitment of members.