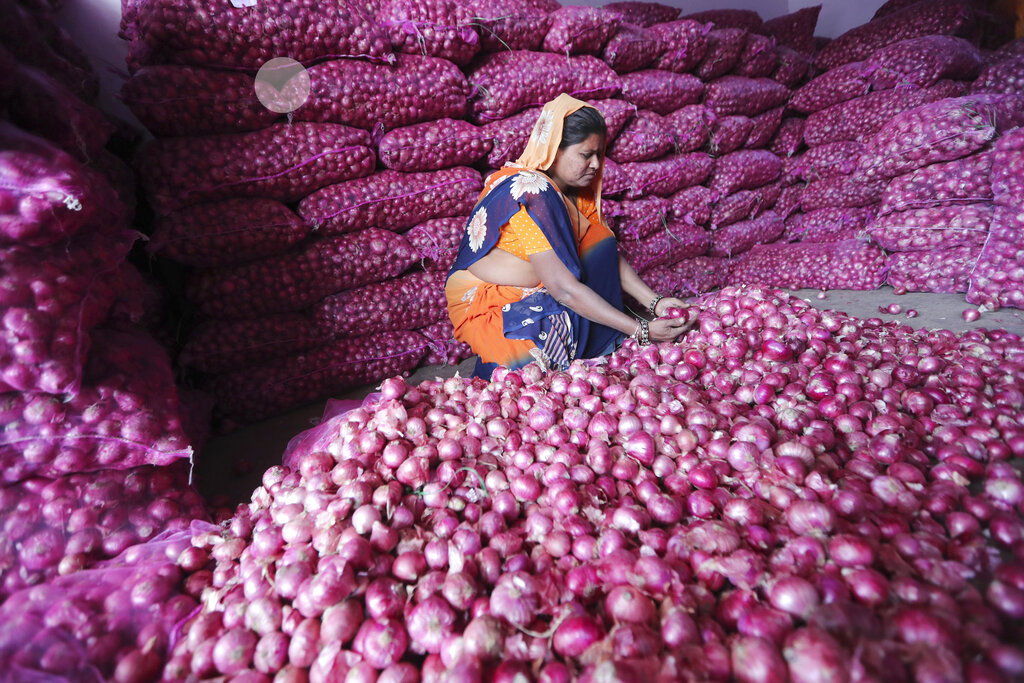 Onion prices are seen by some as a key indicator of economic stability in India, and opposition parties, quick to smell an opportunity, have rallied in the streets wearing onion garlands and offering onions as wedding gifts. (AP Photo)

With crops ruined by a combination of drought and rot, the price of onions has skyrocketed in India and added to worries over food inflation at a time when the slowing economy has become a liability for the government.

The price of onions, a staple now too expensive for most Indian families, is seen by some economists as a key indicator of economic stability and opposition parties have seized on the issue by wearing onion garlands at street rallies and offering onions instead of gold as wedding gifts.

“The common man doesn’t understand bigger economic issues. But the onion prices will make him think twice before trusting a government,” said Karthik Ganguly, a political analyst and a professor of economics at Delhi University. “The soaring onion prices can put the government in a fix.”

The onion crisis is piling pressure on Prime Minister Narendra Modi, who is already dealing with large-scale protests against a new citizenship law that has raised concerns about his party's Hindu nationalist agenda and further alienated the country's 200 million Muslims. 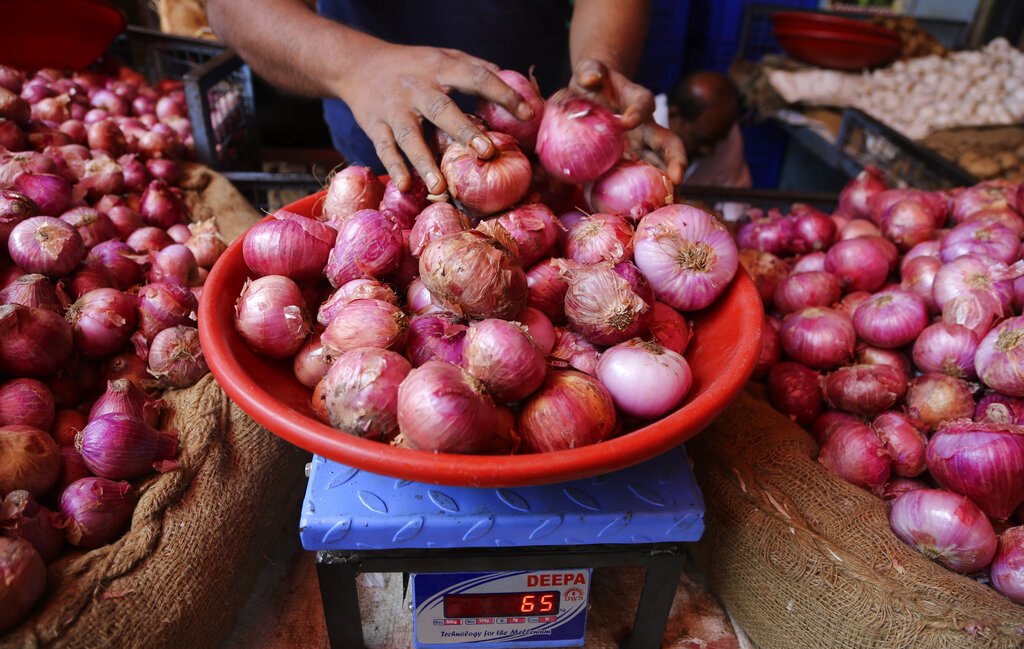 In this Tuesday, December 3, 2019, photo, a vendor weighs onions for a customer at a farmers market in Bangalore, India. (AP Photo)

Onion prices in some Indian cities have tripled to 200 rupees ($2.79) per kilogram ($1.25 per pound) over the past month after untimely rains caused crops to fail. The government has attempted to deal with the problem by selling onions at a subsidized price in some states, halting exports and cracking down on hoarders. It also plans to import onions from Turkey and Egypt, but those shipments won't arrive until January.

Finance Minister Sitharaman answered questions in Parliament about soaring onion prices by saying she doesn’t “eat much onion and garlic.”

"I come from a family that doesn't have much to do with onions," Sitharaman said.

The remark was seen by many Indians as tone deaf and a sign that the government isn't taking the issue seriously.

“This tells us how the government thinks about the very basic problems faced by the common people. They don't care,” said Shalini Mehta, a teacher.

The onion crisis is adding to existing economic concerns. India's economy expanded 4.5% in the July-September quarter, its slowest rate in six quarters. Retail inflation has also been rising, touching a three year high of 5.54% in November. The slowdown follows several major shocks brought on by Modi's government, including a massive demonetization meant to counter widespread tax evasion and corruption and the introduction of a goods and services tax.

"An average middle-class Indian is now thinking twice before buying onions,” said Sushil Kumar Jain, who heads the New Delhi wing of Confederation of All India Traders, a body of small traders and businesses. 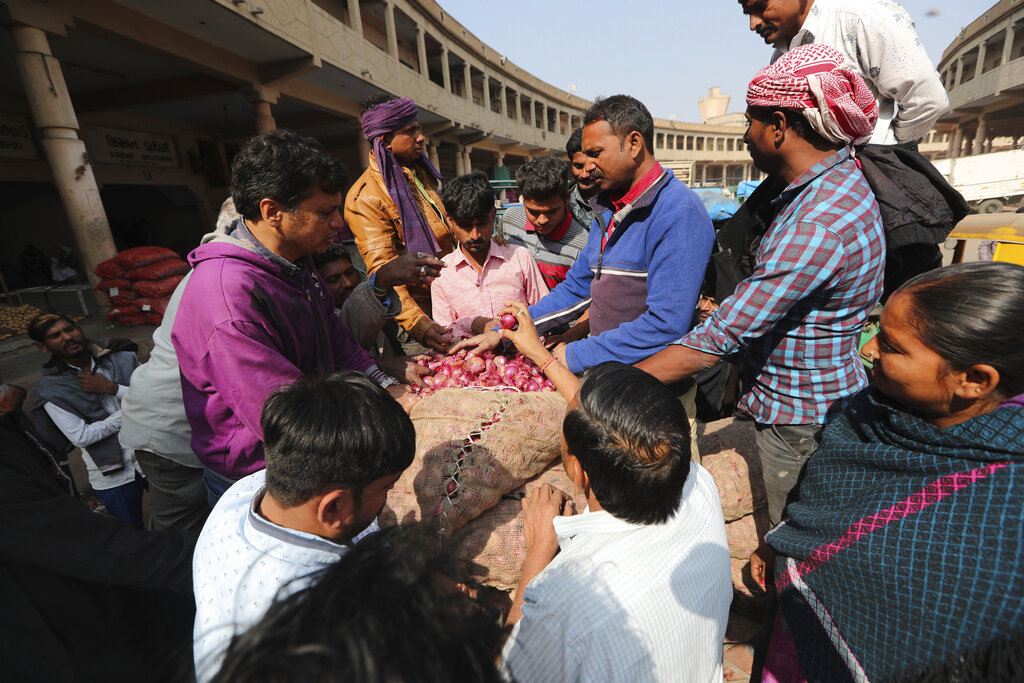 Indian trader take part in an auction of onions at a market in Ahmadabad, India. Soaring prices has put the humble onion, a staple for most Indian families, out of reach. (AP Photo)

On a recent morning, in the southern India city of Bangalore, only a handful of vendors sold onions at a farmers market bustling with hundreds of people. Many vendors have given up on selling onions due to the prices, and those still selling them rue their meager profits.

Shankar Burman, a construction worker who lives with 10 other people, said the rising price of onions was putting a strain on what he could buy for their joint kitchen.

Out in the countryside, farmers are also struggling.

Sudesh Patil, a farmer in Maharashtra state, had to plant three times due to excess rains, adding to his costs.

“Whatever onions my farm produced were stored in warehouses and they rotted because of flooding,” said Patil.

Mahtab Wali, a restaurant manager in New Delhi, said his chefs have cut back on the amount of onion they use in their famous Mughal dishes.

“The onion," he said, "has now become a rare precious stone inside our kitchen.”