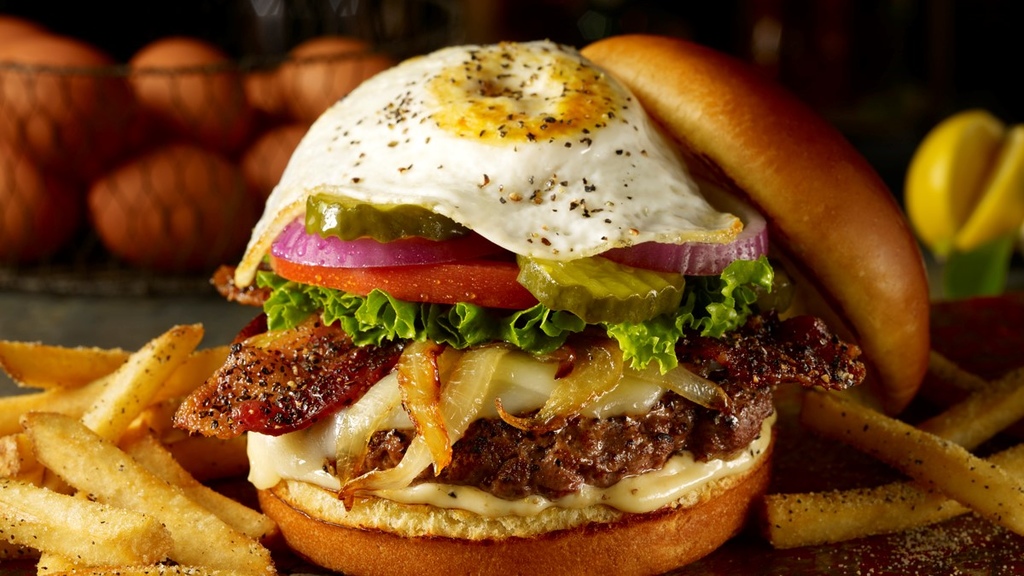 A Hangover Burger from TGI Fridays.

The restaurant franchise, owned locally by Prestige Holdings, has joined many others in ramping up its digital platforms due to COVID-19 policies which currently restricts in-house dining across Trinidad and Tobago.

Singh said the restaurant implemented protocols early on, marrying Government protocols with that of their international parent and Prestige Holdings.

“We were recognised internationally in the September newsletter for the way we implemented the protocols,” she said. 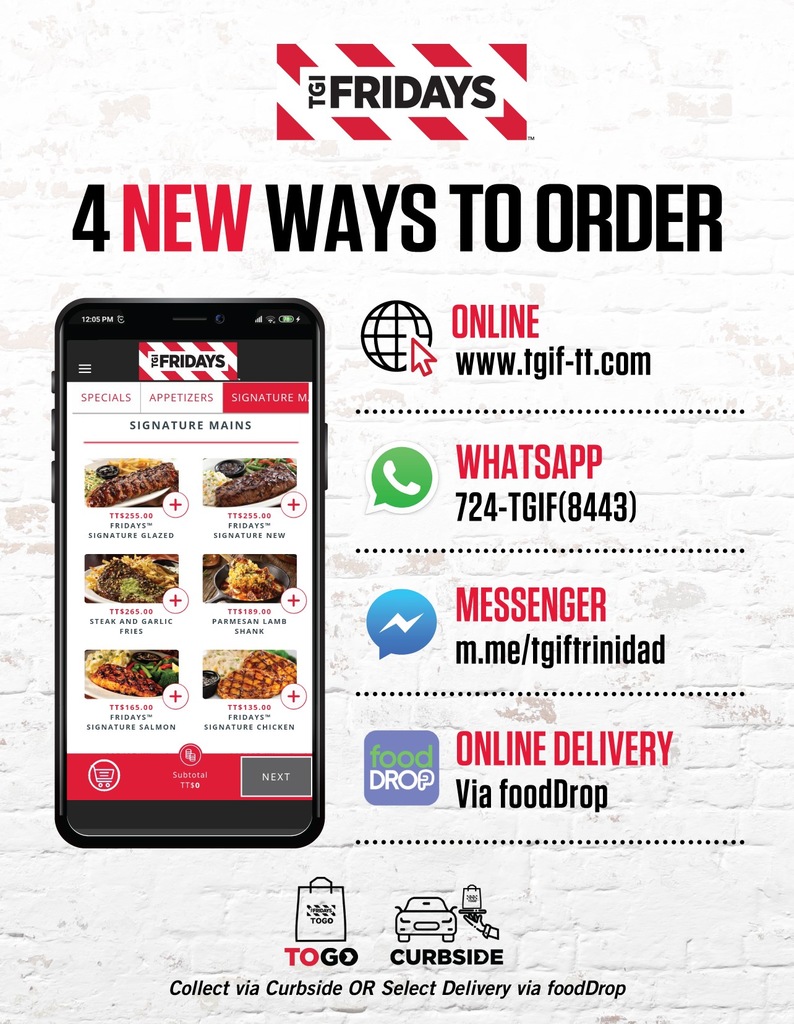 With the second closure of restaurants, TGI Fridays had to supplement the loss of its in-dining revenue which was already reduced since the restaurant was operating at a 40 percent capacity due to social distancing guidelines.

The digital plans that the company had projected for the future was pulled up.

The existing website was enhanced, said Singh, with a platform to facilitate online orders as well as orders via Messenger and Whatsapp.

Even though delivery was implemented prior to COVID-19, a lack of delivery drivers hampered the efficiency of the service so TGI Fridays engaged the services of Food Drop which, Singh said, allows them to expand their footprint. 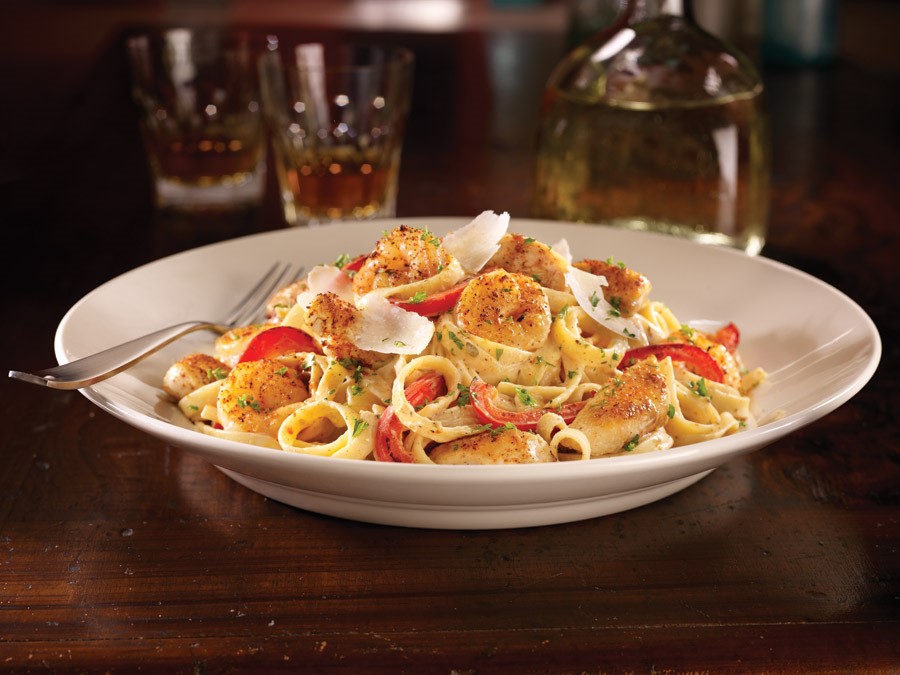 Delivery is available from all TGI Fridays restaurants within Food Drop’s radius limit.

Delivery services began on July 13 with online ordering launching on August 23. Despite the soft launch of both services, Singh said they have found favour with the public.

“We have had some transition for online orders where people would just place their orders online instead of calling the restaurant…we were so surprised cause we were still testing the programme, making sure prices were right and the process seamless and lo and behold people started ordering,” she said.

She said a soft launch was done to give the staff time to adjust.

With the new norm, the staff had to be retrained since they were trained to deal with customers in-house.

An important aspect of the retraining was to retain the hospitality TGI Fridays is known for. 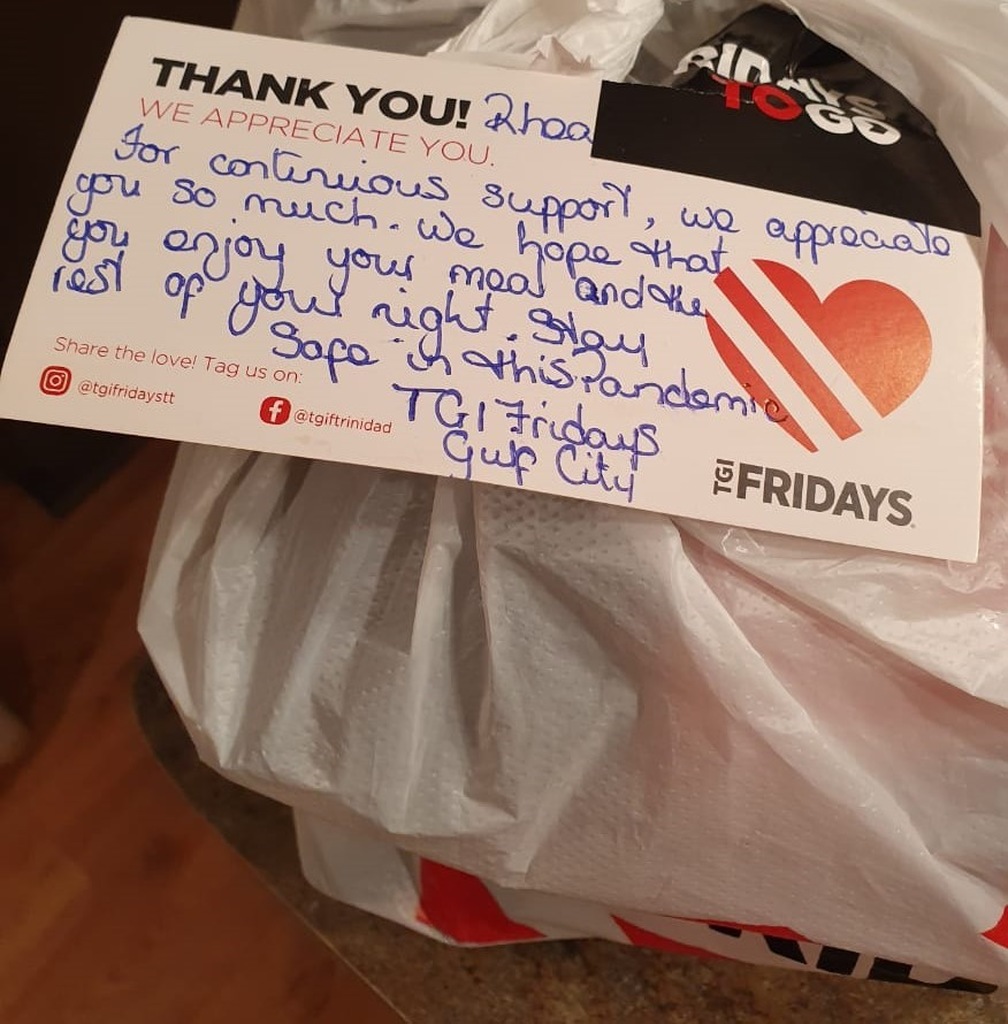 Thank you notes are sent with orders

“Guests were missing that component, so after delivery our managers call guests to find out about the service and what we could do differently. For online orders, we have the team call the guests to confirm the order, we really want to personalise it. We write personal messages on all of our orders,” said Singh.

She noted that their popular birthday favour such as a complimentary ice cream may only be given if the person lives in close proximity or goes to the restaurant to ensure the ice cream does not melt.

To make their operation more efficient, TGI Fridays has reduced the menu offering to the top 25 popular dishes and drinks.  The restaurant is only selling non-alcoholic drinks and mocktails (non-alcoholic cocktails) at this time.

Asked about prices, Singh said before COVID-19, they had already revamped the menu to cater for different pockets with three-course meals for as low as $199. For Restaurant Week there is a special for $200 comprisng a starter, entree, dessert and a mocktail.

Looking to the future, Singh said the new initiatives and others such as using QR codes for patrons to access the menu, will remain a feature for the restaurant and they will continue to monitor the digital platforms to see what could be added.

Singh said: “We will be looking at how we can expand from a digital standpoint. This will really be the start for us so it will be exciting.”