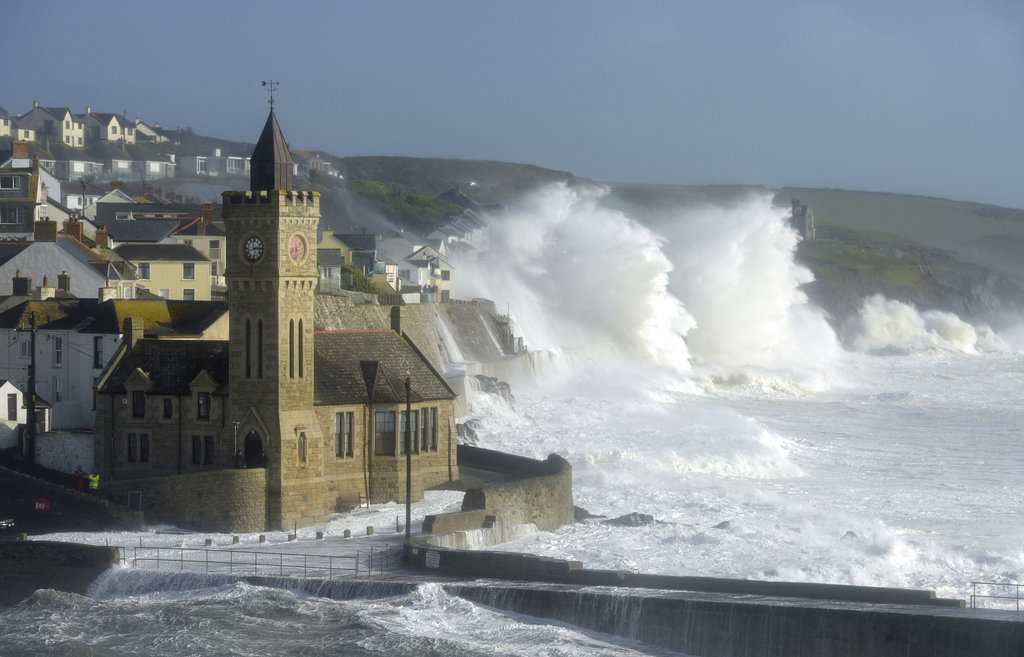 Waves break around the church in the harbour at Porthleven, Cornwall southwestern England, as the remnants of Hurricane Ophelia begins to hit parts of Britain and Ireland. Ireland's meteorological service is predicting wind gusts of 120 kph to 150 kph (75 mph to 93 mph), sparking fears of travel chaos. Some flights have been cancelled, and aviation officials are warning travelers to check the latest information before going to the airport Monday. (Ben Birchall/PA via AP)

Storm Ophelia is battering Scotland and northern England after leaving three people dead and hundreds of thousands without power in Ireland.

Schools in Northern Ireland and the Republic of Ireland were closed for a second day as authorities assessed the damage from the worst storm to hit Ireland in decades.

Irish authorities said it could take several days to restore power to 330,000 homes.

Train services between the Scottish cities of Glasgow and Edinburgh, and from London to Aberdeen, Dundee and Perth were slowed down by trees that were blown onto the tracks.

In Dumfries and Galloway in western Scotland, a scout hall roof was blown off amid winds of up of up to 77 mph (124 kph). In Cumbria in northwest England, part of a soccer club's stand was ripped off by the wind.

Some areas hit by the storm were affected by water shortages.

By Tuesday, the UK Met Office reduced the area covered by a yellow weather warning, though it said windy weather is still likely.

Parts of southern Norway reported a smoky smell on Tuesday morning, which the local meteorological institute said it was likely carried there by Ophelia from the wave of forest fires in Portugal and Spain that killed at least 41 people over the weekend.

In Sweden, people in the capital of Stockholm and elsewhere launched a flurry of calls to authorities, saying the skies were much darker than usual Tuesday morning. That was also probably due to Ophelia's strong winds, which carried a mix of red sand from the Sahara and tiny particles from the Iberian forest fires across western Europe.