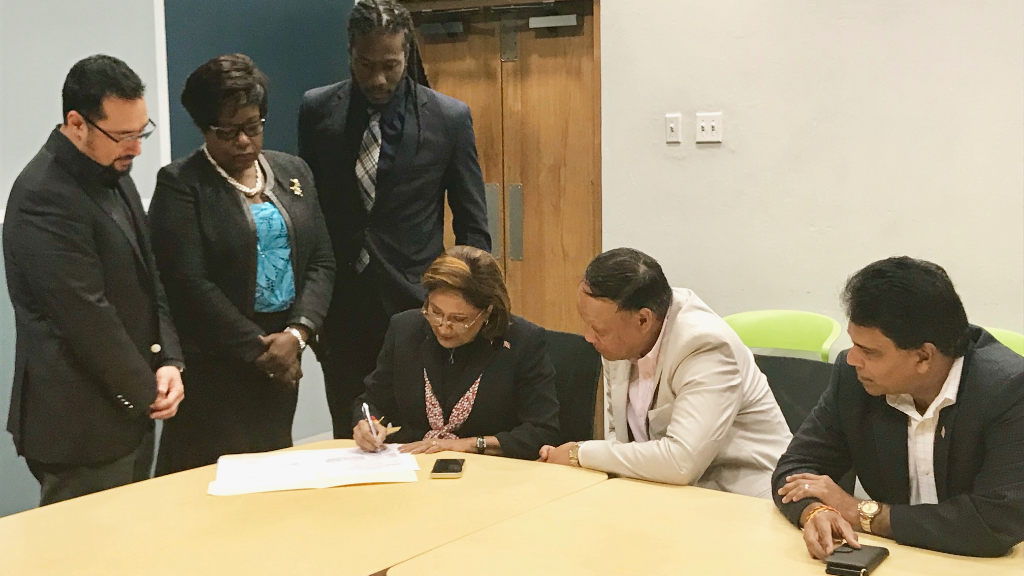 Trinidad and Tobago is well on its way to electing its first female President on January 19.

Opposition today announced its support of Government’s nominee to serve as the country’s next President – Madame Justice Paula Mae-Weekes.

The retired Justice of Appeal is the lone nominee for the presidency.

Speaking at a media conference Monday afternoon, Opposition Leader Kamla Persad-Bissessar said careful consideration was given to supporting Government’s proposal in the form of Weekes, and it was decided that it was time to elect a woman to the office of President, not because she is a woman, but because she is deserving of the office and suitably qualified.

The Opposition leader acknowledged concerns were raised over Weekes’ eligibility for nomination with regard to Madame Justice Weekes’ appointment as a judge of the Turks and Caicos Islands Court of Appeal, and her residency in Trinidad and Tobago.

She said that Government indicated in writing that it is satisfied that its nominee meets all the requirements under the Constitution.

She added that the decision to support Government’s nominee was taken in the interest of all citizens, to have a united view in the election of the country’s first female President.

Asked whether Opposition had a nominee in mind Persad-Bissessar said she would prefer “not to go into that discussion at this stage.”

She did not elaborate further as she declared Opposition’s endorsement of Weekes, which she said was based on Government’s provision of the nominee’s qualifications.

“I trust that Madam Justice Weekes will understand the faith that the country has placed in her by the collaborative support given for her election and that she will, in the discharge of her duties and responsibilities fulfill the expectations of all the people of this land, by virtue of her unwavering, uncompromising and impartial execution of those duties and responsibilities.”

Persad-Bissessar explained that once the nomination is not opposed, a vote will not be taken. The President will then be declared as duly elected by the Electoral College.

“I would say as of now, Madam Justice Paula Mae-Weekes is the President-designate of Trinidad and Tobago.”

The Speaker of the House has already received the nomination paper for the lone candidate for election to the office of President on the prescribed form.