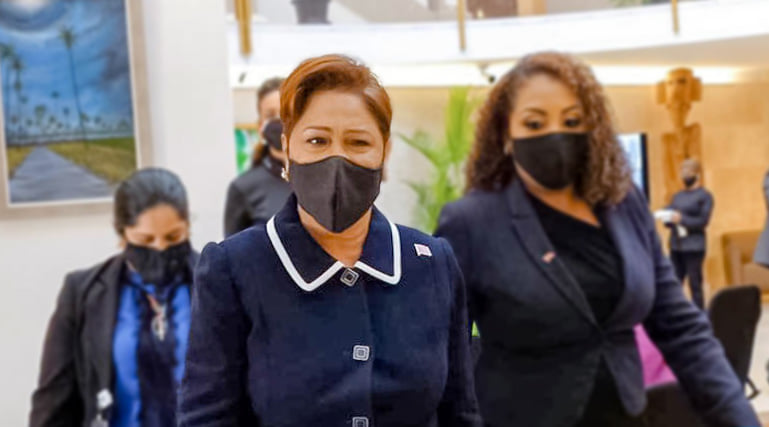 Opposition Leader Kamla Persad-Bissessar responded to the lifting of some COVID-19 public health restrictions with the view that government's response is 'confused'.

In a statement today, Persad-Bissessar said Prime Minister Dr Keith Rowley's comments on government's response is different from the reality:

'After the Prime Minister addressed the nation today from his home in Tobago, one would notice that the picture he has painted of his government's response to COVID-19 is not the reality of what the population is facing on the ground.'

'He boasted about a parallel health system while citizens were left to battle under a tent at Mt Hope. If you were to visit any of our major hospitals, you will see the true state of our healthcare system that has been overwhelmed for months.

'Citizens have had to wait weeks for their COVID test results, and some citizens, unfortunately, lost their lives waiting for these test results before they could have accessed any relevant medical treatment.'

Persad-Bissessar added that there was no comment on suffering businesses:

'Keith Rowley once again sought to distract the nation rather than offering any new solutions or support for the thousands of businesses that are in distress. His “apology” for the suffering citizens have endured accompanied by the absence of government support is synonymous with his regime's continued lip service to everyone throughout this pandemic.'

'We again heard nothing of the promised rapid test kits, and his only solution was to reopen a few businesses.'

'Furthermore, his only plan for the thousands of nationals stranded abroad is to create yet another Ministerial committee to now “remove the exemption system”. It is clear the Prime Minister and his Government remains clueless about the pandemic and the struggles the people continue to face.'

'We again call on the Government to show more compassion to our stranded nationals abroad, as well as increased support for businesses and citizens that continue to suffer.'

During a media briefing yesterday, Dr Rowley announced that restrictions would be lifted on churches, gyms, beaches, cinemas and casinos, allowing these establishments to operate at half capacity with the requisite adherence to health and safety precautions.

Churches and other places of worship will be allowed to have services for up to one hour; while workers from the public sector would be allowed to physically return to work.

However, no dining in would be allowed at cinemas, casinos or members' clubs.

Dr Rowley added that a committee will be established to look at the removal of the exemption system used for the repatriation of nationals.