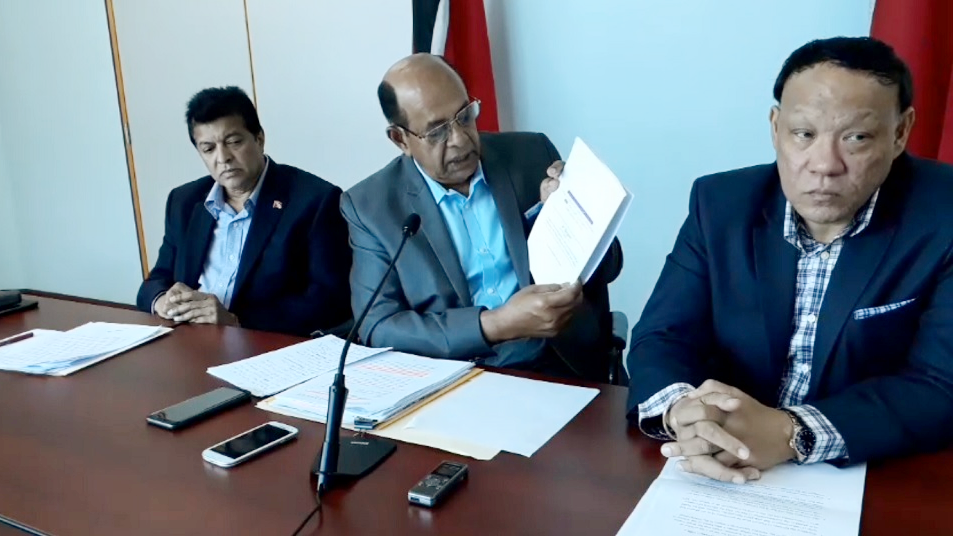 Opposition MPs Dr Tim Gopeesingh, David Lee and Lackram Bodoe said the country is descending into a health crisis and asked whether there is a policy of victimisation being used within the Health Ministry against local doctors and nurses.

In a media briefing on Sunday, the Dr Gopeesingh said there was a 'deliberate Government policy of underemployment of local doctors and nurses in the public health sector' which is 'seriously compromising the health of citizens'.

Dr Gopeesingh and Bodoe called on Prime Minister Dr Keith Rowley to explain the reason for allowing a health crisis to increase.

“The question we are asking and the question the people of Trinidad and Tobago are asking is why is this Rowley-led government not employing doctors when there are hundreds of vacancies in all health institutions,” he said.

Dr Gopeesingh pointed to recent media reports that cite that in the past two years especially, some 680 local graduating doctors in Trinidad, Grenada, Barbados and Jamaica, as well as hundreds of graduating nurses, have been unable to find jobs in the public hospitals and health centres despite massive numbers of vacancies waiting to be filled.

Dr Gopeesingh said this was seriously threatening the health and well-being of hundreds of thousands of citizens who rely on the public health sector.

“These doctors would have spent more than six years of training,” Dr Gopeesingh said, noting that many were the recipients of National State Scholarships which are funded by taxpayer’s dollars, to the tune of hundreds of millions of dollars.

“That now stands to go to waste,” Dr Gopeesingh said, pointing out that if, after two years, the State cannot find jobs for National Scholarship winners so they fulfil their obligation of working in the system to repay the debt, “they are free to seek jobs elsewhere.”

He noted that the reports cite that many of these doctors are now living in “hopelessness and despair” and are seeking employment outside Trinidad and Tobago out of sheer desperation.

Dr Gopeesingh citied a JSC Report on the Registration and Licensing of Medical Doctors in TT (dated 2016/2017) which notes that currently, there are 1,840 non-nationals practising as doctors in the public health institutions while there are 3,755 national doctors.

Noting that locally trained doctors are among the best trained in the world since the UWI is an internationally respected academic institution for the past 70 years and its Medical School, since 1988, he questioned why the non-nationals are given preferential treatment over the local doctors.

“We are grateful for the work they have done in the hospitals but now there are enough local doctors to fill the gap.”

Dr Gopeesingh: Over 1,000 vacancies for nurses

He said the same crucial issue exists in the nursing profession since there are currently 1,065 vacancies for nurses in the hospitals, a fact that the Prime Minister has been aware of personally since he met with the Nursing Representatives in June this year.

He also accused government of deliberately stopping local training for nurses and hiring foreign nurses to fill the vacancies.

“They say they are hiring foreign nurses because local nurses are not trained but if you do not employ the nurses to start with how can they continue to train to become specialists?” he asked.

Dr Gopeesingh said this lack of hiring young doctors and nurses is also seriously jeopardising the quality of patient care for future generations since it is preventing them from the much-needed opportunity to train in the practices by seniors in the profession.

“The medical practice is called a practice because young doctors train with seniors and master their fields and specialists fields. This policy of discrimination is jeopardising training in the hospitals. We will find ourselves in four to five years with a massive shortage of trained doctors to care for patients,” he warned.

He also slammed Health Minister Dr Terrence Deyalsingh, saying when MPs sought clarification on the matter Deyalsingh consistently engages in “filibustering and referred the questions to his ‘team.’”

“So we have to ask: Is this a deliberate policy of suffering young doctors, spite, political vindictiveness and viciousness (aimed at fostering) the unemployment of these young doctors. Three years ago the figure was 160 unemployed doctors, now, in 2018, it is more than 650,” Dr Gopeesingh said.

Dr Gopeesingh said the situation at hospitals is now so bad, one can go in for a simple ailment and 'end up dead':

“When you believe that you are punishing doctors and their families, you are in fact spitting on the population, since the level of health care in the public hospitals is deteriorating rapidly under the PNM Government.”

“The hospitals are becoming killing fields—people are going in with small ailments and end up dead due to lack of proper qualified and effective treatment,” he said.

He claimed there are no CDAP drugs in the hospitals and no anti-cancer drugs, resulting in high-risk health issues.

Dr Gopeesingh also noted that there are currently no lab testing facilities at the public hospitals for suspected heart attack on patients, so their families are thus sent to take them to private medical labs for these required tests, and often, by the time they get the results, patients end up dead due to the long wait and lack of treatment.

He said there are also delays for crucial surgeries and this leads to worsening conditions in patients suffering from chronic health diseases such as diabetes and hypertension, resulting in increasing renal failure cases.

“Not everybody can afford US$1.2 million to go to Washington to take care of their strokes or to go to California for check-ups,” Dr Gopeesingh said.

He also noted that the Deyalsingh-led Ministry of Health is deliberately refusing to act on recommendations to improve the system as laid out in the 3rd and 4th Joint Select Committee Reports (2016/2017) and the recent issue of the RHA's termination of the contract of a particular Medical Specialist by an 'invisible hand', is shrouded in political bias and deliberate political interference and victimisation.

“The Minister of Health is guilty of gross incompetence due to the number of people dying from lack of care in the hospital; this situation is shameful and disgraceful."

“The Rowley Government has to answer as to why it is continuing to suffer the citizens and sick people. They are in violation of the Constitutional rights of citizens who are entitled to proper health care in the public hospitals,” Dr Gopeesingh said.