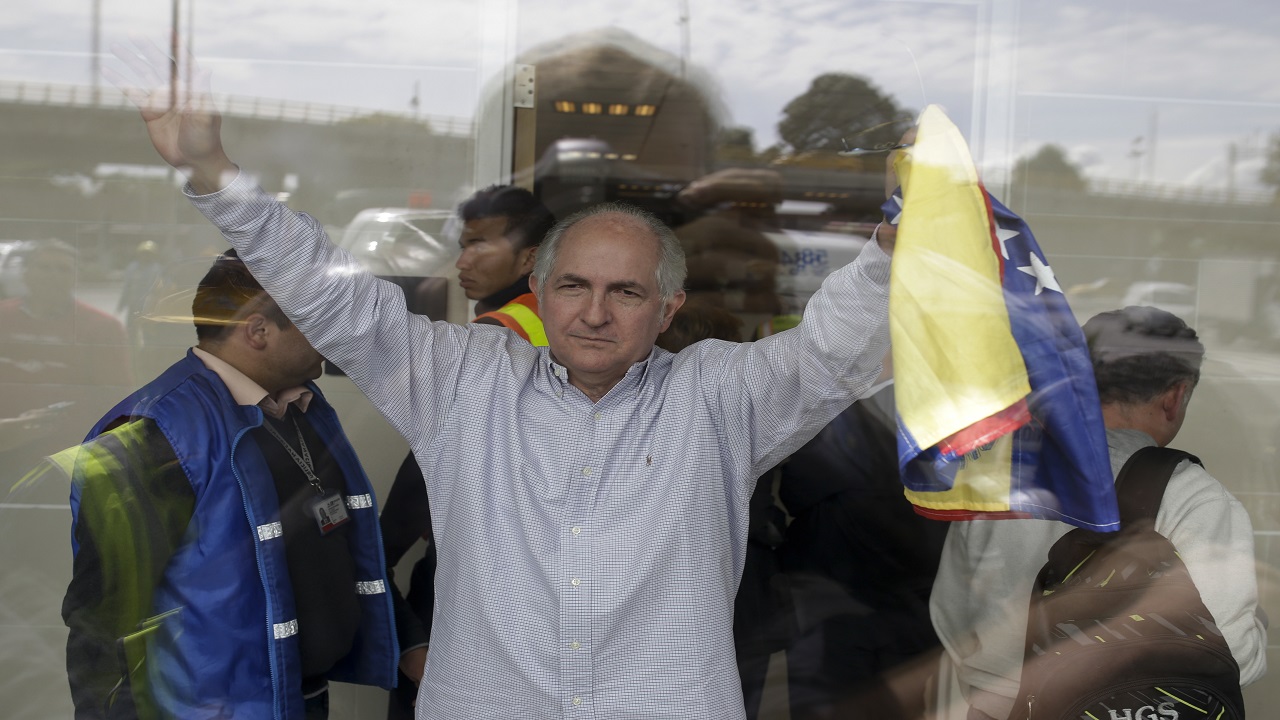 The ousted mayor of Caracas pledged to spread his protest against Venezuela's socialist government across the world as he arrived in Spain on Saturday, a day after escaping from house arrest and slipping past Venezuelan security forces into Colombia.

Antonio Ledezma's flight from Bogota landed at Barajas airport in Spain's capital, Madrid. With a Venezuelan flag draped over his shoulder, he hugged his wife and two daughters and said he would fight Venezuelan President Nicolas Maduro from exile

"I am going to dedicate myself to traveling the world, to spread the hope of all Venezuelans to escape this regime, this dictatorship," Ledezma said. "Venezuela isn't on the verge of an abyss, it has fallen into the abyss."

Maduro, for his part, called Ledezma a "vampire flying around the world."

Ledezma started his global tour by meeting Saturday with Spanish Prime Minister Mariano Rajoy at the presidential palace hours after his arrival. Neither politician spoke publicly after the meeting. Ledezma has not said what other countries he plans to visit.

Ledezma, 62, was removed as mayor of Caracas and detained in 2015 on charges of plotting to oust Maduro. He was one of the leaders of anti-government protests that rocked Venezuela in 2014 and led to the jailing of other prominent opponents.

Besides his family, he was greeted in Madrid by the former president of Colombia, Andres Pastrana, and the former Venezuelan ambassador, Fernando Gerbasi.

"Venezuela is completely collapsing. We can't wait any longer," Ledezma said. "We don't have any resources left, only our morale."

Ledezma told The Associated Press on Friday that his decision to flee was driven by threats intended to force the opposition to resume negotiations with Maduro's government. Fellow opposition leader and former cellmate Leopoldo Lopez remains under house arrest in Venezuela.

After slipping past intelligence police officers stationed outside his residence 24 hours a day, he passed through several police checkpoints in a long journey by car to Colombia. Colombian immigration authorities said Ledezma entered the country legally across the Simon Bolivar Bridge.

Ledezma, who thanked both Spanish and Colombian authorities for what he described as their warm welcomes, was elated after his escape.

"I've lived out a James Bond movie," he said. "I made this route of more than 24 hours, passing 29 control points, checkpoints, crossing paths, accepting all the risks, and in every moment I always thought about the value of freedom."

US hits Venezuelans with sanctions in response to crackdown