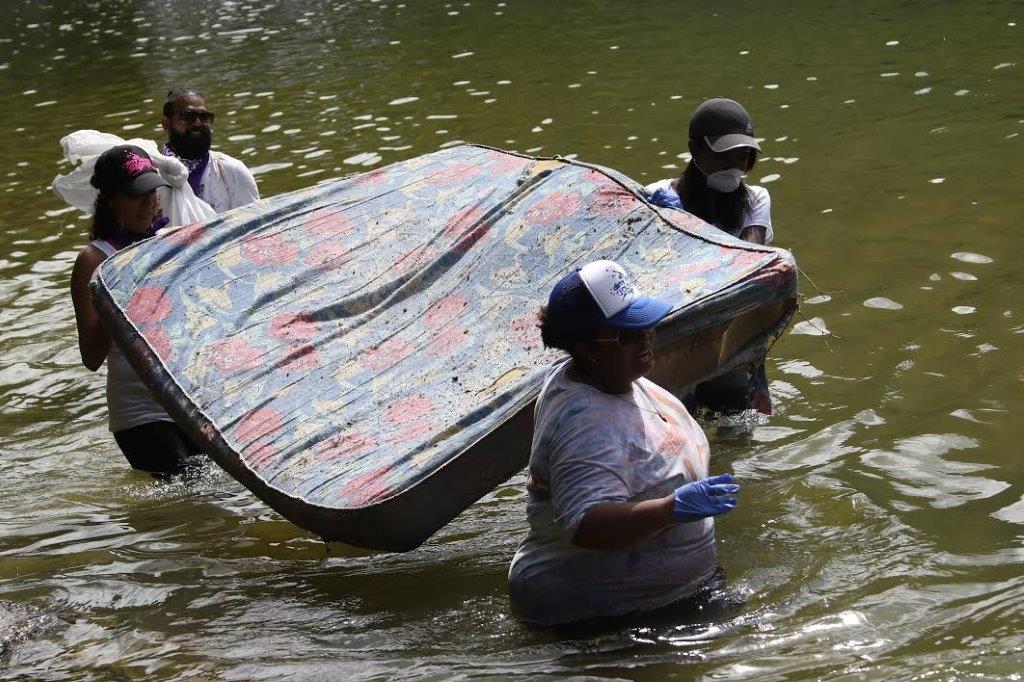 A Queen-sized mattress, a tent, an inflatable kiddie pool and several rugs.

These are some of the items, along with over 4,000 pounds of garbage that were found and removed from popular beach and camping site, Scotland Bay. The activity was a part of the during the 2017 edition of ‘Beach Clean pUmP’ on September 16, also known as International Coastal Cleanup Day.

Held annually by the Green Circle (theGC) since 2015, the exercise saw a group of over 300 people from different walks of life mobilize together to clean up the litter-filled beach.

The Green Circle’s Scotland Bay Cleanup, one of 25 cleanups which took place across T&T, joined thousands of groups and millions of volunteers around the globe who, annually on the third Saturday in September, take to waterways and coasts to clean.

For the past three years, Green Circle founder Kerrie-Kim Kirton has conducted the Beach Clean pUmP, an activity which marries a good cause with a true Trini lime aka ‘pump’.

Kerrie explained, “I saw the need for a change in our society. The need to bring awareness to T&T, and particularly, my peers, about the harm we cause when we don’t dispose of our waste properly. In 2015, I invited and challenged groups of friends – entities like Scorch, Caesar’s Army and TRIBE – to make a difference. As movers and shakers in the field of entertainment, who better to show T&T that while we like to have fun, the youth can act responsibly too? Who better to set an example?”

“That year, we sailed to Scotland Bay with 70 persons from seven crews, including TRIBE and webetheFUN. Fourteen hundred pounds of trash was removed from the beach,” he added.

“Unfortunately, the amount of trash left behind by visitors to Scotland Bay keeps rising. This year, we collected over 4,000 pounds of waste,” Kerrie lamented.

The Green Circle head expressed great disappointment in the scant regard for the environment so vividly showcased by the amount and types of garbage collected at the site. “I am truly saddened. Although I was able to double the number of volunteers that came out to clean up in 2016, we almost doubled the amount of garbage collected in 2016 as well. Last year, we removed a toilet bowl from the Scotland Bay site and this year, while I’d hoped we would make no such discoveries, we found a Queen-sized mattress. We, the people of T&T, need to do more to reduce the amount of waste that we produce and especially, reduce the improper disposal of this waste. Our future depends on it” he warned.

Kerrie expressed gratitude to the 29 crews that participated in the Beach Clean pUmP 2017. Each crew got to the Harbour Master boat dock for 6 AM on International Coastal Cleanup morning to take a 1.5 hour-long journey to clean Scotland Bay. This year, with the large number of volunteers who expressed interest in the cleanup, the Green Circle required a larger vessel to get to Scotland Bay. Kerrie approached the Harbour Master, whose management offered a reduced charter fee, for which the young environmentalist was extremely grateful.

He also praised main sponsor Massy Foundation for its support for another year. “Without the Foundation’s help, this year and last, rental of the vessels used to transport our crews to Scotland Bay would be out of the Green Circle’s reach.”

The Green Circle (TheGC) undertakes initiatives which promote environmental sustainability, events with a purpose, where young adults get involved in eco-friendly activities. For the third year, the Green Circle participated in Ocean Conservancy’s “International Coastal Cleanup Day” through its initiative: The Beach Clean pUmP.

Under the guidance of the Caribbean Network for Integrated and Rural Development (CNIRD,) The Beach Clean pUmP was one of a number of cleanups executed across T&T on September 16th. Entities like WASA, SWMCOL, and other corporate, private and NGO partners also took to the nation’s coasts to remove garbage in recognition of International Coastal Cleanup Day.

This year, while theGC cleaned the surface of Scotland Bay, two other organisations took the cleanup underwater - the Trinidad & Tobago Eco Divers, an NGO whose aim is to protect marine life and the University of the West Indies (UWI).

Worldwide, during the 2016 ICC activities, more than half a million volunteers from 112 countries worked tirelessly to collect over 18 million pounds of trash.

International 2017 figures are still to be tallied, however, at Scotland Bay Trinidad alone, approximately 4,117 pounds of waste (including glass waste, plastic waste and general waste) was removed from the coastline.