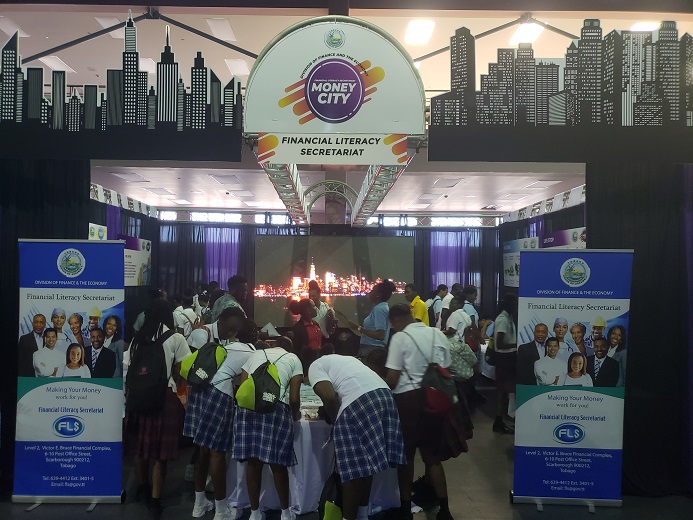 The event was hosted by the National Financial Education Committee (NFEC).

“Spend less that you earn, seek financial advice from the relevant persons or experts and invest in an activity that will bring returns”.

Global Money Week aims to raise awareness and educate youth about the importance of financial management, budgeting, saving, investing, as well as entrepreneurship.

Trinidad and Tobago joined over 160 countries in recognising this international event.

During the opening ceremony of the NEFC’s three-day event, Deputy Chief Secretary and Secretary of Finance and the Economy of the Tobago House of Assembly, Joel Jack, delivered the feature address.

Meanwhile, Stoddard brought greetings on behalf of the NFEC.

200 secondary school students were taught key financial lessons such as budgeting, saving, investing, and the value of money through drama by DMAD Company. Students and teachers also participated in fun, educational and interactive games and activities during the financial exposition, that followed and which featured approximately 20 booths from the financial and entrepreneurial sectors in Trinidad and Tobago.

On March 28, the Committee hosted 200 Primary School children from the East-West corridor. These students had the opportunity to experience a tour of the Central Bank’s Money Museum. The museum exhibit comprised various displays and activities geared towards teaching students how money is made and the instruments used to make the money, as well as the history of T&T’s money. One of the key displays included a grocery store, which demonstrated how the cost of food items had increased over a 30-year period.

Stoddard, through storytelling, gave students sound advice on wise financial management and investments. The students were also encouraged to think about becoming entrepreneurs as an alternative to seeking employment. Similarly to the celebrations in Tobago, the students enjoyed, as well as participated in, the drama presentation by DMAD Company where they were given real life scenarios that prompted them to make wise financial decisions. This was followed by an exposition where the 200 secondary school students from South and Central participated in financial and educational games and interactive activities.

Seven receive instruments of appointment to Central Bank Board