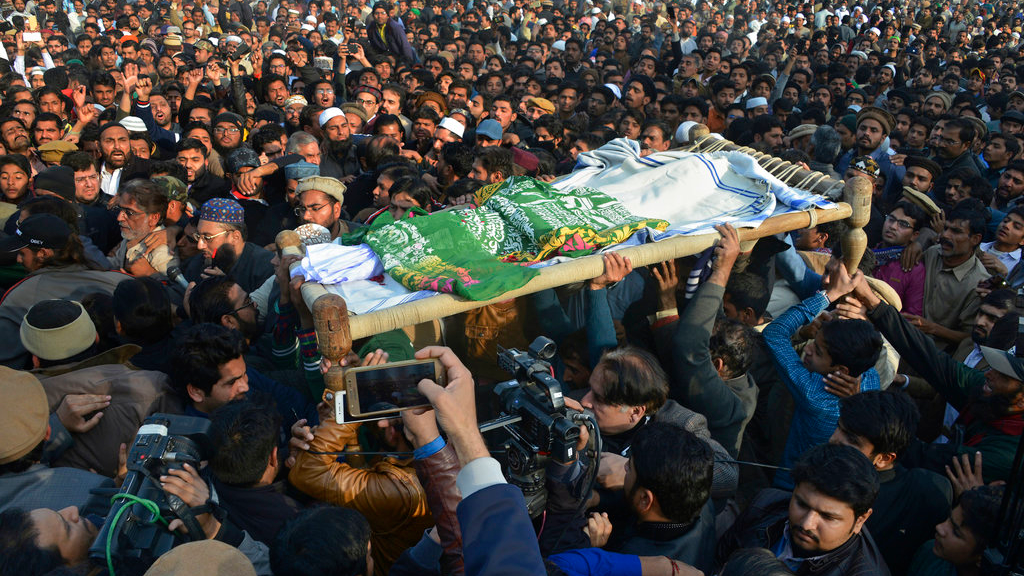 People attend a funeral of a Pakistani girl who was raped and killed, in Kasur, Pakistan, Wednesday, Jan. 10, 2018. (AP Photo/Qazi Mehmood)

A mob angered over the recent rape and murder of an 8-year-old girl attacked a police station and a nearby government building in eastern Punjab province on Wednesday, triggering clashes that left at least two people dead and several injured, the police said.

The violence erupted in the city of Kasur hours before the funeral of Zainab Ansari, whose case has drawn wide public outrage.

The girl went missing last week while going to a nearby home for Quranic studies. Her parents, who were away at a pilgrimage in Saudi Arabia at the time, returned on Wednesday, landing at the Islamabad airport.

"We will not bury our daughter until her killers are arrested," said the father, Ameen Ansari, as his wife sobbed.

Zainab's body was found on Tuesday in a garbage bin, senior police officer Imran Nawaz Khan said. Police say she was abducted, raped and murdered. Officer Maqsood Ahmed said six girls were sexually assaulted in recent months in Kasur and that police were probing whether there was a connection in the cases.

Activists on social media have condemned the government for failing to arrest those involved in the crime.

As the attack on the police station and the subsequent clashes unfolded Wednesday, local TVs broadcast footage showing police firing shots in the air and toward the stone-pelting mob, trying to disperse it. In one segment, an officer asks another to hold direct fire, after which the second officer is seen continuing to shoot at the protesters.

Zulfiqar Hameed, the police chief in Kasur, refused to say whether the two people killed in Wednesday's clashes had died from police gunshots. Provincial Law Minister Rana Sanaullah said the police were trying to contain the violence and find and arrest those involved in the girl's murder.

Firebrand cleric Tahir-ul-Qadri who took part in Ansari's funeral service demanded the local government be replaced, saying it has "no right to remain in power after the killing of Zainab Ansari."

In a speech to thousands of mourners, he blamed the Punjab chief minister, Shahbaz Sharif, for failing to "protect lives and honor of innocent girls" in the province.

Qadri also issued an ultimatum to Sharif and Sanaullah to step down by Jan. 17 to avoid street protest.

Qadri is a staunch political rival of the ruling Pakistan Muslim League party and he has led violent rallies in the capital, Islamabad, since 2014 after eight of his supporters were killed in anti-government rallies in Lahore, Punjab provincial capital.