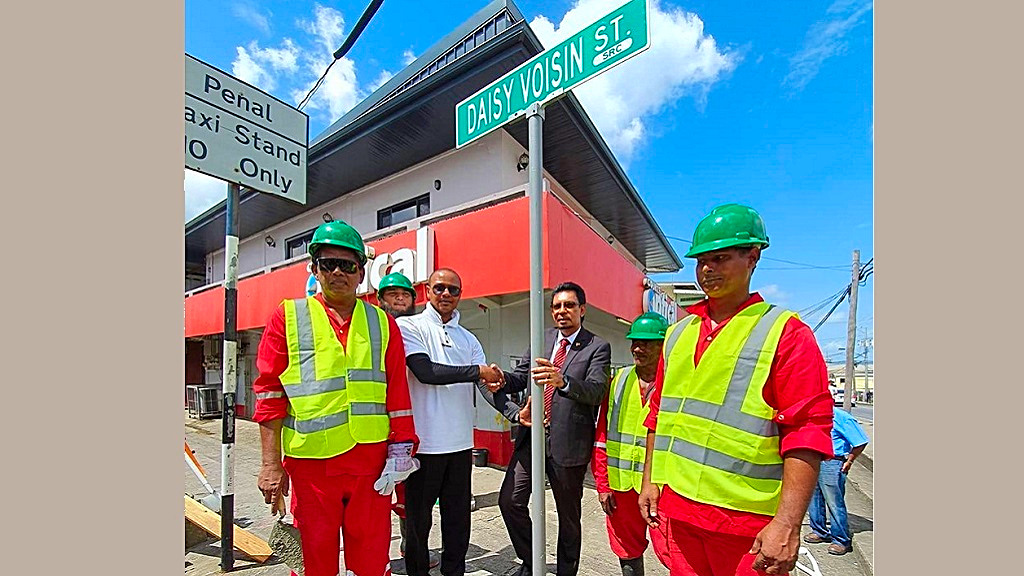 A special tribute has been paid to local parang icon Daisy Voisin with the naming of a South Trinidad street in her honour.

The Ministry of Rural Development and Local Government shared a photo of the newly named Daisy Voisin street to social media on Wednesday.

The Ministry said in a statement issued October 2, 2019 that the event marked the third instalment of the National Local Roads/Street Signage Programme in Siparia.

"The first of the new street signs to be erected on High Street, Siparia was the Daisy Voisin Street sign. It was a proud moment for the residents of Siparia and particularly for Kervin Voisin, the grandson of the late Daisy Voisin, who was also in attendance. Daisy Voisin was a pioneer in the art of parang in Trinidad and hailed from Siparia," the Ministry said.

Minister of Rural Development and Local Government Kazim Hosein encouraged regional corporations to recognise their local community heroes by having these streets named in their honour.

Speaking in an address as Irwin Park in Siparia, Hosein also praised the work of the Council and highlighted all the programmes undertaken by the Ministry to bring relief to citizens both during the National Clean-Up Campaign and recent natural disasters.

The programme was officially launched in the municipalities of Diego Martin and Mayaro/Rio Claro in June and July respectively.

Hosein said urged the Council to continue its clean-up drive and to utilize the Municipal Police and Litter Wardens to clean up the municipality,

“We need to enforce the laws of the country and charge person found guilty of illegal dumping. We also need to serve the relevant notices to persons with illegal structures and overgrown lots because it is important that we have a clean country that we all can enjoy and be proud of.”

Hosein said with the approach of local government elections it is important to have goals.

He reminded the Council that elected terms end quickly and at the end of one’s term, they should all have completed projects which bring long-lasting value and benefit to every municipality and by extension the citizens of our beloved country.

The National Local Roads/Street Signage Project continues throughout the country as 11 other municipalities will receive new street signage in the coming months.