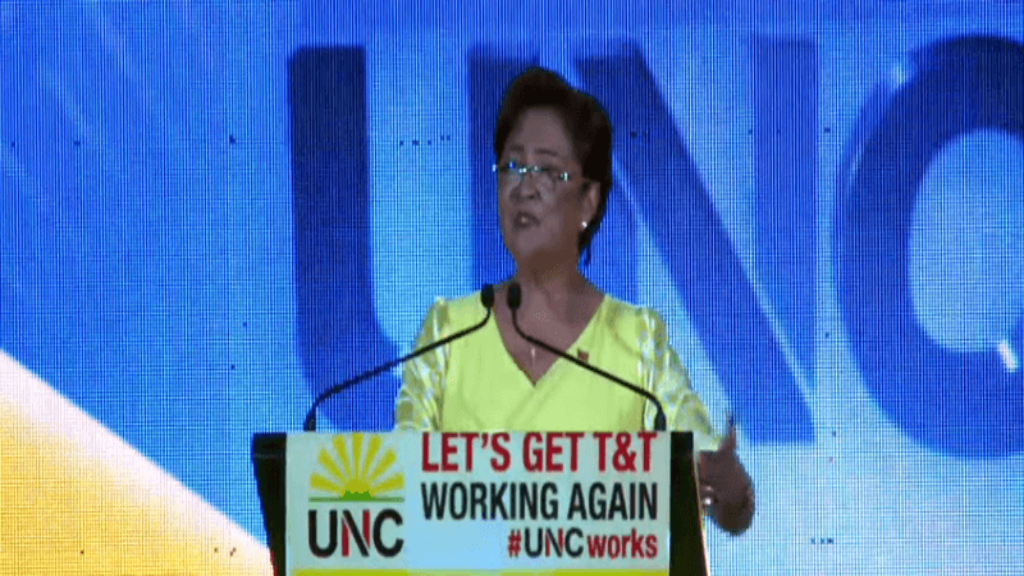 “Paria is in serious, serious trouble.”

So said Opposition Leader Kamla Persad-Bissessar at the United National Congress (UNC) Monday Night Forum in Fyzabad, as she revealed that the company is facing a monthly shortfall of US$20 million to purchase fuel.

This, she said, is a direct threat to the country’s supply of fuel.

Reading from a letter she said was “dropped in her mailbox”, penned by Trinidad Petroleum Company Ltd chairman Wilfred Espinet, dated June 7, and addressed to Energy Minister Franklin Khan, Persad-Bissessar said in just eight months of operation, the company is in “major trouble”.

“Our information is that this company, Paria, is already in serious financial trouble and this poses a significant threat to the supply of fuel to our country.”

The letter, the Opposition leader said, lists immediate concerns of the ongoing shortfall of US$20 million to purchase refined fuel for national supply.

“This is a structural problem… it is going to result in a shortage of fuel unless corrected.”

She questioned whether this meant that the company was haemorrhaging money and would raise the cost of fuel at the pumps to make up the shortfall.

The UNC leader said the current situation is the direct result of the decision to shutdown Petrotrin with no plan “post-Petrotrin”.

"Whatever it means, it is clear as day that Paria Fuel Trading, the company with the sole responsibility for importing this country’s fuels (super, diesel, premium, kerosene and jet fuel) is in big trouble."

"This is what you get when you shut down Petrotrin and you had no plan post-Petrotrin. This decision to close down Petrotrin will be the biggest economic debacle in the history of this country. They have made a complete mess of what was Petrotrin."

Persad-Bissessar warned that this would be the biggest economic debacle in Trinidad and Tobago’s history.

She noted that Paria was not the only company in the industry in trouble as the National Gas Company (NGC) is in a similar position, owing to what she called the "Houston Hustle".

Criticising a March 2017 trip to Houston in which Prime Minister Dr Keith Rowley and a Government delegation negotiated gas prices with EOG resources, she said they have placed the company, which was once in a profit-making position, in serious trouble.