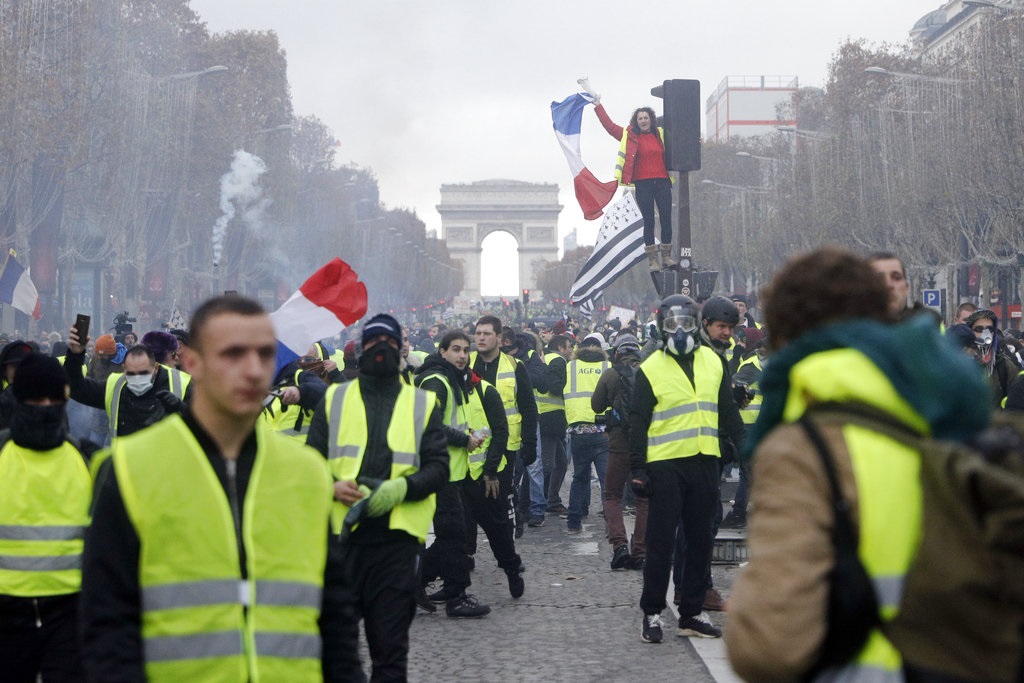 In this Nov. 24, 2018, file photo, demonstrators march on the famed Champs-Elysees avenue in Paris, France, as they protest the rising of the fuel prices. “Yellow vest” protests have gripped France for four weeks, blocking highways from Provence to Normandy and erupting in rioting in Paris. They’ve shaken the country to its core and left President Emmanuel Macron struggling to retain control. (AP Photo/Kamil Zihnioglu, File)

Anticipating a fifth straight weekend of violent protests, Paris' police chief said Friday that armoured vehicles and thousands of officers will be deployed again in the French capital.

Michel Delpuech told RTL radio that security services intend to deploy the same numbers and strength as last weekend, with about 8,000 officers and 14 armoured vehicles again in Paris.

Delpuech said the biggest difference will be the deployment of more groups of patrol officers to catch vandals, who last weekend roamed streets around the Champs Elysees, causing damage and looting. Police arrested more than 1,000 people in Paris last weekend and 135 people were injured, including 17 police officers

A sixth "yellow vest" protester was killed this week, hit by a truck at a protest roadblock. Despite calls from authorities urging protesters — who wear the fluorescent safety vests that France requires drivers to keep in their cars — to stop the protests, the movement rocking the country has shown no signs of abating.

"Last week, we pretty much handled the yellow vests but we also witnessed scenes of breakage and looting by criminals," Delpuech said. "Our goal will be to better control this aspect."

In an effort to defuse the tensions sweeping the country, French President Emmanuel Macron has acknowledged he's partially responsible for the anger behind the anti-government protests. He has announced a series of measures aimed at improving French workers' spending power but has refused to reinstate a wealth tax.

Many protesters have expressed disappointment at the measures and some trade unions are now calling for rolling strikes across the country.

"The best action is to go on strike," said Philippe Martinez, the head of leftist trade union CGT. "There are inequalities in this country and we need to make big company bosses pay."

French Interior minister Christophe Castaner urged protesters to express themselves peacefully in the wake of a two-day manhunt for a man suspected of killing three people in the eastern city of Strasbourg that mobilized hundreds of police.

"I can't stand the idea that today people applaud police forces and that tomorrow some people will think it makes sense to throw stones at us," Castaner said from Strasbourg, where the suspect was killed on Thursday.