PART 2: Some of the biggest, most absurd scandals to hit UNC and PNM

As we continue our review of scandals which have tainted the two main political parties, we look at a Prime Minister accused of having marijuana on their property and an Attorney General whose children were allegedly photographed with high powered rifles.

Check out these scandals and more: 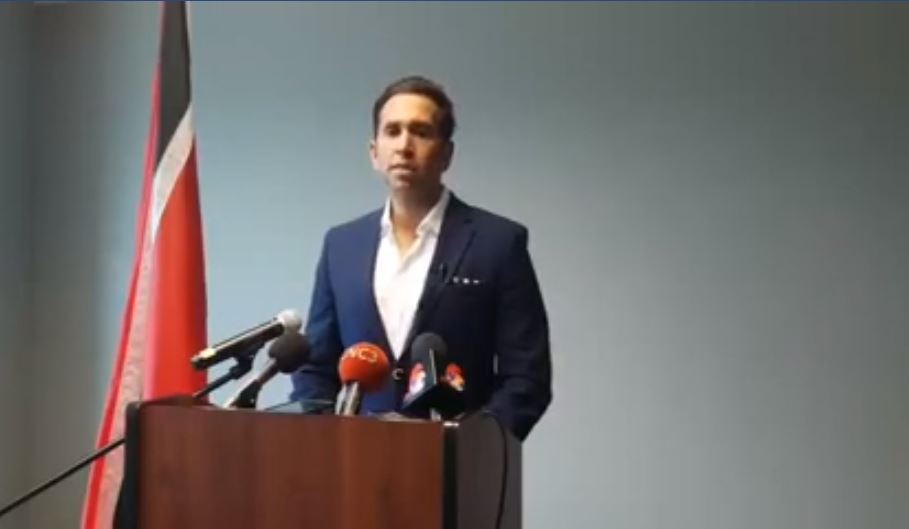 The Government was reportedly paying $8.2 million per year for One Alexandra Place located at 3 Alexandra Street, Port of Spain.

First leased in 2009, the building is owned by Attorney General Faris Al-Rawi and his wife, Mona Nahous. It remained unoccupied until 2016, racking up more than $165 mil­lion in just un­der ten years.

The Public Utilities Ministry was the first sector of the state to move into One Alexandra Place. In 2019, the Government moved the office of the Chief Personnel Officer to the building. The rental prop­er­ty lo­cat­ed has been leased for a pe­ri­od of three years at a month­ly rental of $575,000 plus VAT.

The AG and Government officials including the Prime Minister have denied any conflict of interest. The AG said he has not taken part in any meetings, leaving the room, to prevent any conflict.

Opposition Leader Kamla Persad-Bissessar has since called on the police and Integrity Commission to investigate the matter. 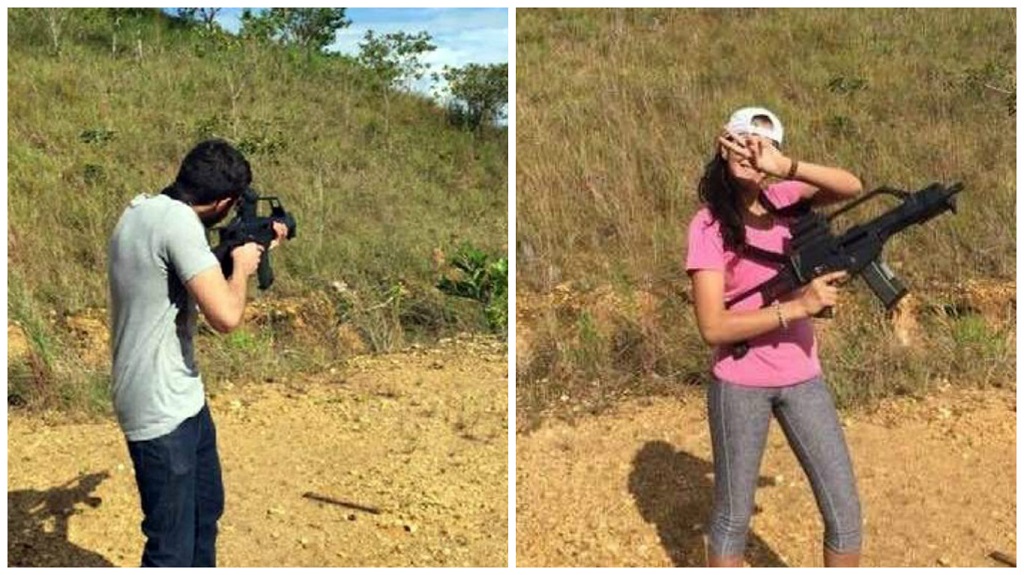 Attorney General Faris Al-Rawi called a media conference shortly after, implying that his children were the ones being referred to. He told reporters that there was a threat to against him and his family. As a result, a threat assessment was carried out by security agencies.

Al-Rawi said the agencies found it necessary for his family to receive training in keeping with international protocols. They were subsequently taken to the camp Cumoto army base for training.

A police probe was launched by acting Police Commissioner Harold Phillip. The Express had reported that there was no written police record that Al-Rawi received any death threats that prompted the gun training for his two young children.

The training reportedly occurred on October 31, 2015.

The matter is still being investigated. 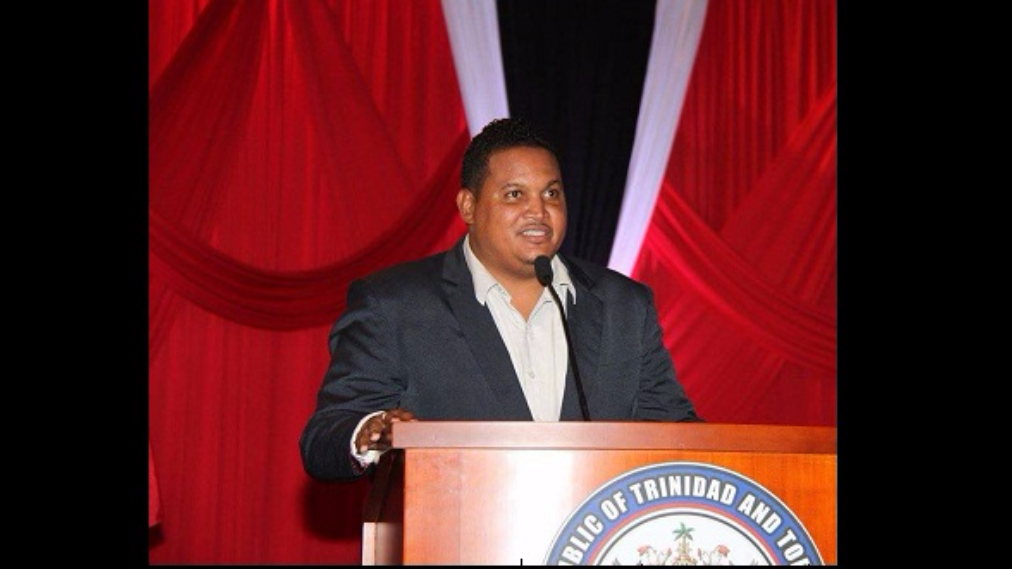 Why? His Ministry settled a wrongful dismissal case to the tune of $150,000.

Former employee Carrie-Ann Moreau had accused Smith of sexual harassment. Soon after, she was fired.

Smith was demoted to junior Minister in the Ministry of Housing on April 9, 2019, but was fired one day later.

The letter from the Office of the Prime Minister noted that this followed a meeting between Prime Minister Dr Keith Rowley, Planning Minister Camille Robinson-Regis and Smith.

The Prime Minister said he discovered new information which resulted in the appointment of a committee to thoroughly review the circumstances surrounding the dismissal and payment of compensation to Moreau.

The findings of that report have not yet been made public.

He's still the member of parliament for Diego Martin, Central.

Ganjagate: Weed found on the property of former PM 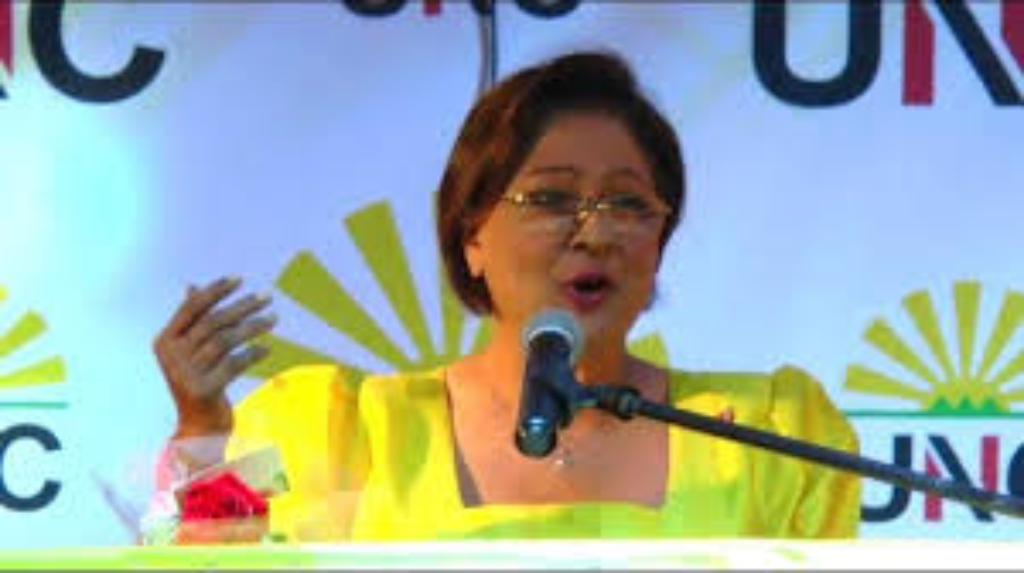 In April, a special branch officer found “a plant-like substance” in the gazebo of the men’s washroom of then Prime Minister Kamla Persad-Bissessar’s home at Philippines, Penal. The substance was later confirmed to be marijuana.

After five years, in 2019, the investigation was brought to a close.

Police Commissioner Gary Griffith told reporters during a media conference on June 5, 2019 that no charges will be brought against Persad-Bissessar or anyone for that matter.

He said the marijuana was found while Persad-Bissessar was out of the country and, at any point in time, there could have been up to 70 people that had full access to the yard including gardeners, drivers, soldiers, police officers, etc. 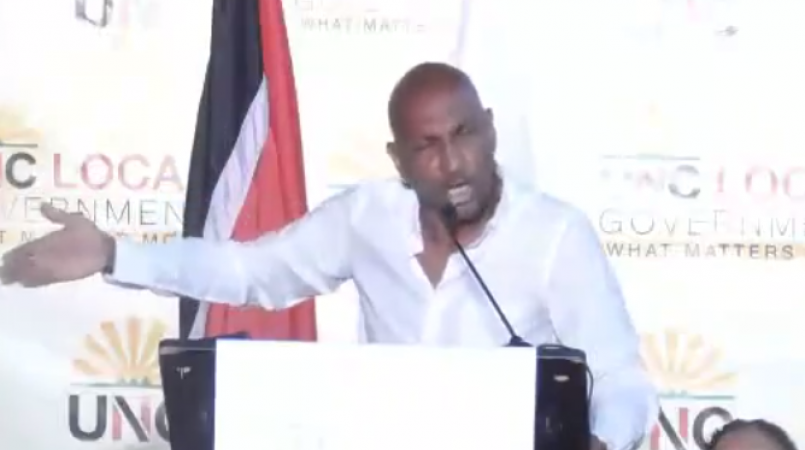 Sports Minister Anil Roberts was allegedly caught on tape rolling what appeared to be a spliff as he partied with a young woman, video cameraman and friends.

When the footage became public, Roberts denied it was him.

Two months later, he was embroiled in scandal again, this time with the Life Sport programme.

In July, the Central Audit Committee (CAC) released a report into the programme which was managed by the Sports Company of Trinidad and Tobago (SporTT). Life Sport was created to help at-risk young men between the ages of 16-25 and was be­ing run in 43 cen­tres through­out T&T. The programme was launched in June 2012 and officially started in August 2012.

The CAC report unearthed fraudulent activity, theft, ques­tion­able pay­ments, alleged criminal infiltration and other criminal activities. In May, then Prime Minister Kamla Persad-Bissessar ordered the programme moved from under the Sports Ministry to the National Security Ministry led by Gary Griffith. She also called for the audit.

Griffith unearthed improprieties including the payment of some $18 million to Life Sport Carapo coordinator Rajaee Ali, a Jamaat al-Muslimeen member.

As a result, there was a threat to expel the Carapo segment of the programme. After this announcement, some officials were reportedly put on a hit list; Ruth Marchan, the deputy director of Physical Education and Sport at the Ministry of Sport; Curtis “Tallman” Gibson; Life Sport director Cornelius Price and two other Sport Ministry officials.

Marchan was placed in the police protection programme and hired Gibson to be her bodyguard. He was murdered days after reporting death threats.

Rajae Ali's appointment as a coordinator in the programme was particularly interesting as he was known to police.

Ali was arrested and charged in 2004 for the murder of Hayden Sin-Clair Douglas. In 2007 he was among three men who escaped the Golden Grove Prison and were considered armed and dangerous. In 2011 the case was dismissed as the witnesses either recanted their stories, were dismissed or killed and in 2012 he was hired for Life Sport. In 2015 Ali was among 11 arrested for the murder of Senior Counsel Dana Seetahal.

Millions of dollars was squandered at Life Sport as there were reports of ghost participants and at least four ghost companies, one of which received $34 million with no work done.

Roberts tendered his resignation as Sports Minister on July 31, 2014 after mounting pressure against him.

Meanwhile, in 2016, a High Court Judge quashed the 2014 audit report. Justice Mira Dean-Armorer in an oral ruling in the Port-of-Spain High Court ruled that the former Sport Ministry permanent secretary Ashwin Creed and several LifeSport officials including Sport Minister Anil Roberts were not given an opportunity to be heard before the final report was completed and made public in Parliament by then former prime minister Kamla Persad-Bissessar.

Did a Government Minister hit their ex-girlfriend? 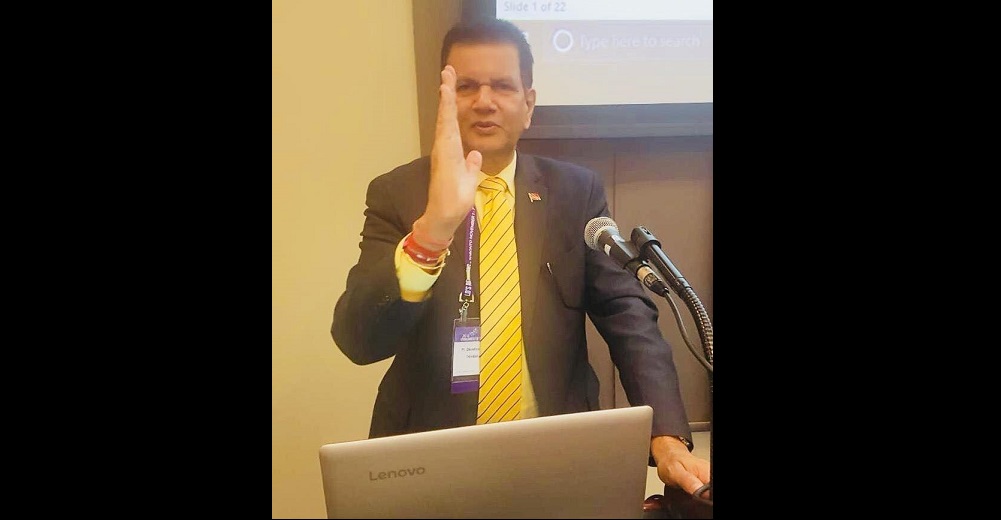 In March, Chandresh Sharma was Tourism Minister when his ex-girlfriend Sacha Singh accused him of domestic violence which occurred in the carpark of Grand Bazaar near Toppers restaurant.

Singh, the managing director of AMS Biotech Security Concept and AmSure T&T Ltd reported to the St Joseph Police that she and Sharma got into an altercation over him maintaining a 12-year-old child. The child was in the back seat of her vehicle with her mother, a teacher.

An altercation ensued and the adults exited the vehicle. Singh reportedly grabbed onto Sharma’s tie and was slapped across the face and pushed. She allegedly hit her head on her vehicle and suffered a concussion and brain swelling which she discovered after a visit with her doctor.

Sharma was fired in the same month after the allegation. In July, the Director of Public Prosecution wrote to acting Police Commissioner Stephen Williams saying that the allegations of assault were “uncorroborated and may be hobbled by certain credibility factors.” 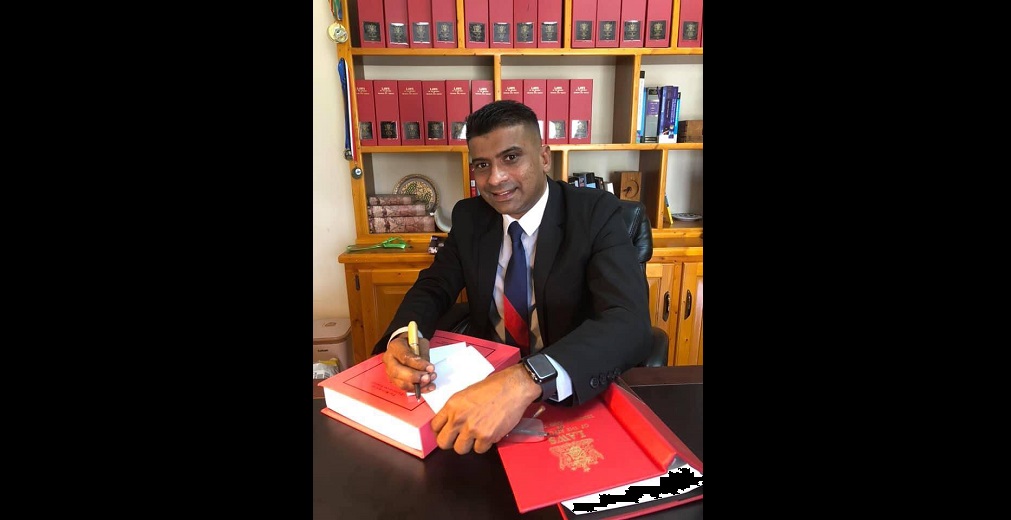 Caroni Central MP Dr Glenn Ramadharsingh was fired as Minister of the People and Social Development for a row with an airline hostess who alleged he had touched her breast, a claim he denied.

It was March that year that Ronelle Laid­low said Ramadharsingh grabbed her breast when he reached for her badge.

He told members of the media that he had gone on a family trip to Tobago and left early because he was ill. He also claimed his doctors informed him he was suffering from fatigue due to his rigid schedule. Ramadharsingh said he had concerns about his luggage which were a distance away from him but he said he was seated at a private area at the back of the plane due to his feeling unwell.

He attributed that for the confrontation with the air hostess.

He was fired within the same month.

Ramadharsingh is now chairman of the Siparia Regional Corporation. 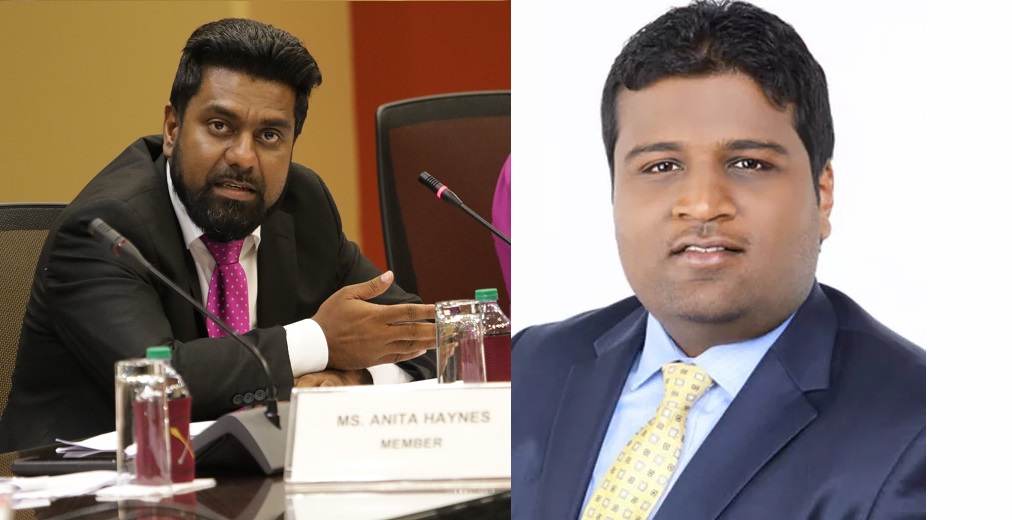 In May, the Director of Public Prosecutions, Roger Gaspard, ordered a probe into prison litigation matters and the prospect of criminal wrongdoing.

It followed a letter sent by former solicitor general Elandor Donaldson-Honneywell to then Prime Minister Kamla Persad-Bissessar in August 2013. Donaldson-Honeywell flagged concerns of col­lu­sion in­volv­ing at­tor­neys in cas­es against the state.

She claimed there were con­cerns about a breach of pro­fes­sion­al ethics for in­di­rect or di­rect fi­nan­cial gain, adding that she was con­cerned the at­tor­neys were en­gaged in an un­eth­i­cal busi­ness ven­ture. She also referred to the retaining of lawyers by the Office of the AG to defend the state in civil law claims. However, those said attorneys challenged the state in prison matters.

Then, there was another alarming discovery; prisoners' injuries were ‘copy and paste’ in many cases and the evidence wasn’t able to substantiate such injuries. The attorneys involved were former UNC Senator Gerald Ramdeen and Varun Debideen. Ironically, Ramdeen representated the state in civil matters.

The practice was first unearthed by High Court Master Patricia Sobion-Awai in an assault and battery lawsuit filed by Jamal Sambury. The ruling was referred to the Disciplinary Committee of the Law Association. This, is why the DPP ordered a probe into what he said could be a criminal conspiracy to pervert the course of public justice and conspiracy to defraud the State.

The Prisongate investigation is no longer limited to just the alleged “cutting and pasting” of witness statements but has taken on a more organised crime element which has seen millions of dollars pocketed by attorneys.

The lawyers successfully won cases against the state for damages to be paid to the appellants who in many cases were less fortunate members of society. Reports say the majority had their matters heard and they won.

However, they weren't even aware that their cases were challenged. Some of the matters where the state awarded "too little damages" were appealed without their knowledge. Witness statements and claim forms bore their names but fradulent signatures.

Merrick was jailed for marijuana possession but was not released on the initial and in 2008, was ultimately awarded $35,000 for unlawful imprisonment. The matter as appealed and his award was increased to $200,000. Two cheques were issued in Ramdeen's name.

Merrick reportedly tried to get his money for nine years, to no avail. He died waiting.