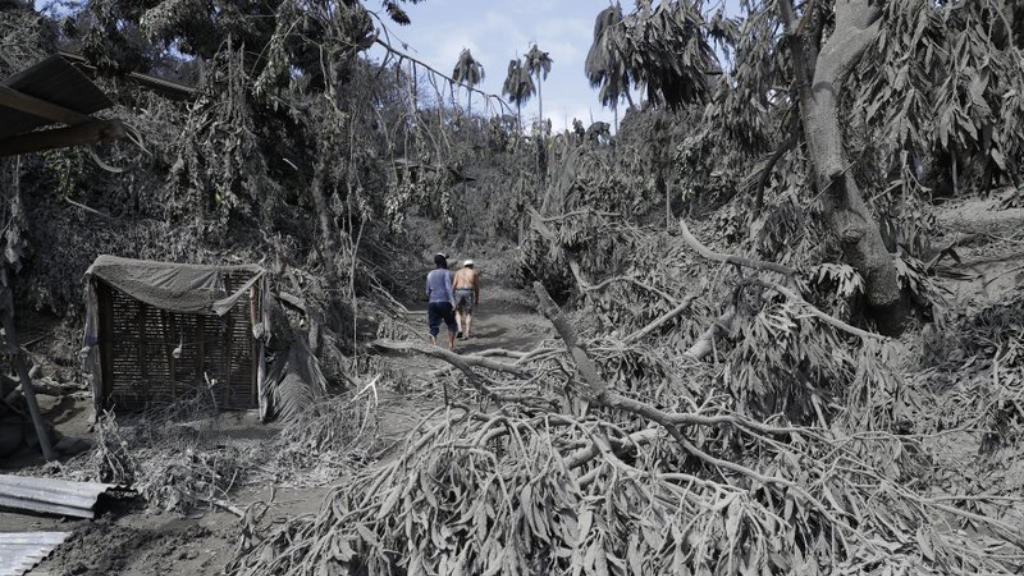 Philippine officials said Sunday the government will no longer allow villagers to return to a crater-studded island where an erupting volcano lies, warning that living there would be "like having a gun pointed at you."

Taal volcano has simmered with smaller ash ejections in recent days after erupting on January 12 with a gigantic plume of steam and ash that drifted northward and reached Manila, the capital, about 65 kilometres (40 miles) away. While the volcano remains dangerous, with large numbers of local villagers encamped in emergency shelters, officials have begun discussing post-eruption recovery.

Interior Secretary Eduardo Ano said officials in Batangas province, where the volcano is located, have been asked to look for a safer housing area, at least 3 hectares (7 acres) in size, for about 6,000 families that used to live in four villages and worked mostly as tourist guides, farmers and fish pen operators on Volcano Island. The new housing site should be at least 17 kilometres (10 miles) away from the restive volcano to be safe, he said.

The island has long been declared by the government as a national park that's off-limits to permanent villages. The government's volcano-monitoring agency has separately declared the island a permanent danger zone, but impoverished villagers have lived and worked there for decades.

"We have to enforce these regulations once and for all because their lives are at stake," Ano said, adding that closely regulated tourism work could eventually be allowed on the island without letting residents live there permanently.

Philippine President Rodrigo Duterte has approved a recommendation for the island to be turned into a "no man's land," but he has yet to issue formal guidelines. After an initial visit last week, Duterte plans to return to hard-hit Batangas province on Monday to check conditions of displaced villagers, Ano said.

Although it's one of the world's smallest volcanoes, the 311-meter (1,020-foot) -high Taal is the second most-active of 24 restive Philippine volcanoes. The Philippine Institute of Volcanology and Seismology has placed Taal and outlying cities and towns at alert level 4, the second-highest warning, indicating a more dangerous explosive eruption is possible within hours or days due to fewer but continuous earthquakes and other signs of restiveness.

"They lived on the volcano itself with 47 craters. That's really dangerous. It's like having a gun pointed at you," Renato Solidum, the head of the volcanology institute, told The Associated Press.

Taal left more than 200 people dead in a powerful 1965 eruption, then again exploded in 1977. Officials of the government institute said they began issuing advisories about Taal's renewed restiveness as early as March last year, helping local officials prepare and evacuate thousands of villagers rapidly from Volcano Island hours before the volcano erupted thunderously.

Lucia Amen, a 45-year-old mother of six, said she started packing up clothes in bags in November after hearing from her children that their teachers were warning that the volcano was acting up again. When the volcano erupted, she said she was ready with her family and rapidly moved out of Laurel town, which lies near Volcano Island.

Amen wept quietly Sunday while attending Mass in an evacuation center in Tagaytay city in Cavite province, saying she was worried about her children as the eruption dragged on.

A senator from Batangas, Ralph Recto, has recommended the creation of a commission to oversee the recovery of the volcano-devastated region. It will be similar to a government body that was established after Mount Pinatubo's 1991 eruption north of Manila.

A long-dormant volcano, Pinatubo, blew its top in one of the biggest volcanic eruptions of the 20th century, killing hundreds of people and devastating the Philippines' main rice-producing region.

The disaster-prone Philippines lies along the Pacific "Ring of Fire," a string of faults around the ocean basin where many of the world's earthquakes and volcanic eruptions occur.