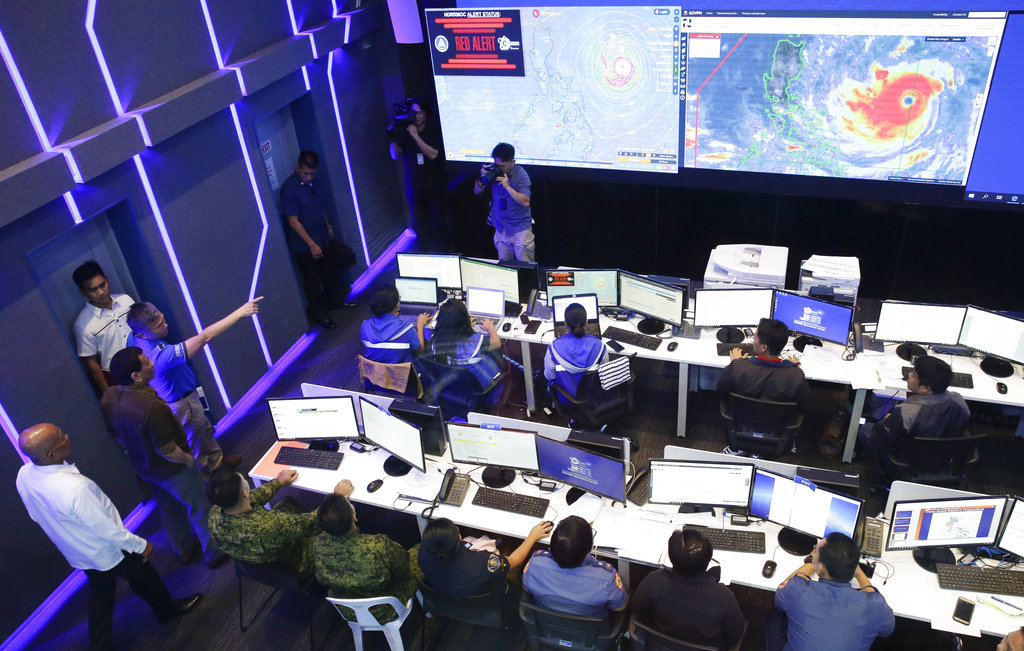 Philippine authorities began evacuating thousands of people Thursday in the path of the most powerful typhoon this year, closing schools, readying bulldozers for landslides and placing rescuers and troops on full alert in the country's north.

The Joint Typhoon Warning Center in Hawaii categorized the storm as a super typhoon with powerful winds and gusts.

Forecasters said Typhoon Mangkhut could hit northeastern Cagayan province on Saturday. It was tracked on Thursday about 725 kilometers (450 miles) away in the Pacific with sustained winds of 205 kilometers (127 miles) per hour and gusts of up to 255 kph (158 mph), they said.

With a massive raincloud band 900 kilometers (560 miles) wide, combined with seasonal monsoon rains, the typhoon could bring heavy to intense rains that could set off landslides and flash floods, government forecasters said. Storm warnings have been raised in 25 provinces on the main northern island of Luzon, restricting sea travel.

Office of Civil Defense chief Ricardo Jalad said more than 4 million people in the northeastern provinces of Cagayan and Isabela and outlying provincial regions are vulnerable to the most destructive effects near the typhoon's 125-kilometer (77-mile) -wide eye. Nearly 48,000 houses in those high-risk areas are made of light materials and vulnerable to Mangkhut's ferocious winds.

Cagayan Gov. Manuel Mamba said by telephone that evacuations of residents from risky coastal villages and island municipalities north of the rice-and corn-producing province of 1.2 million people have started and classes at all levels have been canceled.

"The weather here is still good but we're moving them now because it's very important that when it comes, people will be away from peril," Mamba said.

The typhoon was slightly changing its track, Mamba said, adding that authorities needed to rapidly reassess where to redeploy emergency teams and supplies.

The typhoon is approaching at the start of the rice and corn harvesting season in Cagayan, a major agricultural producer, and farmers were scrambling to save what they could of their crops, Mamba said. The threat to agriculture comes as the Philippines tries to cope with rice shortages.

President Rodrigo Duterte canceled his appearance at a missile test firing aboard a navy ship off northern Bataan province due to the approaching typhoon and instead led a meeting with disaster-response agencies and defense officials in Manila.

On Guam, where Mangkhut has passed, residents woke up Tuesday to flooded streets, downed trees and widespread power outages. Government agencies were conducting damage assessments and beginning to clear roads, according to the Pacific Daily News.

About 80 percent of the U.S. territory was without power but it was restored by Thursday morning.

Mangkhut, a Thai word for mangosteen, is the 15th storm this year to batter the Philippines, which is hit by about 20 a year and is considered one of the world's most disaster-prone countries. Typhoon Haiyan left more than 7,300 people dead or missing and displaced over 5 million in the central Philippines in 2013.